Gold miner has much work to gain consent for mine near Iskut North of 60 Mining News - April 6, 2022 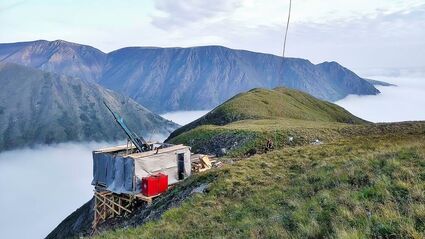 A drill explores the Tatogga project prior to Newmont's acquisition of this copper- and gold-rich project near the Tahltan community of Iskut in northwestern British Columbia.

Tahltan Central Government says Newmont Corp.'s plans to turn over properties to the Tahltan Nation for land use planning does not address all the concerns its people have about the gold mining company's plans for development on a large gold-copper project near the community of Iskut, British Columbia.

"The Tahltan Central Government is clear to outside governments, industry and the world that working alongside the Tahltan Nation as true partners is a must. No exceptions," said Tahltan Central Government President Chad Norman Day. "All projects within Tahltan Territory must first obtain the consent of Tahltan people otherwise they will not be supported or successful."

The roughly 96,000-square-kilometer (37,000 square miles) Tahltan Territory covers approximately 70% of the Golden Triangle, a particularly mineral-rich region of northwestern BC that has become a popular destination for mineral exploration and mining companies.

Last year, the Tahltan Central Government announced it was working with the provincial government to negotiate and reach an agreement on strategies to be piloted on an interim basis to address immediate Tahltan concerns over the pace and scale of mineral development near the community of Iskut, as well as areas of cultural importance to the Tahltan.

Red Chris, a copper-gold mine owned by Newcrest Mining Ltd. (70%) and Imperial Metals Corp. (30%), already operates about 10 miles (16 kilometers) southeast of Iskut. Newmont hopes to develop a similar mine at the North Saddle deposit, which is only about four miles (six kilometers) southwest of the Tahltan community, on the Tatogga project the world's largest gold mining company acquired last year for US$331 million (C$393 million).

This property deal is dependent on Skeena's successful acquisition of QuestEx Gold & Copper Ltd., a mineral exploration company with a large land position in Tahltan Territory.

Recognizing the need for Tahltan consent to advance a mine at North Saddle, Newmont said it will work with the local, First Nation, and provincial governments to make portions of the properties it acquires from Skeena available to support the land use planning objectives of the Tahltan Nation and the Iskut community.

"We are acquiring the land in an effort to address concerns raised by the Tahltan Nation. The mining claims around Iskut are not being purchased for development or their mineral potential," said Newmont President and CEO Tom Palmer.

Further information on the proposed three-way land deal between Newmont, Skeena, and QuestEx can be read at Newmont to acquire land for Tahltan use and Skeena makes big move in Golden Triangle in the April 1, 2022 edition of North of 60 Mining News.

While the Tahltan Central Government recognizes Newmont's efforts and celebrates the opportunity these steps create, it does not necessarily endorse the three-way lands deals and says the North Saddle Mine "journey is far from over."

"These are our lands. Visitors must honour our title, rights, and cultural practices as we work together in the best interests of Tahltan people. That is the pathway to certainty for all," said Day. "Our Nation continues to safeguard our way of life. It is our responsibility to protect what is important to us."

To accomplish this, the Tahltan Central Government has been working to develop a strong relationship with the BC government that is focused on advancing Tahltan self-determination, shared environmental stewardship, and sustainable economic development. 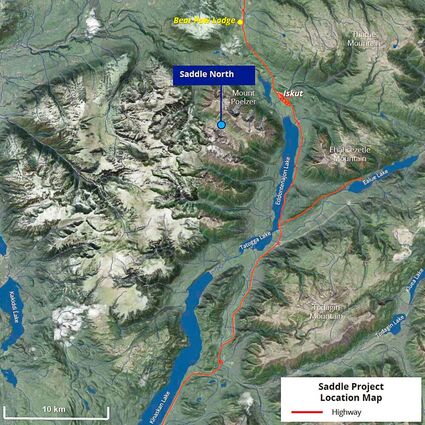 This collaboration is connected to the Tahltan Stewardship Initiative, an enterprise launched in December that applies Tahltan knowledge and worldview toward conserving wildlife, managing economic development, and protecting the environment in the Tahltan Territory.

"The TSI is an important part of our journey and story as a Nation," said Day. "Caring for our lands, fish, and wildlife is part of who we are. The launch of our new TSI website will support Tahltans to contribute their knowledge and collective voices to the effort."

Through this initiative, the Tahltan Nation is further asserting that companies planning to develop resources in its traditional territory must first obtain the consent of the Tahltan people.

As for Newmont's aspirations to develop a mine at North Saddle, the Tahltan Central Government says "there is much work left to do."