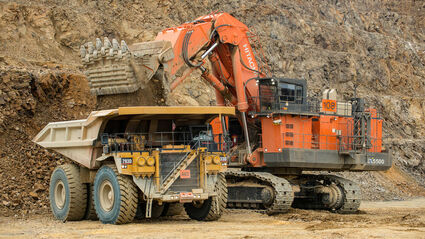 Roughly 13 million metric tons of ore averaging 0.17 g/t gold was stacked on the Barnes Creek heap leach pad at Fort Knox during the first quarter of this year.

A drop in gold production during the first quarter at Fort Knox is an annual event that results from the often-subzero temperatures during the coldest winter days affecting gold recoveries from the heap leach pad at this operation 25 miles north of Fairbanks, Alaska.

The per-ounce cost of Fort Knox gold sold during the first quarter of this year was US$1,276, a 28% jump from the US$996/oz production cost of sales during the previous quarter. This cost increase is mostly due to the lower quarterly gold output. The company, however, said increased costs related to contractors, reagents, power, and fuel were also contributing factors.

Kinross also reported that a feasibility study for developing a mine at Manh Choh, a road-accessible high-grade gold project in eastern Alaska, remains on track for completion by the end of the year.

With the idea of processing high-grade ore from Manh Choh in the mill at Fort Knox, Kinross paid US$93.7 million to buy a 70% interest in this project from Contango ORE Inc.

Most of this work is in support of a feasibility study that details plans for trucking high-grade ore mined from Manh Choh roughly 240 miles to the Fort Knox mine for processing. Without the need to build a mill and tailings storage facility at Manh Choh, this proposal is considered to be the most economical and environmentally sound option for recovering the more than 1 million oz of gold on lands owned by the Alaska Native Village of Tetlin.

Interior Alaska residents, however, have raised concerns about the safety of having two to four trucks per hour making round trips between Manh Choh and Fort Knox.

Alaska Department of Transportation & Public Facilities is carrying out an independent analysis of the proposal to truck ore along the Alaska and Steese highways that connect Manh Choh to Fort Knox.

A transportation advisory committee that includes representatives from a wide variety of viewpoints is being assembled to participate in the analysis, review the work, and make final recommendations.

This partially assembled committee includes representatives of the communities along the proposed ore haulage route; Interior Alaska Native groups; advocacy groups both for and against the plan to truck ore from Manh Choh to Fort Knox; and state and federal government agencies.

"I do believe we can have both safe highways and resource development," said Alaska Department of Transportation & Public Facilities Commissioner Ryan Anderson. "This transportation advisory committee and the independent Corridor Analysis are good tools to assure the public that we have balanced the needs and have the right plan in place to deal with this, or other future development along our highways."

The Peak Gold JV proposes using trucks similar to this for transporting two to four loads of ore per hour from the Manh Choh project to the mill at Kinross Alaska's Fort Knox Mine.

Kinross expects initial production to begin at Manh Choh by the end of 2024, dependent on a positive decision on the permits applied for last year.