Strong prospective property as shown from historical records North of 60 Mining News – May 27, 2022 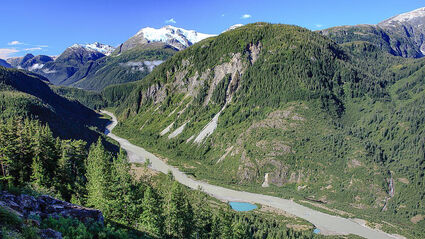 Blackwolf Copper and Gold Ltd. May 25 announced that it has staked the Mineral Hill gold-silver project, the fourth claim group the company has acquired on the Alaskan side of the Golden Triangle.

Located northwest of the towns of Stewart, British Columbia, and Hyder, Alaska, the property is contiguous with the company's high-grade Cantoo vein, which the company acquired late last year, and Ascot Resources' Premier Gold project across the international boundary to the east.

A total of 60 federal and four state mineral claims were staked.

"With the staking of Mineral Hill, Blackwolf now has a five-kilometer-long (3.1 miles) trend of high-grade gold-silver prospects located adjacent to a mine currently in development, that have never been drilled or explored with modern methods and deposit models," said Blackwolf Copper and Gold President and CEO Rob McLeod. "We look forward to evaluating and advancing multiple prospects on these new claims as well as drilling the adjacent Cantoo prospect during the 2022 season."

Despite significant exploration activity in Canada, virtually no modern exploration has been performed in the Cantoo-Mineral Hill area on the Alaska side of the border since the 1930s. Further still, bridge washouts in the early 1960s limited road access to the properties, adding to the difficulty of exploring this region for many decades.

The geology of Mineral Hill is underlain primarily by earliest Jurassic Hazelton volcanic rocks and associated intrusives, similar to what is found at the Premier property.

At the Top prospect, 18 representative and grab samples were collected in 1995 from historic trenches by U.S. Department of Mines geologists. Samples ranged from trace to 48.03 grams per metric ton gold and trace to 100.8 g/t silver, averaging 5.97 g/t gold and 23 g/t silver. 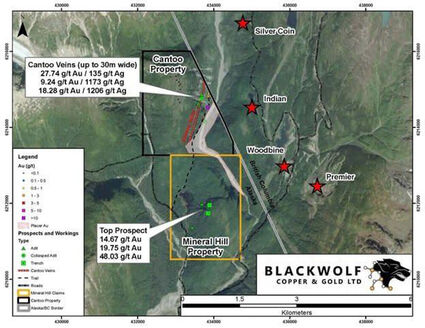 Top is located approximately 3,000 meters south of the large, outcropping gold-silver veins and breccias on the company's Cantoo property. Multiple historic prospects and adits have occurred between Top and Cantoo and include anomalous copper values (chip samples include a 1.1 meter chip at 0.17% copper, and a 0.2 meter chip at 0.51% copper) and gold-silver assays (a 1.3 meter chip at 2.43 g/t gold, and 72 g/t silver). Additionally, there is significant alluvial placer gold occurrences on the east and west side of the Cantoo and Mineral Hill properties.

Adding another strong prospective claim to its portfolio, Blackwolf is setting itself up to make significant discoveries in the overlooked Alaska extension of the Golden Triangle in the years to come.