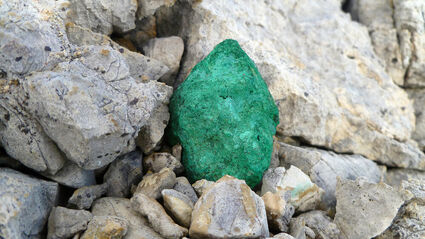 Oxidized copper at the Storm project in Nunavut.

American West Metals Ltd., a junior led by two mining industry veterans from Australia, has returned to the Arctic this year for a second field season in pursuit of rich deposits at the Storm Copper project on Somerset Island in northeastern Nunavut.

In March 2021, American West took an 80% earn-in option from Aston Bay Holdings Ltd. on the Storm project, which is located 20 kilometers (12.4 miles) from tidewater near Aston Bay, along with the nearby Seal Zinc deposit.

American West agreed to spend a minimum of C$10 million on qualifying exploration expenditures on the Storm property and nearby prospects over a period of up to nine years, including not less than C$2 million in spending during the first two consecutive field seasons.

American West also agreed to make a cash payment of C$500,000 to Aston Bay on closing the deal.

The junior went public in late 2021 and is currently trading on the Australian Stock Exchange. It is also pursuing interests in two base metal mining projects in Utah.

During its first field season, American West conducted electromagnetic surveys of the Storm and Seal properties and tested ore extracted from an area of high-grade mineralization at Storm, where hypogene copper mineralization is present at surface and identified to a depth of at least 100 meters on the property in the form of chalcocite, bornite, covellite and chalcopyrite.

Now, American West says it is considering developing the high-grade copper deposits at Storm in a way that could potentially deliver rapid returns to investors.

The test work is the first of its kind on mineralization at Storm. The DSO material, primarily chalcocite, has no impurities and could potentially form the basis for a low-footprint and low-capital development option.

Dave O'Neill, managing director of American West, said the ability to produce a direct shipping copper product at Storm is the result of "an uncomplicated and low-cost process that is game changing for this project" and plays to the junior's strategy of developing very low footprint operations.

"The process of generating DSO at Storm is amazingly simple and highlights our company's focus on generating ESG sensitive mining solutions. Storm Copper now stands out as one of the very few, and highest-grade DSO copper projects globally," O'Neill said.

The simple nature of the copper mineralogy and host rocks of the Storm Copper project indicate that it may be amenable to upgrading through beneficiation processing techniques, according to Aston Bay Holdings.

This testing was carried out on a sample derived from preserved core from STOR1601D, a 2016 hole that was drilled within the eastern 4100N zone of the Storm project. The selected four-meter interval from between 97 meters and 101 meters down hole was composited and included roughly 5.5 kilograms of material with an average grade of 4.16% copper. The test sample is considered representative of the high-grade copper mineralization discovered so far at Storm.

The composite sample was crushed to a size fraction of 10-25 millimeters, which is the optimal size range for the full-scale ore-sorting equipment. The crushed material was washed before it was processed. A minor fraction of fines was lost during crushing.

A combination of X-ray transmission and 3D laser sensors was used in the sorting algorithms that provided the expected density contrasts between the ore and waste.

"As well, we are impressed that our earn-in partners American West are actively advancing the Storm and Seal projects on both the exploration and development fronts," Ullrich added.

The potential DSO product has excellent ESG outcomes with a small footprint, environmentally friendly processing, and simple, low-cost development, according to Aston Bay.

American West also reported that an extensive diamond drilling program was designed for 2022 with the aim of defining a maiden copper resource at Storm and defining new zones of mineralization through testing of high-priority electromagnetic anomalies.

The junior said the high-grade 2750N zone will be the first to be tested and will include infill drilling around historical intersections, such as 110 meters averaging 2.45% copper from surface in hole ST97-08 and 56 meters averaging 3.07% copper from a depth of 12.2 meters in hole ST99-19. These two intersections are located about 100 meters apart, and within a broader zone of mineralization over 300 meters in strike. The 2750N zone is open in all directions.

American West completed the EM surveys in 2021 using a time domain electromagnetic (TDEM) system. A total area of roughly 18 square kilometers (6.9 square miles) was completed for 945 stations, with a nominal station spacing of 100 meters at Storm Copper and 50 meters at Seal Zinc. Infills on some prospects at Storm were completed at 50-meter spacings.

American West also plans to test some high-priority EM anomalies identified as part of the 2021 survey, which identified seven shallow and seven deep anomalies that are untested and lie in favorable geological locations.

Two of the shallow EM anomalies close to the 2750N zone are associated with significant copper-in-soil geochemical anomalies and mapped surface gossans, making them compelling targets for the discovery of further copper sulfides.

The geometry and mostly gentle dips of the modeled deep conductors suggest that they may be related to stratiform-type targets and may be indicative of traditional sedimentary type copper mineralization at depth. One of these deep anomalies lies immediately to the west of the 4100N zone and is interpreted to project close to surface in that location, and therefore may represent the source of the shallow high-grade mineralization. 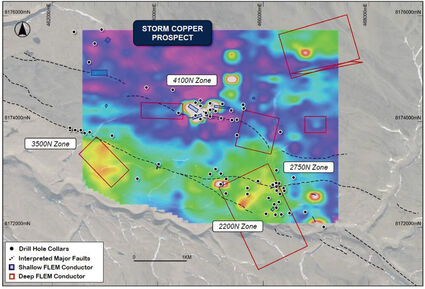 An electromagnetic survey has identified both shallow and deep conductors alongside faults and related to high-grade copper encountered in drilling and on the surface at Storm.

Drilling is expected to begin this month.

The results of three EM survey lines over the adjacent Seal deposit indicated that the known high-grade zinc-silver mineralization at Seal is not visible to the EM system used in the survey, and therefore no anomalies could be identified in the vicinity of the deposit.

While this work does not preclude other EM systems effectively being used to explore around Seal, the nearby Polaris zinc-lead deposit was discovered using gravity surveys, and this will continue to be the preferred geophysical tool for testing the extensive Seal stratigraphic horizon, according to American West.

Ground EM surveys planned for the 2022 season also will screen the Tornado and Blizzard areas. These areas lie east along strike from Storm and have existing copper-in-soil and gravity anomalies.