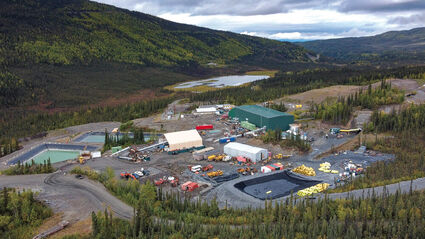 With the mill running at full capacity, the Keno Hill mine is forecast to produce more than 35.5 million oz of silver over eight years or nearly 4.5 million oz per year.

Alexco Resource Corp. has decided to pause operation of its 400-metric-ton-per-day mill in order to catch up with underground mine development at its Keno Hill silver project in the Yukon.

Based on these reserves, the Keno Hill mine is forecast to produce more than 35.5 million oz of silver over eight years of operation, or nearly 4.5 million oz per year.

Ramp-up of mining activities at Keno Hill has continued to progress from the May announcement, with sustained underground development benefitting from improved equipment availability at both the Flame & Moth and Bermingham mines.

Similarly, the district mill saw improved throughput and metallurgical performance in the same period. Additionally, underground advance at Bermingham reached the 1120 level, where the upper portion of the high-grade Bear zone has been cross-cut with two ore faces and predictive block model grades of 1,900 to 2,000 g/t silver.

While eager to improve from the difficulties brought on by the COVID-19 pandemic, and a strong focus on ramping-up production, it appears things have continued to be challenging for the Yukon miner.

"As previously indicated in May, our operations ramp-up plan is running well behind schedule," said Alexco Resource Corp. Chairman and CEO Clynton Nauman. "And at this juncture we have enough information to determine that the rate of improvement in underground performance is not sufficient to reach a sustainable 400 tbd and cash self-sufficiency in 2022."

While underground performance improvements have been notable, and the demonstrated supply of 150-250 tbd of ore to the mill is important, it is also apparent from results to date that underground development remains insufficient to achieve the necessary number of production headings to sustain 400 tbd feed to the mill before the end of 2022, the company said.

"We need to get further ahead with underground development, and that requires five to six months of focused underground advance to ensure we have available, and can maintain, two to three levels of development ahead of primary production levels in each mine," added Nauman.

To rectify this underproduction, Alexco has elected to temporarily suspend milling and focus all efforts on advancing underground development.

At the end of this half-year development focus period, the company expects to have approximately 120,000 metric tons of ore inventory averaging 1,050 g/t silver at the Bermingham and Flame & Moth targets available.

"This refocusing of operations is the right decision and it is unquestionably in the best interest of the mine and the company as a whole," finished Nauman. "The alternative of continuing to operate under the status quo with slowly improving ore deliveries to the mill for the balance of 2022, only serves to diminish the benefit of extremely high-grade ore, instead of using that benefit to generate free cash flow and hence returns for our shareholders early in 2023." 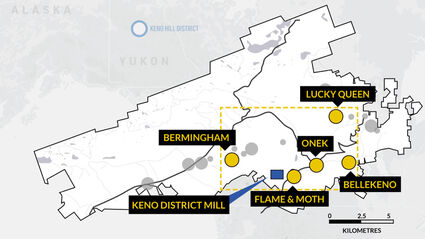 Alexco plans to resume ore extraction and milling operations in January 2023 and anticipates being cash self-sufficient within the first quarter. The company further estimates that more than four million ounces of silver will be delivered as ore feed to the district mill with its projected future production stockpile.

As for the exploration activities at Keno, surface exploration began with two drills in May with particular attention in the vicinity of the historic Silver King mine and the Coral Wigwam area, roughly 800 meters along the structural trend from Bermingham.

Early indications from shallow geology-defining drill holes in the Coral Wigwam area have identified a structural geology framework potentially similar to that which hosts the high-grade Bermingham silver deposit. The next phase of this work will focus on deeper drilling of the targeted structures within permissive stratigraphy, areas which proved highly productive in the adjacent Bermingham deposit.