Despite inflation, study outlines an economically robust mine North of 60 Mining News – July 15, 2022 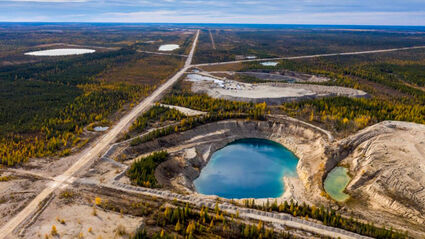 Osisko Metals' new proposed mine plan could make Pine Point a top-ten global zinc-lead producer with an annual average production of 329 million pounds of zinc and 141 million lb of lead over an initial 12-year mine life.

The objective of this updated PEA was to integrate updated long-term prices for zinc and lead, increased mined resources, cost escalations in capital and operating expenses, as well as reduced life-of-mine water management costs that resulted from the recently completely hydrogeological model.

The latter reduced the estimated dewatering volume by roughly 30% compared to the 2020 PEA, with the potential for a further reduction of 15% forecasted as the project advances to feasibility.

"In the current inflationary context I am very pleased that the PEA update still shows a very robust zinc project with viable economic metrics an after-tax IRR of 25% and after-tax NPV of C$602 million, as well as significantly increased resources," said Osisko Metals CEO Robert Wares. "The new proposed mine plan, with 18% increased tonnage to the mill, could again make Pine Point a top-ten global zinc-lead producer with an annual average production of 329 million pounds of zinc and 141 million lb of lead over a 12-year mine life."

The updated indicated and inferred categories represent an increase in tonnages by 22% and 26%, respectively.

The future feasibility study will include drilling from 2019 until the first half of the 2023 drill campaign.

"On a zinc only basis, Pine Point could potentially become a low-cost zinc-lead producer ranking fourth largest in the Americas," said Wares. "I remind shareholders that the exceptionally clean and high-grade zinc concentrate from Pine Point would be sought after by any number of smelters and traders globally."

Water has been a thorn in Osisko's side for quite a while now – concerns for pits and underground mines filling with water is something no miner wants to deal with.

Besides the obvious reasons of how difficult it would be to dig up something underwater, this added obstacle has been painstakingly approached with intensive hydrogeological testing.

Constant improvements have been made to reduce the costs of dewatering while maintaining a careful approach to its surroundings. For the recent PEA, Osisko added that a Site Wide Numerical Model has been used for Pine Point, a first for the company. This will provide insight into further dewatering requirements.

Furthermore, the company says current data suggests that there is potentially an additional reduction of up to 15% beyond the current simulation estimates.

The target is to further optimize the life-of-mine plan strategy to pump less water, use less energy, and continue to reduce dewatering costs. This also means reduced natural gas-generated power requirements and less greenhouse gas emissions for a smaller footprint.

The primary objective of the future feasibility study is to further optimize the numerical model and life of mine plan.

An increase in pre-production capital expenditure relative to the 2020 PEA was largely due to a 12% inflation factor, nominally natural gas, steel, and concrete.

Sustaining capital expenditure has also increased over the life of mine as the mine life was extended by two years.

Osisko also initiated the use of Deswik mining software in order to facilitate running various life of mine plans, to compare the benefits of using the cluster mining strategy – by grouping open pit mines in close proximity – to reduce dewatering volumes for the overall life of mine, and provide a more accurate operating cost compared to 2020's PEA.

"This summer we will be drill-testing the best gravity anomaly on the property that resulted from the 2018 gravimetric survey, now that this anomaly has been secured through additional staking," continued Wares. "It is our sincere hope that this anomaly represents an undiscovered prismatic deposit of high-grade massive zinc-lead sulphides. Furthermore, drilling will continue to upgrade the inferred mineral resources on the project and potentially yield further expansion of several known deposits."

The Pine Point project is expected to be a robust, profitable operation at a variety of prices and assumptions, according to Osisko. Metal prices used in the 2022 PEA update study are based on weighted two-year moving averages, hence $1.37/lb zinc and $0.96/lb lead. 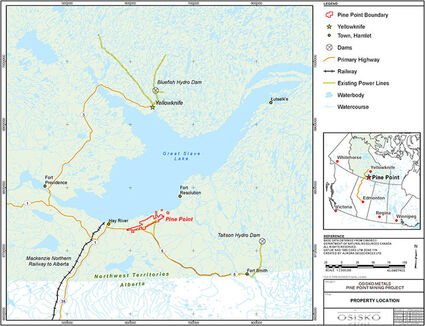 At these baseline inputs, the Pine Point mine outlined in the 2022 PEA would generate an after-tax net present value (8% discount) of C$602 million and an internal rate of return of 25%.

Under more bullish scenarios, considering record low zinc inventory levels and continued lack of investment in the mining industry, the project demonstrates even stronger economic returns and is well-positioned to benefit from a higher long-term zinc price. At US$1.50/lb zinc and $1.00/lb lead, the project would generate an after-tax NPV of C$787 million with an IRR of 29%.

A lower commodity pricing scenario was also modeled using US$1.30/lb zinc, $0.95/lb lead. Even at lower prices, Pine Point would still generate a robust NPV of C$526M and an IRR of 23% on an after-tax basis.

"We are still very bullish on zinc, especially after seeing an all-time high in spot prices this year, and we are committed to continue developing the Pine Point project as we launch the feasibility study this fall," finished Wares.