A 72-year mining opportunity at KSM

PEA outlines 39 years of block cave mining following the 33-year mine plan detailed in a PFS for surface mining at KSM North of 60 Mining News – August 5, 2022 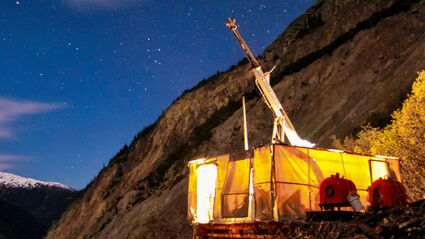 Following the 33 years of surface mining outlined in a recent prefeasibility study, the KSM project in British Columbia's Golden Triangle would still have enough resources to support an additional 39 years of underground mining, according to a new preliminary economic assessment prepared for Seabridge Gold Inc.

In early July, Seabridge published the results of a prefeasibility study for an open-pit mining operation at KSM that would produce an average of more than 1 million ounces of gold, 3 million oz of silver, 178 million pounds of copper and 4.2 million lb of molybdenum annually for 33 years.

This, however, only represents a small portion of the overall resources that have been outlined so far across the world-class KSM project.

The new PEA offers a first glance of an underground block cave mine that would extend mining on this district-scale property to the end of the 21st century.

"KSM is really an entire district hosting a nest of potentially economic porphyry deposits with different characteristics," said Seabridge Gold Chairman and CEO Rudi Fronk. "In our updated PFS we focused on the gold-rich deposits because of their faster payback and the relative simplicity of an open-pit only operation. However, we are very mindful that a deep deficit in mined copper is projected to be on the horizon as the world electrifies and moves towards a net zero carbon future. We therefore wanted to highlight KSM's potential to contribute to addressing this need more fully than the mine plan contained in our updated Preliminary Feasibility Study."

The 2022 PEA envisions an underground-focused mine plan that would start with the development of a block cave mine at Iron Cap that would be supplemented with a small open pit at Kerr. This would be followed up by block cave mining at Kerr for the final 20 years of mining.

Over the 39 years of mining considered in the PEA, 14.3 million oz of gold, 14.3 billion lb of copper, 68.2 million oz of silver, and 13.8 million lb of molybdenum would be produced from 1.7 billion metric tons of mill feed mined from these deposits.

Over the entire 39-year mine life, mill feed will be delivered to a flotation concentration mill circuit. The flotation plant will produce a gold-copper-silver concentrate and separate molybdenum concentrate for transport by truck to a port in the nearby town of Stewart, BC.

Initial capital cost for the mine detailed in the PEA is estimated at US$1.5 billion, with sustaining capital over the 39-year mine life estimated at US$12.8 billion, dominated by block cave development capital.

When you apply the credits for the gold, silver, and molybdenum produced, the total average cost to produce a pound of copper over the life of the mine is estimated to be US$1.44.

Under this scenario, it would take roughly 6.2 years to pay back the capital for developing the underground mine at KSM.

With none of the resources in the earlier Mitchell-East Mitchell PFS included in the underground mining-focused PEA, this mine plan represents a completely separate opportunity for continuous mining at KSM for at least 72 years. 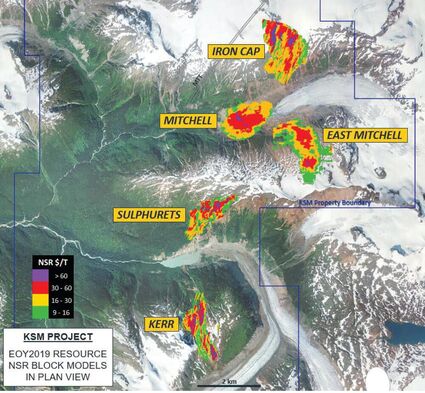 11 billion metric tons of measured, indicated, and inferred resources have been outlined so far in five deposits at KSM.

"We think this opportunity will be attractive to a prospective partner," said Fronk.