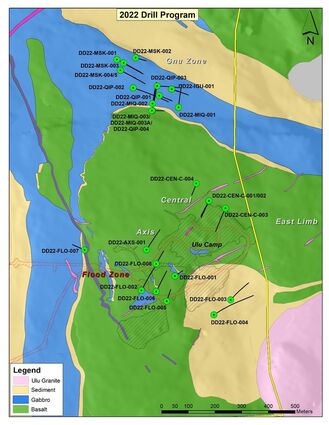 Blue Star Gold Corp. Oct. 25 reported moderate success from four holes drilled this year in the Central-C zone at Ulu, one of three gold exploration properties that cover more than a 45-kilometer (28 miles) stretch of the High Lake Greenstone Belt in Nunavut.

Blue Star recently completed a 3,865-meter drill program that included 28 holes focused on upgrading these deposits that lie about 600 meters apart, as well as testing the Central-C and Axis zones that lie between them.

Central-C was chosen for additional drilling this season due to its proximity to the Flood Zone, which hosts all the measured and indicated resources at Ulu, along with strong alteration and the down-dip continuity indicated by previous drilling.

Highlights from the four holes drilled at Central-C this year include:

Blue Star says its 2022 drilling indicates a potential change in orientation of the structure parallel to the Flood Zone that may be more favorable for future mine development.

In addition to drilling, Blue Star's 2022 exploration program included a 3,055-line-kilometer airborne magnetics geophysical survey over almost the entirety of its High Lake Greenstone Belt landholdings; a regional till sampling program at Roma, which lies about 32 kilometers (20 miles) north of the adjoining Ulu and Hood River properties; and prospecting of 58 of more than 100 mineral occurrences across the three properties.

The company said the prospecting has identified or confirmed several targets, including: 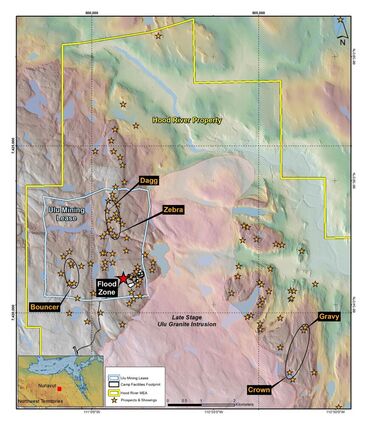 • Zebra-Dagg – a 900-meter-long corridor about 1,800 meters north of the Flood deposit that has only been tested with three short historical drill holes.

• Gravy – an 875-meter-long undrilled showing about 5,500 meters southeast of the Flood deposit that may link to the Crown trend, resulting in a 2,200-metre-long corridor.

• Bouncer – a roughly 700-meter-long undrilled structure about 1,700 meters west of the Flood deposit.

Assays are pending for roughly 50% of the samples from Blue Star's 2022 program along the High Lake Greenstone Belt, most of which are the rock and soil samples from the prospecting program.