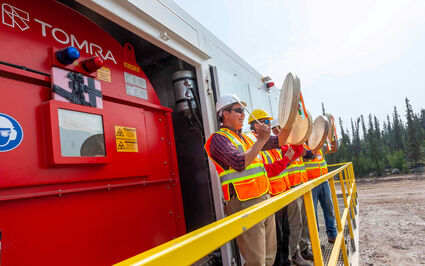 Drummers from the Yellowknives Dene First Nation perform during the 2021 opening ceremonies at the Nechalacho rare earths mine in Northwest Territories.

Honored for local hire and business opportunities at Canada's first rare earths mine.

Cheetah Resources Corp. Nov. 20 announced that it has been honored with the 2022 Northwest Territories Mining and Exploration (MAX) economic leadership award for its innovative Indigenous and northern employment and procurement at Nechalacho, as well as the rare earth mine's contribution to the mining and export sectors of the NWT economy.

As the Canadian subsidiary of Australia-based Vital Metals Ltd., Cheetah operates the Nechalacho Mine in NWT – the first rare earths-producing operation in Canada.

While the 2021 start of operations at Nechalacho opens a new chapter for NWT as a critical minerals producer in Canada's North, the award celebrates another major accomplishment by the rare earths miner – an outstanding record of Indigenous and local hiring and contracting.

Out of the 58 people trained and hired to work at Nechalacho during summer operations in 2021, 70% were Indigenous, and 85% were from Canada's North.

On top of this local hiring record, Cheetah got 90% of its goods and services from the North, with more than 160 NWT businesses supporting the Nechalacho mine's operations about 110 kilometers (68 miles) southeast of Yellowknife.

This includes the hiring of Nahanni Construction Ltd., which is majority owned by the Yellowknives Dene First Nation's Det'on Cho Corp., to carry out the mining at Nechalacho.

Further details on Cheetah's 2021 local hire and procurement initiatives can be read at Nechalacho invests sticky dollars in NWT in the August 6, 2021 edition of North of 60 Mining News.

In accepting the award, Cheetah Vice President of Strategy and Corporate Affairs David Connelly acknowledged the hard work and innovation of the Cheetah team in NWT.

"Thank you to our wonderful staff, and I also want to thank our five Indigenous partners," said Connelly. "A lot of you have helped earn this award, it belongs to everyone in this room and we're really proud and humbled."

At the MAX gala's charity auction in aid of Yellowknife's Adopt-a-Family support program, Cheetah partnered with NWT-based Ahmic Air to sponsor an exclusive tour of the Nechalacho Mine next summer. Under the skilled and entertaining encouragement of auctioneer Wally Schumann, Angela Bigg's winning bid of C$1,950 earned the tour, one of a dozen donations that raised C$53,100 for Adopt-a-Family.

NWT best of the best

The Nov. 17 MAX awards gala was the third year of this event co-sponsored by the NWT/Nunavut Chamber of Mines and the NWT Department of Industry, Tourism and Investment.

"The bar, on a normal day in the NWT's mining and exploration sector is set pretty high," Northwest Territories Minister of Industry, Tourism and Investment Caroline Wawzonek said at the opening of the gala. "On a day-to-day basis, we are witness to the excellence that exists in mining and exploration in our Territory. Tonight, we will recognize the best of the best."

In addition to Cheetah, these 2022 MAX award recognitions went to:

• Andy McMullen with BearWise received special recognition for passionate efforts that has enabled the minerals industry in NWT to successfully co-exist with and protect northern grizzly bears.

• Northwest Territories Geological Survey was honored with the distinguished service award for being honest brokers of geoscience information and dedication to educational activities. 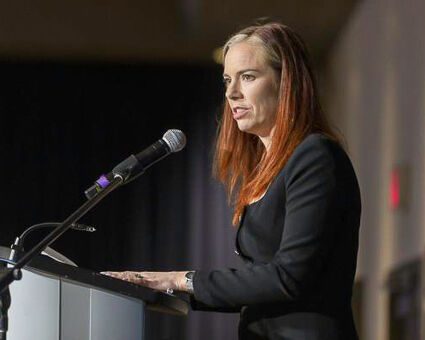 • Gaeleen MacPherson was the inaugural recipient of the MAX women in mining award for being a trailblazer for women, indigenous peoples, and northerners in the NWT mining industry.

• Diavik Diamond Mine received the environmental, social, and governance award for exemplary efforts in safety, environmental protection, and socioeconomic contributions in NWT.

• Diavik Diamond Mine also received the safety leadership award for taking a proactive role during the COVID-19 crisis that demonstrated mining could continue safely during the pandemic.

"The NWT is a resilient territory full of talented people and boundless potential; there is prosperity to be had here," Wawzonek said. "Together we can create a stronger, resource rich, sustainable North that benefits us all."