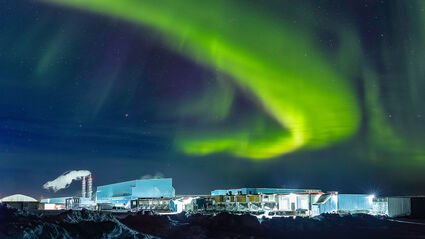 The aurora borealis above Meliadine, one of Agnico Eagle's three producing gold mines in Nunavut.

While a small group of dedicated explorers returned in 2022 to advance production and development projects in Nunavut, a growing number of newcomers fanned out across the northern territory in search of a variety of minerals.

Some came seeking gold deposits like those being explored and mined by Agnico Eagle Mines Ltd., while others chased historical occurrences of newly designated critical metals, especially copper and certain base metals, now in high demand for manufacturing electric vehicles, wind turbines and other green technologies.

Representing one‑fifth of Canada's land mass, Nunavut has tremendous resource potential and is a place of significant opportunity. In 2021 the effects of the COVID‑19 pandemic were still being felt by the mineral industry, but more proponents were able to move ahead with programs, following the Government of Nunavut's restrictions to prevent the spread of the virus in the territory.

In recognition of the challenges posed by the pandemic, Crown-Indigenous and Northern Affairs Canada, in 2021, once again offered relief of reporting requirements to prospecting permit and mineral claim holders under Nunavut's mining regulations.

A total of C$123.2 million was spent on mineral exploration and deposit appraisal in Nunavut during the year, according to statistics released by Natural Resources Canada.

That's down dramatically from the government's midyear projection of C$149.2 million, yet the outlay was higher than comparable expenditures in 2020 but compared poorly with the 10-year average in the territory of roughly C$186.3 million. NRCan's estimates are based on explorers' spending intentions.

Everywhere Agnico Eagle looked in Nunavut in 2022 – the most active mineral explorer in the territory – found gold.

The company also accelerated the pace of exploration and development at its two operating mines – Meliadine near Rankin Inlet and the Meadowbank Complex (including the Amaruq satellite deposit) in the heart of the Kivalliq region.

The miner carried out aggressive exploration programs at all three operations it owns outright, focusing on increasing reserves at Meliadine and Meadowbank with definition, infill, and exploratory drilling.

Agnico also undertook a US$56 million program in 2022 at Hope Bay, its newest gold mine project in Nunavut. The company is holding off on resuming operations at Hope Bay while it develops new exploration drifts and completes drilling at the Doris deposit; and conducts surface exploration drilling at the Madrid deposit and on regional targets along the 80-kilometer (50 miles) Hope Bay greenstone belt.

The explorer said the work at Hope Bay would continue through 2023 while it evaluates larger production scenarios for the project. Positive drill results in early 2022 also prompted Agnico to add another C$30 million later in the year to its 2022 exploration budget in Nunavut.

The exploration focused on three priority target areas, with the objective of identifying gold-bearing structures or veins at two targets and VMS-type mineralization at another target area. The drilling program comprised nine holes for about 1,815 meters.

Sabina Gold & Silver Corp., long committed to developing Back River, spent 2022 mainly focused on its proposed Goose Mine on this district-scale gold project in the Kitikmeot region of northwestern Nunavut. Following a formal construction decision in September, Sabina scheduled the start of gold production at Goose for the first quarter of 2025.

Sabina aims to build a 223,000-ounce-per-year surface and underground gold mining operation with a 3,000-metric-ton-per-day whole-ore leach process plant, with throughput increasing to 4,000 t/d in the second year.

"Preparations are now underway for construction of the winter ice road, which when complete will enable the transport of critical construction supplies and equipment to Goose early in the spring of 2023," Sabina President and CEO Bruce McLeod said in November.

Open pit mining at Goose would begin two years prior to mill commissioning to generate a stockpile of mill feed. The mill would operate for 15 years, producing doré bullion.

An estimated 18.7 million metric tons of ore will be mined at a mill head grade of 6.0 grams per metric ton and a projected gold recovery of 93.4%. A total of 3.35 million oz of gold is projected to be recovered over the life of the mine.

Underground development at Goose advanced in 2022 with about 1,200 meters complete with the first lateral access to the Umwelt zone and preparations for the first ventilation raise commencing.

The company also completed plant, camp, and laydown civil works with pre-stripping at the Echo pit well underway and first ore encountered, and drew US$31.25 million on a US$125 million gold stream facility with Wheaton Precious Metals, the proceeds of which will be used to continue development and construction of the Goose Mine.

Sabina also opened a camp in 2022 near its George deposit for the first time in a decade and completed a field program in preparation for exploration drilling at George in spring 2023.

Blue Star completed approximately 3,865 meters of drilling in 28 holes, 3,055 line-kilometers of airborne magnetics surveying, and a regional till sampling program on the Roma Project. This followed the completion of 5,012 meters of drilling in 25 holes in 2021 that covered 11 targets and led to the discovery of a new vein gold system northeast of the Flood Zone.

The latest targets include three priority ones – Bouncer, Zebra-Dagg, and Gravy.

Blue Star also reviewed, prospected, and mapped 58 of the more than 100 showings in a target pipeline it is developing to rapidly evaluate and prioritize targets for future drill testing.

The site of the future deep-water port at Gray's Bay is 40-100 kilometers (25-62 miles) to the north of Blue Star's properties, and the proposed route corridor for the all-weather Gray's Bay Road passes near the Roma, Ulu, and Hood River projects.

North Arrow Minerals Inc. reported results of processing a 2,000-metric ton bulk sample extracted in 2021 from its Naujaat diamond project on the Melville Peninsula is about halfway complete.

Viewed as a world-class diamond project, Naujaat is nine kilometers (5.5 miles) northeast of the hamlet of Naujaat on Nunavut's Melville Peninsula. The property covers 10,742 hectares (26,540 acres) of contiguous mineral leases and claims held by North Arrow.

Fifteen kimberlites and eight kimberlite pipes have been identified on the property, including the Q1-4 kimberlite, the largest and most diamondiferous, and associated kimberlite dykes.

The current resource estimate for the Naujaat project totals 48 million metric tons of material to a depth of 205 meters, containing more than 26 million carats of diamonds.

A specific and rare color, the yellow diamonds at Naujaat have been certified by the Gemological Institute of America and are expected to sell at high premiums to white diamond prices.

Ongoing exploration at iron mine

At the Mary River mine on Baffin Island, Baffinland Iron Mines Ltd. spent C$8.7 million to complete a 6,024-meter helicopter-supported infill and exploration drill program in 2021 that focused on Baffinland's mining leases. All holes intersected high-grade iron, and the company included the drill results in a revised mineral resource estimate.

Infill drilling totaling 5,460 meters in 19 holes was carried out on Deposits 1 and 3, and more than 1,000 core samples were taken. A further 564 meters of drilling in two holes were completed as part of an ongoing geotechnical investigation.

In 2022 exploration, Baffinland drilled 1,595 meters in four holes on the North Limb of Deposit 1 to define the northern extent of the mineralized zone and allow for an upgrade of Mary River's resources. Nunavut workers, sent home due to the pandemic, began returning to the mine site in March.

Drilling of up to 1,074 meters in four holes also focused across the Axial Zone to continue characterization of ore types and the down dip extension of the ore zones.

The miner completed up to 3,425 meters in 11 holes of geotechnical drilling in support of a pit slope design study and 6,230 meters in 22 holes of infill drilling across the western portion of Deposit 1 to upgrade inferred resources to the indicated category and deep holes at the west end to test the down-dip extension of the ore zone.

Baffinland also conducted a regional exploration program to develop and maintain value in high-grade iron ore prospects across the Mary River district. This included prospecting, possible channel sampling across the Magnetite Hill claim block in follow-up to a 2021 airborne geophysical survey and completing a ground gravity survey across the Turner River prospect.

The company is seeking permit amendments to double allowed annual ore extraction and transportation at Mary River from the current six million metric tons to 12Mt from the mine to Milne Inlet and the construction of a railway linking the mine site to the port.

To accommodate this proposed increased shipping from the Milne Inlet port, infrastructure at the mine would need to be redesigned and upgraded. In 2021, the Mary River mine produced 5.61Mt of iron ore shipped in 73 loads from Milne Inlet, up slightly from its output of 5.45Mt shipped in 2020.

In November, Baffinland reported that Northern Affairs Minister Dan Vandal determined that the expansion should not proceed at this time.

"Baffinland's Phase 2 expansion plan would have created long-term stability for our business, for the local communities on Baffin Island and for the territory of Nunavut, while lowering the marine and terrestrial effects of our current operations (not increasing them) and increasing the number of jobs from the current level," said Baffinland Iron Mines CEO Brian Penney. "Given the clear benefits to Inuit, Nunavut and Canada as a whole, and the fact that Baffinland high-grade ore is also the greenest path to steel production, the Minister's decision is both surprising and disappointing."

Though Nunavut hosts 1,113 known copper mineral occurrences, the territory is largely underexplored and undeveloped for this metal critical to the green energy transition, geologists say.

Of the 521 recorded showings averaging more than 0.2% (2,000 parts per million) copper, 50 occurrences have averaged more than 10% copper, according to the Nunavut Mineral Occurrence Database. The database contains more than 2,700 mineral showings, exploration assessment reports and other government reports and publications.

American West Metals Ltd. is one explorer that recognized the territory's prospectivity for copper and acted on that realization. Taking an 80% earn-in option on the Storm Copper project from Aston Bay Holdings Ltd., the Australia-based company completed a second year of exploration at the project in 2022. The project encompasses both the Storm copper and Seal zinc properties. The exploration focused mainly on the Storm property.

Dave O'Neill, managing director of American West Metals, reported results of a maiden drill program in 2022 at Storm in which the company intersected "extremely" high-grade copper near-surface, likely doubling the volume of mineralization at the project's 2750N Zone and discovered a potential large, new sedimentary copper system below the near-surface mineralization.

"The next drill program at Storm will look to define further resources at the 2750N Zone, and to evaluate the economic potential of other highly prospective near-surface occurrences of high-grade copper such as the 2200N and 4100N zones," O'Neill said.

Another explorer, StrategX Elements Corp., is actively exploring three properties on the Melville Peninsula. Having identified 12 high-priority targets from a high-resolution geophysical dataset, StrategX planned to conduct a first-phase, 2,000-meter diamond drill program on the Nagvaak project in 2022. 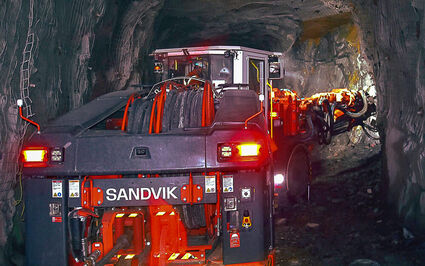 Sabina has completed significant predevelopment activities at Goose, including the advancement of an underground ramp to the first ore access sublevel at the gold mine in Nunavut.

With about 95,000 hectares (234,750 acres) of claims and permits encompassing not only Nagvaak but also the cobalt-nickel-copper Mel project and the nickel, copper, cobalt, and PGE Tasijuaq project, StrategX said it has a distinct competitive advantage as a first mover in the underexplored region.

The company acquired 13 mineral claims in 2021, seven of which are adjacent to the Mel project owned by North Arrow Minerals Inc.

StrategX signed an agreement with North Arrow that gives StrategX non‑diamond mineral rights within North Arrow's 56,000-hectare property, as well as a royalty on diamond production.