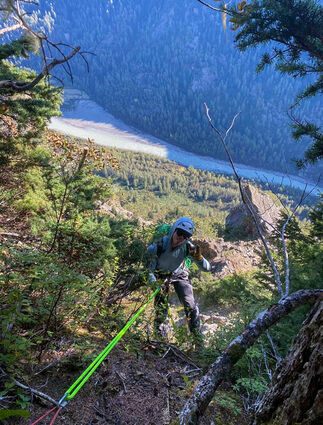 Many locations at Cantoo required experienced climbers to conduct Blackwolf's sampling on the outcropping veins.

Blackwolf Copper and Gold Ltd. Jan. 17 announced it has received its surface sample assay results from the company's 2022 reconnaissance exploration program at its various Hyder area properties, a region that resides on the Alaska side of the famed Golden Triangle.

Initially exploring its flagship historic Niblack copper-gold-silver-zinc project located on the southern end of Prince of Wales Island in Southeast Alaska, Blackwolf expanded its holdings by staking and optioning several new properties near Hyder, Alaska, just across the border from Stewart, British Columbia.

Over the past two years, Blackwolf has expanded its portfolio with five projects near Hyder – Casey, Cantoo, Texas Creek, Mineral Hill, and Rooster – that host several highly prospective gold-silver targets with very limited modern exploration and virtually none in the last 25 years.

Of those samples, the results returned came from Cantoo and the Doghole and Solo targets from Texas Creek. Highlights include:

• Cantoo – individual assays up to 37.6 g/t gold from chip samples of outcropping veins up to 30 meters wide. A series of these stacked, shallow southwesterly-dipping veins and stockwork zones were identified at Cantoo, spanning over 300 meters of exposed elevation and over 500 meters along strike. The company holds an authorized permit for Cantoo, which is a high-priority target for the 2023 season.

• Solo – grab samples grading 20.6 g/t gold and 386 g/t silver, as well as 6 g/t gold and 3,836 g/t silver from a zone of structurally-controlled quartz veining, sulfide mineralization, and alteration over 535 meters of strike length. Blackwolf's sampling results, coupled with the historic discovery of ultra-high-grade veins, are geologically similar to those from Newcrest Mining's Brucejack deposit in Northern BC. 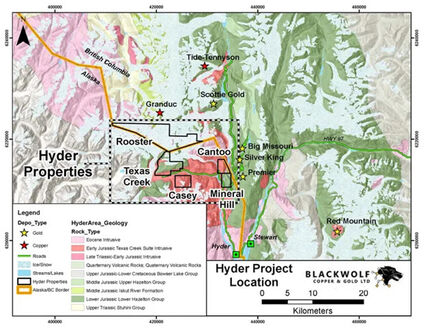 "The 2022 program on the Hyder area properties was very encouraging; stacked, wide, high-grade veins located adjacent to one of the most important gold-silver deposits in the Golden Triangle, represent the best drill target that I've seen in the area and we look forward to drilling the initial holes at Cantoo in the spring of 2023," said Blackwolf Copper and Gold President and CEO Rob McLeod. "Additionally, the gold and silver-rich veins and alteration zones sampled from the Doghole and Solo prospects represent excellent, undrilled targets as well."

Due to the steep, challenging climbing conditions at Cantoo, only limited surface sampling was completed on the outcropping veins. Assay results for all samples collected during 2022 on the Hyder properties ranged from trace to 37.6 g/t gold, trace to 3,836 g/t silver, trace to 1.47% copper, trace to 21.3% zinc, and trace to 58.4% lead.

34 of the samples returned at least over 1 g/t gold.

With permitting approved in late September, Blackwolf initially thought it could begin drilling in October; however, the first drills should be turning at this "best drill target" when the melt begins.