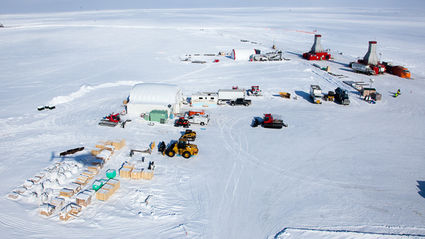 With Canada's newest diamond mine looming on the horizon in Northwest Territories, crews at the Kennady North project about seven kilometers (4.5 miles) to the southwest, do not have far to look for inspiration.

It is not serendipitous that Gahcho Kué – a mine being ramped up to commercial production by De Beers Canada (51 percent) and Mountain Province Diamonds Inc. (49 percent) – and Kennady North are within eyesight of each other. In fact, Kennady Diamonds Inc. was spun out of Mountain Province in 2012 for the sole purpose of identifying and delineating a next-generation diamond mine at Kennady North.

Over the ensuing four years, Kennady Diamonds has taken long strides in achieving its lofty goal.

This work includes identification of four kimberlites along a 3,000-meter-long corridor at Kennady North that is on trend and northeast of Gahcho Kué. Kelvin, the most advanced of these diamond-rich kimberlites, is now at a stage where feasibility of developing a mine can be considered.

"Following the recent closing of a C$48 million non-brokered private placement, Kennady Diamonds is fully funded to the end of 2017 when we expect to be in a position to make a decision to build the first mine at Kelvin," Patrick Evans said at the end of 2015.

Going into 2016, Evans was serving as president and CEO of both Kennady and Mountain Province.

"At a time when most believed that the Kennady North project had few prospects, Patrick assembled a team to resume exploration at Kennady, which has resulted in the discovery of four kimberlite pipes within the Kelvin-Faraday corridor," Kennady Diamonds Chairman Jonathan Comerford reflected.

Given this success, Kennady North's leadership decided it was time to loosen its ties to the parent company, appointing two independent directors and bringing on Rory Moore, an executive with three decades of diamond experience not tied to Mountain Province or Kennady, as president and CEO.

Kennady has its sights set on identifying roughly 15 million metric tons of resource along the Kelvin-Faraday corridor with grades of at least 2 carats per ton.

A 433-metric-ton bulk sample collected from the southeast lobe of the Kelvin kimberlite early in 2015 provided evidence that such a goal is within reach. This sample returned 893 carats of commercial size diamonds, or about 2.02 carats per metric ton. Of these, 35 were larger than one carat, including a 4.42 carat stone valued at $1,603 per carat.

While meeting Kennady's hoped-for minimum in terms of grade, evidence suggests that the shallow end of the southeast lobe where the sample was collected is lower grade than the overall kimberlite average.

To gain a better understanding of the overall grade, Kennady North collected a 612-metric-ton bulk sample from Kelvin during a 2016 winter drill program that ran from January through April.

Primarily sourced from the north lobe of the Kelvin kimberlite, this sample returned 1,278 carats of commercial-sized, or 2.09 c/t. Of these, 44 were larger than one carat, including a 3.43 carat white/colorless transparent octahedral twin with no inclusions.

"One of the key observations to emerge from our Kelvin bulk sampling programs is the remarkable consistency in overall diamond grade across the full extent of the body, despite the geological complexity within the body. This is a positive attribute from both an evaluation and a mining perspective," said Moore.

In addition to providing the information needed for a resource estimate, this bulk sample will push the total parcel of diamonds collected from Kelvin to 2,171 carats, enough for accurate revenue modeling of the kimberlite.

With this information, JDS Energy and Mining can put the finishing touches on a preliminary economic assessment for Kelvin, expected to be finished by the end of 2016.

While collecting the information needed to begin considering developing Kelvin, excitement is building for three kimberlites discovered below Faraday Lake, about 2,500 meters to the northeast.

The 10,712 meters of drilling completed in the Faraday area during the winter program focused on Faraday 1 and 3, apparently adjacent kimberlite pipes that may have a deeper connection.

"The newly discovered Faraday 3 body continues to grow in size with each drill hole, and it appears that Faraday 1 and Faraday 3 may be joined at depth as they approach the shore line of Faraday Lake," Moore said, shortly after taking over in May.

Tracing Faraday 1 and 3 towards the lakeshore during the winter program has allowed drilling to continue to trace these diamond bearing pipes from land when drilling resumed in the summer.

"The focus of our summer program is to define the extension of the Faraday bodies to the northwest as they extend from beneath Faraday Lake toward the shore," Moore explained. "We established in the last few drill holes of the winter drilling program that the Faraday 1 and 3 kimberlites merge at depth, and we are excited to determine whether the Faraday bodies have north-limb extensions similar to that defined at Kelvin. The systematic drilling planned for the summer will ultimately determine the size and shape of these bodies."

While one rig focused on the Faraday 1-3 complex, a second rig drilling during the summer targeted Faraday 2.

With roughly 8,000 meters of drilling completed at Faraday this summer and a bulk sample of these kimberlites planned for 2017, more mines could be coming into view along the northeastern horizon of the Kelvin-Faraday corridor.