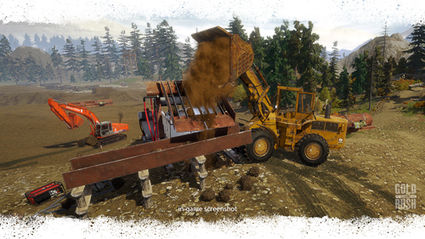 Year-round placer gold mining in Alaska will be possible starting this winter, at least virtually, if a Poland-based video game developer gets "Gold Rush: The Game" finished on schedule.

Based on the wildly popular Discovery Channel show, "Gold Rush," this placer gold mining simulator is set in Alaska and includes four unique gold claim areas based around unique Alaskan inspired stories. The game features realistic looking machinery such as excavators, loaders, dozers and trommel recovery plants to recover the gold that is hopefully lying beneath the surface of their claims.

With Gold Rush, the developers are taking their expertise a step further by immersing players into the business of placer gold mining in Alaska.

"Despite millions of people worldwide who are crazy about mining gold, there were no games that would let you get your hands dirty," said Przemysław Bartkowiak, co-founder, Code Horizon.

Aspiring gold miners start off with a small grubstake and must use the gold they recover to purchase bigger and better heavy equipment, recovery plants and mining claims.

"With every ounce of gold collected you will be one step closer to the ultimate goal – becoming the wealthiest gold miner in Alaska," said Bartkowiak.

While Gold Rush miners may be able to experience Alaska gold mining from the comfort of their living rooms, they will be exposed to virtual hardships of placer mining.

On the quest to becoming the wealthiest virtual gold miner in Alaska, players will experience equipment breakdowns and will be challenged by shifting seasons, including battling snow and ice to get that last ounce of aurum for the season.

With completely deformable terrain, players will also have to overcome the challenges of moving paydirt out of an ever deepening pit.

Code Horizon has already developed a personal computer version of the game that includes all of the basic features and is now working on a bigger version that includes a dump truck, drilling equipment to test your property and a new wash plant.

The company also hopes to convert the PC game to versions playable on Xbox and PlayStation consoles, and include a virtual reality mode tent where Gold Rush miners can get an even more realistic experience while panning their concentrates and pouring their gold into bars.

Code Horizon has launched a Kickstarter campaign to fund the development of the game they would ultimately like to present to virtual gold miners.

The company is looking for input from placer miners and equipment manufacturers for ideas and specifications of other add-ons it could release in the future.

The developer plans to release the PC and console version of the game by the time winter weather shuts down real placer gold mining in Alaska (this fall) and will deliver additional mining claims, more equipment and VR tent mode as free updates when they become available.