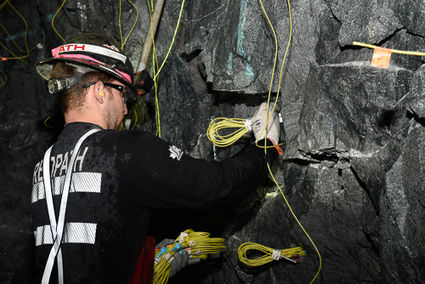 A J.S. Redpath Corp. crewmember prepares for a blast as the company drives a decline to the high-grade Jualin gold deposit at Coeur Mining's Kensington Mine in Southeast Alaska.

With high-grade ore being hauled to the surface from the Jualin deposit, Coeur Mining Inc.'s Kensington Mine in Southeast Alaska is poised to churn out more gold at lower costs moving forward.

Through the first nine months of this year, this underground mine about 45 miles north of Juneau produced 80,162 ounces of gold.

Going into 2017, Coeur planned for Kensington to produce at least 120,000 oz of gold this year. The Chicago-based miner, however, had hoped to be closer to this goal by the end of the third quarter. Undaunted by the slower than planned start, the company is sprinting for at least 40,000 oz of gold during the final 122 days of 2017.

"Kensington results during the first nine months now puts a lot of pressure on the team during the fourth quarter to deliver on the full year production guidance of 120,000 to 125,000 oz of gold," said Coeur Mining President and CEO Mitchell Krebs.

Mining ore from the high-grade Jualin deposit has been a cornerstone for increased production at Kensington since Coeur reconfigured its plan for the mine in 2015.

The Kensington property hosts two historical mines that date back to the dawn of the 20th Century – Jualin and Kensington.

Jualin operated for roughly 30 years beginning in 1896 and Kensington produced gold for about four decades, starting in 1897. Together, these bygone mines churned out some 40,500 oz of gold from 75,200 tons of ore, for an average recovery grade of around 0.54 oz/t.

Since Coeur resumed operations, it has mined ore from the Kensington area. Going into 2017 this area hosted 497,000 oz gold in 2.62 million metric tons of reserves averaging 0.19 oz/t.

A 2015 resource calculation, the most recent one published for Jualin, has the neighboring mine hosting 289,000 tons of inferred resource averaging 0.62 oz/t (179,000 oz) gold, more than triple the grades mined at Kensington so far this year.

Coeur began digging towards Jualin in mid-2015 and began hauling out the higher grade ore there in the third quarter of this year.

"We mined development ore from the new Jualin deposit earlier than planned and expect to start processing this higher grade material in the fourth quarter, which is a major accomplishment," said Krebs.

This ore, coupled with high-grade ore from the Raven deposit in the Kensington Mine, is expected to push fourth quarter gold production high enough to reach the lower end of Coeur's production guidance for 2017.

Krebs said Coeur anticipates that "mining from the high-grade Raven and Jualin zones to lead to significantly higher grades and production levels and lower unit costs to finish the year."

The Coeur CEO told analysts on Oct. 26 that the final push for 2017 "leans heavily on ore coming out of Raven."

"They'll be dropping stopes to allow us to process some very high grade ore out of Raven that will supplement what we mine from Kensington Main to give us that great kick that we'll need to achieve that kind of a production quarter," he added.

With higher grade ore becoming the norm, it is expected that Kensington's gold production will be in the 150,000 oz range for 2018.

A technical report due to be published early in 2018 will provide a better idea of how much high-grade gold bearing ore has been identified at Jualin and how this will translate into Kensington gold production in the coming years.

A lot of drilling

In the meantime, Kensington continues to draw a large portion of Coeur's exploration dollars.

Through the first nine months of 2017 the company invested roughly US$6 million to drill some 33,400 meters at the high-grade gold mine.

"The results we are seeing justify these higher spending levels," Krebs explained.

The Coeur CEO said there are five rigs turning at Kensington – two rigs targeting Jualin from the surface, another two focused on Jualin resource expansion from underground, and one expanding the high-grade Raven deposit in the Kensington Mine.

"As a result we are generating a lot of drill core during the second half of this year, which is the main reason we're targeting an updated technical report for the end of the first quarter of 2018, so we can incorporate as much of this new information as possible into an updated reserve and resource," he said.

This technical report seems likely to mark the start of a new phase for Kensington – a period that could be known for higher grade ore resulting in more gold for less cost.

If Coeur's strategy of investing more money in operations where it is having the most exploration success is any indication, then this new era could last awhile.

"There's still a lot of drilling to be done at Kensington which has suffered from a lack of exploration funding over the years," Krebs said.