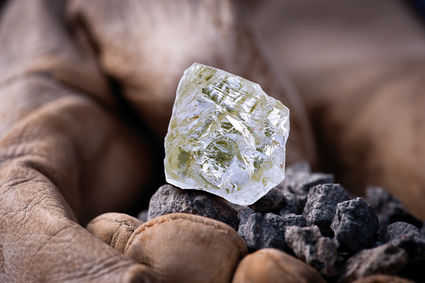 Northwest Territory has become renowned for its quality diamonds, including this 187.7-carat gem known as Foxfire, the largest diamond recovered from the Diavik Mine.

With the opening of Gahcho Kué, Northwest Territories is reaping the rewards of past exploration spending across the vast diamond-rich expanse of northern Canada.

In fact, the new diamond mine is expected to contribute some C$5.7 billion to Northwest Territories economy by 2028, the end of its currently projected life, according to a report commissioned by De Beers Group of Companies.

"Without that first pipe of kimberlite, there is no mine; and without dedicated explorers there is no discovery," Schumann said during the Gahcho Kué ribbon-cutting ceremony.

This understanding of the importance of mineral exploration is reflected in the funding Northwest Territories provides to prospectors and mining explorers under its Mining Incentive Program.

For 2017, Northwest Territories increased the program to C$1 million, more than double the C$400,000 in exploration incentives previously offered.

Dominion Diamond Corp. stepped up its exploration in Northwest Territories' diamond-rich Lac de Gras region with a US$9 million budget for exploration drilling on the Ekati Mine property and kimberlite expansion drilling at the Diavik Mine.

"As an established operator, one of our primary objectives is to leverage our infrastructure advantage in one of the world's most prospective diamond mining districts," Gowans added.

Going into 2017, Ekati had 105.4 million carats of diamonds in probable reserves, enough to keep the mine in operation into 2033.

These reserves are found in six kimberlites. The wider Ekati property, however, has 150 known kimberlite bodies, 110 of which have little or no exploration.

This year's exploration program includes prioritizing the kimberlite pipes on the Ekati property and drilling on up to six of Ekati's most promising targets.

Dominion said it is planning for a potential bulk sampling program in fiscal 2019.

Any future program, however, will be up to Washington Companies, a private business owned by billionaire Dennis Washington that is finalizing the purchase of Dominion Diamond for US$1.2 billion.

Given that greensfield exploration is listed among Washington Company's priorities for its new diamond acquisition in Northwest Territories, Dominion's current investigations will likely continue.

"Dominion Diamond has an excellent collection of mining assets and a talented and experienced management team and workforce," said Washington President Lawrence Simkins. "We are excited to work with their team to extend the mine life of the Ekati mine and continue partnering with Rio Tinto in the operation of the Diavik mine, while maintaining long-term employment for Dominion employees."

With shareholder and court approvals, the closing of Washington Group's purchase of Dominion is expected in November.

Partners in Gahcho Kué – De Beers (51 percent) and Mountain Province Diamonds Inc. (49 percent) – are focused on operations at the new mine and did not report any exploration activities for 2017.

Gahcho Kué is on pace to produce more than 5 million carats of diamonds in 2017.

As Gahcho Kué mines the glimmering rewards of years of exploration and development, other companies are seeking the next generation of diamond mines in Northwest Territories.

The nearest to Gahcho Kué, both in terms of proximity and development, is Kennady Diamonds Inc.'s Kennady North project.

Since being spun out of Mountain Province in 2012, Kennady has identified a series of diamond-rich kimberlites along a corridor that trends northeast from the Gahcho Kué property 3,000 meters onto the Kennady North property.

At the close of 2016, Kennady reported a maiden resource estimate for Kelvin, the most advanced kimberlite on the property. According to this inaugural calculation, the Kelvin kimberlite contains 8.5 million metric tons of indicated resources averaging 1.6 carats per metric ton (13.62 million carats) diamonds.

The Faraday kimberlites, about 2,000 meters northeast of Kelvin, are in an earlier stage of exploration but are showing much higher diamond grades.

A 262.6-metric-ton sample collected from the Faraday 2 kimberlite returned 737.6 carats of commercial sized diamonds for an average grade of 2.81 c/t.

A 276.4-metric-ton sample collected from Faraday 3 returned 460.5 carats of commercial sized diamonds for an average grade of 1.67 c/t.

A 7.78 carat white octahedral with no inclusions, the largest found so far at Kennady North, was among the high-quality diamonds in the Faraday 3 sample.

"While the grade achieved for the Faraday 3 kimberlite is in line with expectations, the recovery of a high quality 7.78 carat gem from the sample is extremely exciting. This stone represents the largest diamond recovered from our bulk sampling activities on the project to date," Kennady Diamonds President and CEO Rory Moore. "As with Faraday 2, the size distribution and quality characteristics of the Faraday 3 diamonds appear better than those recovered from Kelvin to date, with a notable trend of increased quality with diamond size and a higher incidence of well-formed crystals in the larger size fractions."

Kennady North also reported the recovery of 76.8 carats of commercial size diamonds from a 26.37-metric-ton sample collected from the Faraday 1 kimberlite, for a sample grade of 2.91 carats per metric ton.

North Arrow Minerals Inc. continues its search for the next generation of diamond mines near Ekati and Diavik.

Lac de Gras, a joint venture project owned 55 percent by Dominion and 45 percent by North Arrow, was the target of C$2.8 million of exploration managed by Dominion.

The 2017 program included ground and airborne geophysical surveys and exploration drilling. The results from this work are being evaluated for potential drilling.

Sampling at Loki, which is southwest of Diavik and adjacent to the Las de Gras property, in 2016 turned up some promising targets.

North Arrow carried out ground geophysical surveys at Loki in 2017 with the hopes of turning up targets for drilling late in the year.

While diamonds continue to be the main gem of mineral exploration in Northwest Territories, gold is taking a much larger share there in 2017, thanks to big programs being carried out by Nighthawk Gold Corp. and TerraX Minerals Inc.

"2017 will be our most active and extensive exploration program to-date," said Nighthawk President and CEO Michael Byron.

In fact, the 2017 program will roughly double the meters Nighthawk has drilled at Indin Lake since its first program there in 2012.

This drilling will be used to update a 2.1-million-oz – 39.8 million metric tons averaging 1.64 grams per metric ton – inferred resource calculated for Indin Lake in 2013.

"The fact that it can now be accurately tracked and expanded, and that it maintains its higher-grade character, are both important features that will positively impact our upcoming resource estimate," said Byron, about halfway through the 2017 program.

TerraX Minerals, meanwhile, is exploring its own district-scale gold project on the outskirts of Yellowknife that covers the same geological trend as Yellowknife's iconic Con and Giant mines, which produced a combined 14.2 million ounces of gold.

Northbelt, the most advanced of the three YCGP properties, continued as the primary exploration focus in 2017.

So far, more than 87,500 meters in 440 holes have been drilled at Northbelt, including more than 50,000 meters drilled by TerraX. This work has identified six high-grade and bulk tonnage gold targets along a six-kilometer- (3.7 miles) stretch of the property.

TerraX also began drilling Southbelt, where high-grade gold mineralization extends from the Con Mine south for five kilometers (three miles) onto the property.

In February, TerraX announced the staking of Eastbelt, which extends for 40 kilometers (25 miles) along the east side of both the Northbelt and Southbelt properties.

"Since the beginning of the Yellowknife City Gold project we have pursued a goal of assembling and controlling a major Canadian gold district. The acquisition of this highly prospective new ground completes that goal, said TerraX Chairman and CEO Joseph Campbell.

Sampling of Angel, one of the high-grade zones on TerraX's newly acquired property, returned samples with up to 4,190 g/t silver and 65.7 g/t gold.

GoldMining issued 4 million shares to the receiver handling the bankruptcy of Tyhee Gold to acquire the properties.

The Yellowknife Gold project hosts 27.1 million metric tons of measured and indicated resource averaging 1.97 (1.71 million oz) gold, according to a calculation prepared for Tyhee in 2012.

"An independent updated resource estimate for the YGP has been commissioned, and the company is currently reviewing the extensive geological database to evaluate follow-up exploration targets," said GoldMining CEO Garnet Dawson.

While not as glimmering as diamonds and gold, zinc is a more basic commodity that played an important role in Northwest Territories' mining history and is set to help galvanize its mining future.

Canadian Zinc Corp.'s Prairie Creek zinc-lead-silver project, which is on pace to begin production as early as 2020, could be the first of a new generation of zinc mines in the territory.

Located in the Mackenzie Mountains of southwestern Northwest Territories, Prairie Creek has incrementally worked its way to production since the 1960s.

Canadian Zinc, which optioned the property in 1991, has completed more than 78,000 meters of surface drilling and underground exploration programs.

"Canadian Zinc has to date invested almost C$85 million in the exploration, development, environmental assessment and permitting of the Prairie Creek Mine and has significantly improved and de-risked the project," said Canadian Zinc Chairman and CEO John Kearney.

A feasibility study completed in September details a 1,600-metric-tons-per-day operation at Prairie Creek that is expected to average roughly 95 million pounds of zinc, 105 million lbs. of lead and 2.1 million oz of silver annually during the first 10 years.

The feasibility study was based on 8.1 million metric tons of proven and probable reserves averaging 8.64 percent zinc, 8.1 percent lead and 124 g/t silver.

"With the recent recommendation from the Mackenzie Valley Environmental Impact Review Board for approval of the all-season road, and with this robust feasibility study in hand, Canadian Zinc will now concentrate efforts on financing for the development and construction of the Prairie Creek Mine," Kearney added.

From 1964 until 1987, Cominco produced and estimated 2 billion lbs of zinc and lead from 64 million metric tons of ore mine from 52 deposits at Pine Point.

A combination of low metals prices and increased costs prompted the miner to shutter operations.

Pine Point is now picking up where Cominco left off.

Pine Point plans to incorporate the results from its 2017 program into feasibility level studies that include some of the additional deposits tested and considers a larger mill than envisioned in the PEA.

"Historically, the 50 open pit deposits mined out by Cominco were in the range of 10 percent combined lead and zinc," said Darnley Bay President and CEO Jamie Levy. "Our goal with the 2017 program is to find more of these high-grade deposit,s which would significantly improve the already robust economics at Pine Point."

The lithium potential of pegmatites within the Yellowknife area, including Hidden Lake, was first recognized in the mid-1950s.

92 Resources Corp. is investigating the potential of the hardrock lithium source of this mineral that is becoming increasingly popular due to its use in the growing lithium-ion battery sector.

While most of the current lithium supply comes from brines, 92 Resources said spodumene-bearing pegmatites continue to be an important supply of lithium.

And the pegmatites at Hidden Lake are rich in lithium.

Significant grades of tantalum, a technology metal used in capacitors and high power resistors, were associated with the lithium mineralization.

This work, which was partial funded by a C$140,000 Mining Incentive Program grant, is being used to identify targets for drilling.

David Ramsay, who recently served as Northwest Territories Minister of Industry, Tourism and Investment, joined the 92 Resources board in August.

92 Resources and the future of the Hidden Lake project is expected to be bolstered by Ramsay's business acumen, two decades of public service in Northwest Territories and dedication to responsible resource development in the territory.

"The Northwest Territories has some of the best mining potential anywhere in the world and a political climate that is welcoming to exploration and investment," said Ramsay