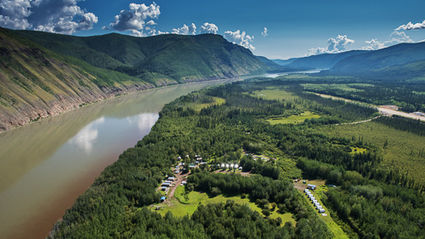 Goldcorp's Coffee Gold camp lies along the Yukon River in the heart of the White Gold District.

Following up on the discoveries made during a C$1 billion exploration explosion in the Yukon from 2007 until 2013, five of the world's largest gold producers are leading a second wave of the 21st Century Yukon Gold Rush.

Kinross Gold Corp., which operates the Fort Knox Mine in neighboring Alaska, was the first of the majors to grab a foothold in the Yukon when it acquired the White Gold property in 2009.

The real rush of majors to the westernmost Canada territory, however, began last year, when Goldcorp Inc. acquired the Coffee Gold project through a C$520 million buyout of Kaminak Gold Corp.

Since the Coffee buy-out, Barrick Gold Corp., Newmont Mining Corp. and Agnico Eagle Mines Ltd. have all staked claims to some of the hottest gold projects in the Yukon.

"Large companies are looking for a place where there is still near surface high-grade gold to be found in a geopolitically stable environment," said Goldstrike Resources COO Bill Chornobay. "The entry into Yukon of Newmont, Barrick, Agnico, Kinross, and Goldcorp is a very strong testament to that and to their belief in the future of Yukon."

Self-taught Yukon prospector Shawn Ryan ensured his place in the annals of Yukon lore during the first wave of the 21st Century Gold Rush. His discoveries, which include the White Gold and Coffee gold projects, helped to spark renewed interest in Yukon gold and helped fuel the exploration fervor that followed.

The second wave has the potential to cement his legacy.

For starters, he is chief technical officer of White Gold Corp., a new gold exploration company that owns properties that blankets roughly 40 percent of Yukon's White Gold District and has the backing of both Kinross Gold and Agnico Eagle.

Both Kinross and Agnico Eagle are leveraging their technical and operational experience to support White Gold Corp.'s pursuit of exploration and development opportunities along this gold-rich section of the Yukon.

"This investment will allow the three companies to pool their expertise together to strengthen their position in this excellent mining jurisdiction," said Kinross President and CEO J. Paul Rollinson.

White Gold Corp. is investing some C$9 million on exploring its properties in 2017 and is utilizing GroundTruth Exploration, an innovative exploration company run by Ryan's wife, Cathy Wood.

In the meantime, Goldcorp continues to make progress on advancing towards a major mine development at Coffee, another White Gold deposit discovered by Ryan.

Prior to being bought out by Goldcorp, Kaminak published a feasibility study that details an open-pit, heap-leach gold operation at Coffee producing 184,000 oz of gold annually over a 10-year mine life at all-in sustaining costs of US$550/oz.

"With the acquisition of Kaminak and its Coffee project, Goldcorp has inherited a very prospective land package with over 60,000 hectares (150,000 acres) that demonstrates potential for near mine discoveries with mineralization remaining open along strike and at depth and the potential for the discovery of a major new mineral system," Goldcorp President and CEO David Garofalo said at the time of the acquisition.

Over the ensuing year, the major has been busy exploring that potential, including roughly US$15 million of work last year and an initial phase of 2017 drilling that kicked off in March.

This year's drilling is focused on the Supremo T8-9 and Arabica targets.

The company also reports good results from Arabica, which is located about 1,500 meters east of the planned Supremo pit.

"At the Coffee camp, drill results so far have shown continuity of mineralization at both the Arabica and Supremo T8, T9 targets while initial results are positive at Decaf," Goldcorp Senior Vice President of Exploration Paul Harbidge said in July.

While exploring the property, Goldcorp is making headway on the permitting needed to build the mine.

Officially launching the permitting process with the submission of an environmental socioeconomic assessment application for Coffee, Goldcorp is targeting commercial production at its Yukon gold property by 2021.

Coffee could be the first in a series of mines resulting from the 21st Century Yukon Gold Rush.

While the White Gold District continues to draw major attention, it is not the only gold-rich region of the Yukon being invested in by global miners.

In April, Newmont closed a C$53 million deal with Goldstrike Resources to earn up to a 75 percent stake in Plateau, an expansive exploration property known for its prolific visible gold.

For several years, Goldstrike has been discovering and expanding zones of high-grade gold across Plateau, a more than 570-square kilometer (220 square miles) property in eastern Yukon. 2016, however, was a particularly successful year for the explorer – resulting in the discovery of six new high-grade gold zones on the property.

The first such find was Bonanza, discovered about 4,000 meters away from Goldstack, one of the three primary gold zones originally found along a 50-kilometer- (31 miles) trend at Plateau South.

Initial mapping of a small outcrop at Bonanza identified the most pervasive coarse visible gold seen in bedrock at Plateau property.

These discoveries, coupled with the zones already found across a broad expanse of this property caught Newmont's attention.

In March, the gold major cut a deal to earn up to 75 percent stake in Plateau.

The agreement included a C$6 million private placement financing under which Newmont purchased 12.71 million Goldstrike shares at C47.4 cents each.

As a result, Newmont has the option to earn an initial 51 interest in Plateau by paying C$8 million to Goldstrike; investing C$17.4 million on exploration at Plateau; and completing an NI 43-101 resource estimate on the property.

If Newmont decides to up its ownership of Plateau to 75 percent, it must invest another C$21.4 in exploration and complete a feasibility study for Plateau by the end of 2027.

After earning 75 percent interest in Plateau, Newmont has agreed to fund all costs until it delivers a program and budget for the development of the first mine on the property. At this point, Goldstrike has a financing option under which Newmont would fund all costs relating to Plateau, including all mine development costs, and Goldstrike would pay Newmont back from 80 percent of the explorer's share of cash flow from the mine.

Newmont and Goldstrike kicked off their 2017 program with a 10,000 line-kilometer airborne magnetic survey and district-scale geochemical program.

"We are delighted with the new partnership with Newmont and are very excited to receive the results from the proprietary, proven mine finding technologies and techniques that Newmont has implemented at the Plateau Property," said Goldstrike President and CEO Terrance King.

While waiting on the results, Goldstrike and Newmont began drilling Goldstack, a zone were abundant visible gold has been found on surface and in drill core, and Bonanza.

PSGS-16-01, drilled at Goldstack in 2016, cut 45.5 meters averaging 6.05 grams per metric ton gold. Previous drilling at Goldstack has traced a large tabular body of mineralization that is more than130 meters long, 40 meters wide and 10 to 17.5 meters thick.

With Newmont shouldering the financial and technical load at Plateau, Goldstrike can focus its attention on Lucky Strike, a large property located in the heart of Yukon's White Gold District.

"Goldstrike will now have the time and resources to advance its plans to optimize value for our shareholders on the 100-percent-owned and drill-ready Lucky Strike gold project, located in the heart of the White Gold Camp" said Goldstrike COO Chornobay.

Barrick Gold Corp. has also staked its claim in the Yukon, cutting a deal to earn up to a 70 percent interest in a portion of ATAC Resources Ltd.'s Rackla Gold, an expansive property famous for its Carlin-type gold.

In total, the Rackla property blankets a gold prospective area that stretches for some 114 miles (185 kilometers across the Yukon.

Atac has divided this massive land parcel into three separate projects – Rau, which encompasses 255 square miles (660 square kilometers) at the western end of Rackla; Osiris, a 117-square-mile (302 square-kilometers property at the eastern end of Rackla that hosts the Osiris, Conrad, Ibis, and Sunrise discoveries; and Orion, a 301-square-mile (780 square kilometers) section in the middle that hosts the Orion, Anubis, and eight other early stage Carlin-type gold prospects.

Barrick has cut a deal with ATAC to earn an initial 60 percent interest in Orion, the central project, by investing C$35 million on exploration at the project over the next five years.

Upon spending this initial earn-in, the companies will form a joint venture and Barrick can earn another 10 percent interest in Orion by investing an additional C$20 million before the end of 2026.

To further stake its claim to this gold-rich section of the Yukon, Barrick paid C$8.34 million to buy 16.68 million Atac shares, giving the major a 19.9 percent interest in the Yukon-focused explorer.

ATAC applied this major investment towards a roughly C$10 million exploration program at the Osiris and Rau projects in 2017.

"Atac's generative exploration skills and Barrick's knowledge and experience in Carlin-style systems will be a great combination to unlock the full potential of this district," said Rob Krcmarov, executive vice president, exploration and growth, Barrick.

If 2017 is any indicator, this type of collaboration between savvy exploration juniors and major gold miners looking north will be a major driver for mineral exploration and mine development in the Yukon for years to come.