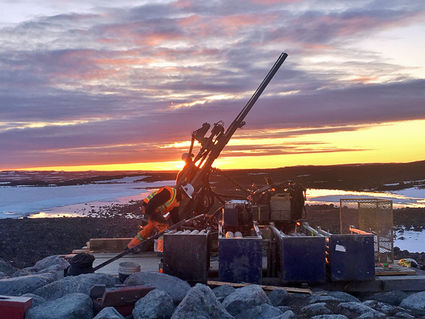 Nunavut is a vast and minerals-rich swath of the Earth's crust and Nunavummiut, or the people who live there, see mining as the foundation of the territory's future.

"The mining industry brings employment and career opportunities for residents of Nunavut and provides much-needed economic benefits to families where the cost of living is high," said Nunavut Minister of Economic Development and Transportation Monica Ell-Kanayuk.

To create the conditions for a strong mining sector, Nunavut developed Parnautit, a four pillar strategy.

• Jurisdictional framework: Establish a solid foundation of sound legislation, regulations and policies to facilitate the development of a mining industry.

• Infrastructure development: Take advantage of opportunities to improve and build Nunavut infrastructure so that developments in one sector of our economy provide broad benefits throughout other economic sectors.

• Environmental stewardship: Recognize the importance of protecting Nunavut's environment and ensure that the environmental effects of mining are always minimized and that the industry earns respect and acknowledgement as being a guardian of a clean and healthy environment.

These four pillars were built to support a new era of mining in Nunavut.

As a testament to Nunavut's commitment to fostering a robust mining sector, the vast northern territory welcomed one new gold mine in 2017, three other large gold projects are set for development, and explorers are feeding promising projects into the pipeline.

"With these exploration and development successes, the outlook for Nunavut is promising," said Kanayuk.

Going into 2017, TMAC Resources Inc. was putting the finishing touches on Hope Bay, a new high-grade gold mine in the Kitikmeot region of Nunavut.

Ramping to the full 1,000-metric-ton-per-day operating capacity of the mill, however, is taking longer than expected.

As technicians work to optimize the recovery circuits in the processing plant, TMAC continues a robust resource expansion and exploration program at Hope Bay.

In July, the company reported 14.53 million metric tons of proven and probable reserves at Hope Bay averaging 7.7 g/t (3.61 million oz) gold, 2.9 percent higher than the resource calculated in the 2015 pre-feasibility study for the project.

This year's exploration program included 16,000 meters of underground drilling at the BTD (Below the Dyke) zone of Doris, a recent discovery that is adding to the high-grade gold currently being mined.

TMAC CEO Catharine Farrow said Doris BTD "infill drilling continues to intersect high-grade gold over mineable widths. In addition, the underground development in the BTD confirms the continuity and ore grade of the ore-bearing structures at depth below the diabase dyke."

"Since acquiring the Hope Bay project in 2013, we have focused on Doris and patiently waited to initiate a major exploration campaign at Boston until we had the Doris mine in commercial production. Having achieved that, effective June 1, we recommissioned the Boston camp located about 60 kilometers (37 miles) south of the Doris complex and initiated our first drilling program there this summer," said Farrow.

Roughly 870,000 oz of the gold in the Boston resource are contained in the B2 zone, a primary target for 2017 drilling.

Farrow said the results from this year's drilling at Boston "confirm the tremendous potential to mine these high-grade zones using bulk underground mining methods."

Expected to go into production in 2019, Amaruq will replace Meadowbank as the largest gold mine in Nunavut.

Meadowbank, which began operation in 2010, has enough ore to continue operations through the end of 2018. Agnico believes it can extend the operation into 2019, which would bridge the gap between the end of Meadowbank mining and the expected start of production at Amaruq, a satellite deposit about 50 kilometers (31 miles) to the northwest.

The ore mined at Amaruq will be transported over a recently completed road to Meadowbank, where it will be processed through the existing mill.

Amaruq is slated to produce 2 million ounces of gold between 2019 and 2024, but the resource there is rapidly expanding.

Tugak, a showing about 4,500 meters west of the planned Whale Tail pit outline, is one such discovery. Early results from Tugak include 10 meters of 2.5 g/t gold near surface and 3.6 meters of 3.3 g/t gold at a depth of 100 meters.

In addition to exploration, Agnico budgeted US$78 million for development work at Amaruq in 2017. This was primarily used to finish the road between Amaruq and Meadowbank. Mining equipment to develop an underground exploration ramp at Whale Tail was one of the first deliveries made after the August completion of the road.

At about the same time the Meadowbank mill begins processing Amaruq ore, Agnico plans to begin ramping up operations at Meliadine, a gold project about 25 kilometers (15 miles) from the town of Rankin Inlet.

Agnico invested roughly US$360 million toward this goal in 2017.

On the exploration side of things, the company completed some 5,000 meters of reconnaissance drilling on the Meliadine property in anticipation of more robust regional exploration expected to intensify once the mine goes into production.

Back River gets green light

Sabina Gold & Silver Corp. is making headway towards developing a mine at Back River, a gold project about 125 kilometers (80 miles) south of Hope Bay.

In 2015, the company submitted applications to develop and operate a 3,000-metric-tons-per-day mine at Back River, on Goose, one of the properties that comprise the larger Back River project.

The proposed mine is forecast to average 198,100 ounces of gold per year over an 11.8-year mine life.

The Nunavut Impact Review Board, however, rejected Sabina's initial proposal.

Sabina resubmitted its proposal early in 2017, this time getting a green-light from NIRB. This opened the door for the company to submit permit applications to develop Back River.

"We are moving ever closer to our goal of becoming a mid-tier gold producer in one of the world's best mining jurisdictions," said Sabina President and CEO Bruce McLeod.

In the meantime, the company continues to expand upon the blue-sky potential at Back River with a 13,000-meter drill program focused on expanding zones close to the proposed mine infrastructure on the Goose property.

Sabina believes these high-grade deposits would improve the economics and extend the life of a mine developed at Back River, an operation the company hopes will bring benefits to all the stakeholders involved.

"Back River is aiming to be one of the next gold mines in Nunavut providing much-desired jobs, training, infrastructure and opportunities to the Inuit of the Kitikmeot Region," said McLeod.

When it comes to pure exploration companies, Auryn Resources Inc. carried out the largest drill program in Nunavut during 2017.

Thanks in large part to a C$35 million strategic investment by Goldcorp Inc., Auryn was able to carry out a 33,133-meter discovery drill program to investigate the district-scale potential of Committee Bay, a nearly 1-million-acre (390,000 hectares) that blankets 155-mile (250 kilometers) greenstone belt about 75 miles (125 kilometers) northeast of Amaruq.

The most exciting discovery of the expansive exploration program was made at Aiviq, a prospect 7.5 miles (12 kilometers) north of Three Bluffs.

Given its proximity to Three Bluffs and potential size, Auryn is excited to drill more holes into Aiviq.

"It is probably the best-located place we could have found a potential deposit on our belt as it is 12 kilometers (7.5 miles) north of Three Bluffs," said Auryn Executive Chairman Ivan Bebek.

While reconnaissance exploration by previous explorers had turned up some intriguing gold, the property had never been systematically explored until Auryn crews sampled and mapped the property this year.

The 2017 program included the collection of 2,987 regional till samples, rock sampling and high-resolution drone imagery across the 120-kilometer- (75 miles) long greenstone belt.

The company said reconnaissance sampling, prospecting and mapping completed at Gibsons MacQuoid this year has generated targets for a drill program planned for 2018.

A 2016 preliminary economic assessment for Chidliak envisions an open-pit mine that would average 1.2 million carats of diamonds annually over an initial 10-year mine-life.

Both kimberlites remain open at depth and an internal study indicates the potential to substantially enhance the economics of Chidliak by incorporating an underground mining operation below 260 meters at CH-6.

Three holes completed during an initial phase of 2017 drilling confirm this larger potential of CH-6.

Beyond confirming underground minable kimberlite extends beyond 500 meters below surface, the primary objective of the program, Peregrine said the drilling shows the width of the kimberlite is expanding at depth.

In August, Peregrine raised C$10.3 million, which is largely being applied toward a continuation of the 2017 drill program at Chidliak.

An updated resource for CH-6 is slated for completion by the end of 2017.

The Q1-4 kimberlite at Naujaat hosts 48.8 million metric tons of inferred resource averaging 0.54 carats per ton (26.1 million carats) of diamonds from surface to a depth of 205 meters.

One of the distinguishing characteristics of Q1-4 is the population of rare and higher valued yellow diamonds found there.

The mini-bulk sample will be analyzed for macro-diamonds and will improve the understanding of overall diamond value and the distribution of the fancy yellow diamonds within the Q1-4 kimberlite.

The kimberlite core will be used to update the geological model for Q1-4.

"All samples have now been shipped south for processing, and we look forward to seeing the impact of these results on our current model as we plan for further drilling and bulk sampling of the kimberlite in 2018," said North Arrow President and CEO Kenneth Armstrong.

The Grays Bay project – a port at Grays Bay on Coronation Gulf and a 350-kilometer- (220 miles) road that links the deep-water arctic seaport to Contwoyto Lake, near the area of the Izok Lake zinc-copper mine project being advanced by MMG Ltd. – made headway this year.

In August, NIRB approved the proposal for Grays Bay, clearing the way for the massive infrastructure project to file for permits.

It is hoped that the road would eventually be extended as an all-season road that follows the route of the ice road that currently services the diamond-rich areas of Northwest Territories, linking Nunavut's arctic coast to Yellowknife and Canada's road system.

MMG's Izok Corridor project consists of two deposits along the proposed route: High Lake, located about 50 kilometers (30 miles) south of the port; and Izok Lake near the southern end of the proposed road.

MMG submitted a project description to the NIRB to initiate the environmental review and permitting process for its Izok Corridor projects in 2012 but has since slowed the process to develop local and government partnerships that could help shoulder some C$6.5 billion in investment needed to build the road and port.

"MMG strongly believes that there are significant long-term shared benefits that collaboration and innovative partnerships can bring to Nunavut and the local communities through the development of regional infrastructure and that these benefits stretch well beyond the scope of the Izok Corridor project," the company wrote in a statement on its website.

The Nunavut government and Nunavut Resources Corp., a subsidiary of Kitikmeot Inuit Association, have formed such a partnership to build the Grays Bay project.

KIA, which is eligible for federal money that could help fund large portions of the project, is expected to build and own the port and road project.

"This project is a true partnership between government and Inuit, and it has the capability to be transformative in creating opportunity that leads to major socio-economic benefits for Inuit and Nunavummiut," said KIA President Stanley Anablak.

Once complete, Grays Bay will be the only deep-water port in Canada's Central Arctic and is expected to define northern economic development throughout the 21st century.

"We are beginning to shape the potential development of Nunavut's economic future with nation-building infrastructure," said Ell-Kanayuk.