The Trump Administration's focus on securing domestic sources of critical minerals could help re-invigorate mineral exploration and mine development in Alaska.

Working alongside the Alaska Division of Geological & Geophysical Surveys, USGS recently developed a geospatial tool that integrated and analyzed a massive load of geologic information and used this data to estimate the resource potential for six deposit types that host a large array of minerals, including most of those now deemed critical.

After crunching all the data, this tool turned up new and expanded areas of Alaska with the potential for these minerals that are vital to modern living but that the United States depends upon foreign countries for more than half of its supply.

The geospatial tool worked particularly well for identifying new areas of Alaska to explore for rare earth elements, or REEs, a group of 16 minerals that possess unique characteristics that make them important ingredients to many high-technology devises used by both civilians and the military.

While their high-tech applications make them vital to the wellbeing of the United States, the fact that more than 90 percent of these metals come from China elevates their status to critical.

Ucore Rare Metals' Bokan Mountain project in Southeast Alaska has already been identified as one potential domestic source of rare earths and a swath of Southeast Alaska extending 200 miles northwest from Bokan is known to host additional REE prospects.

While Southeast Alaska is the best known REE hunting grounds in Alaska, USGS' geospatial tool identified eight large swaths across the northern part of the state worth checking out.

The federal and state geological agencies found that, for the most part, specialized granites containing tin, indium, tungsten, titanium, tantalum and fluorspar can be found in the same regions of Alaska that are prospective for REEs.

Tungsten and titanium are primarily used for high-strength metal alloys.

Beyond the REE prospective areas, USGS' geospatial tool identified the Lost River-Kougarok region on the Seward Peninsula and a stretch of the central Brooks Range as other good places to look for the granites that host this group of critical minerals.

The largest use for this suite of metals, especially palladium and platinum, is as a catalyst to help scrub harmful emissions from petroleum burning automobiles and petroleum refineries. These metals are also used in modern electronics, such as increasing storage on computer hard disks and as an alloy for restorative dentistry.

Platinum, palladium and rhodium are used as investments and are commonly minted into physical bars and coins.

Though an economic lode-source of PGMs has yet to be discovered in Alaska, about 650,000 ounces of these obscure metals have historically been mined from Salmon River placer deposits in the Goodnews Bay area. This region of Southwest Alaska continues to be an intriguing place to look for PGMs, according to USGS' geospatial tool.

Other areas of the state, however, show higher potential. The best known of these is the Wrangellia terrane, a distinct belt of rocks along much of the southern slopes of the Alaska Range eastward through southern Yukon and into western British Columbia.

While intriguing signs of rich deposits of PGMs are found in the Alaska portion of the Wrangellia, such as the Man property about 165 miles southeast of Fairbanks, an economic deposit has yet to be identified here.

Cobalt is an important ingredient of super-alloys used to make aircraft turbine engines. This application makes up nearly half of the United States' consumption of this critical mineral.

Germanium and gallium have properties that make them important minerals in many modern applications including solar cells, infrared optics, LEDs, semiconductors and smartphones.

Bornite, a large and high-grade copper deposit that is part of Trilogy Metals' Upper Kobuk Mineral Projects in Northwest Alaska, is one carbonate-hosted deposit with significant quantities of cobalt.

Interestingly, USGS' geospatial tool found that almost the entire length of the Brooks Range, especially the underexplored northern slopes stretching the entire width of Alaska, is prospective for the style of copper deposits known to host cobalt, germanium and gallium. 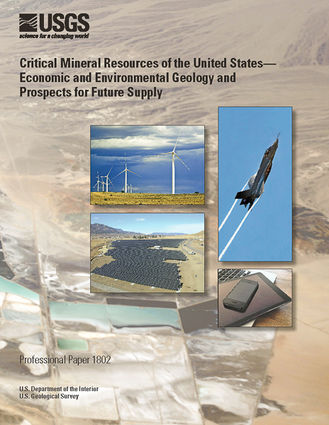 For explorers seeking critical minerals, the new and under-explored areas turned up by the geospatial tool may provide enough data to unearth new deposits in areas where no one has thought to look.

The full report – complete with source information, datasets and maps – can be found under the title "GIS-based identification of areas that have resource potential for critical minerals in six selected groups of deposit types in Alaska" in the publications section of USGS' website.