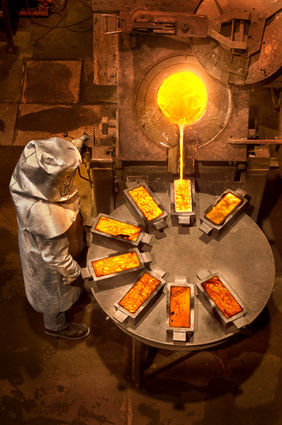 With the price for an ounce of gold pushing back above US$1,300 to ring in the new year – along with zinc and copper selling at multi-year highs and trending higher – 2018 is shaping up to be a good year for Alaska's mining sector.

While there is currently no significant copper production in Alaska, the Far North state hosts significant advanced staged copper exploration projects that will likely benefit from the rising price of this increasingly demanded metal.

Most analysts predict that, short of geopolitical unrest driving safe-haven demand, gold prices will hold in the US$1,300/oz range in 2018, trading between US$1,200 and US1,400/oz during the year.

ScotiaMocatta, the metals banking division of Canada's Scotiabank, sees gold markets as "fairly well-balanced" and is "mildly bullish" for the price of the precious metal for 2018.

"We expect prices to work higher through the headwind of firmer US monetary policy and expect there will be further bouts of safe-haven buying on the back of the North Korea situation," the bank wrote in its "Precious Metals 2018 Forecast".

Gold prices holding steady at around US$1,300/oz is good news for Alaska, a state that produces nearly 1 million ounces of the precious metal each year.

Donlin Gold partners – Barrick Gold Corp. and Novagold Resources Inc. – are expected to make a formal decision on developing a mine at this world-class gold project in the coming months.

While gold is an iconic and important contributor to Alaska's mining sector, at today's prices zinc is the state's top metal in terms of value produced each year. This is especially true with the surge in zinc price during 2017.

Going into 2018, zinc is selling for around US$1.50 per pound, which is roughly a 25 percent increase over US$1.20/lb levels going into 2017 and the highest price for the galvanizing metal in more than a decade.

With demand outpacing supply and only a few days of zinc in major metals exchanges inventories, analysts predict that the price of this metal will continue to rise.

Scotiabank expects zinc to average US$1.50/lb this year and continue to move higher into next.

"We anticipate further gains for zinc as markets remain tight over the next two years, with prices expected to peak and average US$1.60/lb in 2019," the Canadian bank wrote in its December commodities report.

This forecast is great news for Teck Resources Ltd., operator of Red Dog, and NANA Regional Corp., the Alaska Native corporation that owns the land where this world-class zinc mine is located.

Red Dog produced roughly 1.2 billion lb of zinc in 2017, which is about 5 percent of the world's global supply of this important industrial metal.

While zinc is the primary metal produced at Red Dog, it also is an important tertiary metal at Hecla's Greens Creek Mine.

Thanks to zinc, along with healthy portions of lead and gold, the cost to produce an ounce of silver at this Southeast Alaska operation was negative US15 cents during the third quarter of 2017.

With continued strength in zinc and gold prices, these metals could very well pay Hecla's costs for mining silver at Greens Creek in 2018.

As the cost to produce on ounce of silver at Greens Creek falls into negative territory, many analysts are predicting the price of this precious metal is on the rise.

The Bank of Montreal, however, sees healthy silver price gains coming in 2018.

The Canadian bank predicts the grey metal will reach US$19/oz this year.

"We are finally beginning to see evidence of silver industrial demand picking up with strong global growth, as the impact of both thrifting and substitution appear to fade. Therefore, strong global growth should, in our view, lead silver to outperform gold, as it has in previous expansion phases," Goldman Sachs analysts inked in a December report.

Scotiabank predicts that silver demand will pick up in 2018 but sees increased supply keeping price gains modest for the year.

"More widespread economic growth should lead to a pick-up in household spending on luxury items, which could give the jewelry market a much-needed boost after being in the doldrums in recent years," ScotiaMocatta analysts penned in a December silver report. "We also expect growth in solar power to remain strong, especially as more electricity will be needed to fuel the growing market for electric vehicles."

ScotiaMocatta is anticipating a balanced silver market this year with prices ranging from US$15 to US$19/oz.

Earlier in 2017, analysts forecast that the copper market would lose steam and prices would retreat by the end of the year – predictions that did not come to fruition.

At least part of the reason the price of copper is continuing to be driven upward is the demands of the growing electric car industry.

"Pure electric vehicles contain almost four times more copper than a combustion engine - at around 80 kilograms (175 lb) per vehicle - clearly a step change for demand that is to be accelerated as China grapples with its pollution problem," Max Court, senior commodity analyst at S&P Global Market Intelligence Metals & Mining Research penned in a December report.

While copper is not currently produced in Alaska, the state hosts world-class deposits that are on pace to deliver the electrical conductive metal to world markets in the coming years.

In December, Pebble Partnership submitted permit applications for the Pebble Mine project to U.S. Army Corps of Engineers, initiating the project review process under the National Environmental Policy Act.

With permitting and construction, it is expected that it will be at least a decade before Pebble is ready to begin supplying copper to the growing demand driven by electric vehicles.

"Across 200 key copper mines, head grades of treated copper volumes have fallen from approximately 0.75 percent in the early 2000s to 0.56 percent today, and are expected to decrease further to 0.54 percent by 2020," the S&P Global Market Intelligence analyst wrote. 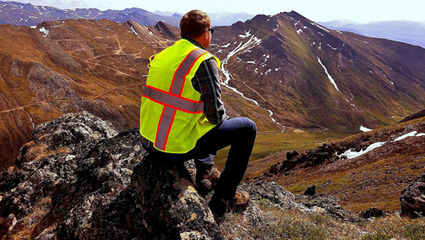 Trilogy is currently finalizing a prefeasibility study for Arctic, a milestone that advances this spectacularly high-grade deposit another step toward permitting and development.

With its mix of base and precious metals, Arctic serves as a microcosmic example of Alaska's mining sector as a whole – a sector that is positioned to benefit from strong gold, zinc, silver and copper prices in 2018.