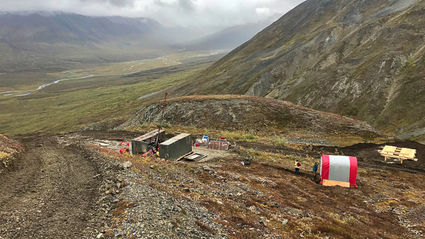 The 2017 drilling at the Stellar project in Alaska primarily focused on confirming and expanding a historical resource estimate for Zackly, a high-grade gold-copper skarn deposit on the property.

With fresh funds in the bank and partners exploring the gold, copper and silver projects it has generated in Alaska, British Columbia and Mexico, Millrock Resources Inc. is positioned well for 2018.

As a project generator, Millrock is leveraging its team's geological expertise by identifying and acquiring promising mineral projects, completing preliminary exploration aimed at bolstering the their potential and then vending them to partners to fund the more advanced stages of exploration.

The downturn in the mining sector from 2011 to 2016 allowed the project generating company to acquire promising mineral properties at rock bottom prices.

With markets recovering, Millrock has been able to match exploration funding partners to several of the roughly 24 mineral exploration projects it has generated in recent years.

Unlike past upward swings in the mineral exploration sector, however, this recovery has been more cautious.

"Metal prices and investor interest fluctuated significantly over the year, but despite the market fluctuations, we were successful in delivering on the two areas most important to our approach to early-stage mineral exploration – new funding partnerships and new project generation," Millrock President and CEO Greg Beischer said.

As a result, roughly 90 percent of the US$5 million of exploration completed last year on Millrock properties were funded by partners seeking to earn a stake in the exploration projects the company has generated.

With markets continuing to improve, along with new projects and partnerships on the horizon, Millrock is looking forward to what is shaping up to be an even busier year in 2018.

"We continue to carry forward into 2018 the spirit of optimism that has proved so valuable for us over the previous years," said Millrock President Greg Beischer. "The cycle has changed for the better and Millrock is well situated to take advantage. We have a number of strong chances to make a transformative mineral deposit discovery in the year ahead."

In Alaska, global miner Kinross Gold Corp. cut a deal to earn up to a 70 percent stake in Millrock's Liberty Bell gold-copper project.

A road-accessible property about 70 miles southwest of Fairbanks, Liberty Bell is prospective for copper-gold porphyry and associated gold deposits.

Historical exploration at Liberty Bell identified a gold-bearing skarn that is remarkably similar to the gold-rich Peak deposits Contango ORE Inc. discovered at the Peak Gold project about 190 miles to the east.

To earn the 70 percent stake in Liberty Bell, Kinross must invest US$5 million in exploration over five years; pay US$145,000 in advanced royalty payments over the same timeframe; and pay an additional US$145,000 in management fees if Millrock manages the programs over the duration of the agreement.

Millrock did manage the 2017 field program, which included more than 1,600 soil samples, along with stream sediments and rock samples.

This work was designed to narrow down drill targets for a drill program being planned for this year.

While targets were being developed at Liberty Bell, drills were turning at Stellar – another road accessible, Millrock generated property about 130 miles to the southeast.

As a result, PolarX gained ownership of Stellar and Millrock owns 10.74 percent of the issued and outstanding shares of PolarX.

Millrock also receives fees for managing the exploration of Stellar and is entitled to certain milestone and royalty payments on portions of the project.

The 2017 program at Stellar included induced polarization geophysical surveys ahead of a 2,055-meter drill program primarily focused on confirming and expanding a historical resource estimate for Zackly, a high-grade gold-copper skarn deposit on the property.

One such example is hole ZM-17002, which cut 33.4 meters averaging 1.16 percent copper and 1.27 g/t gold. This is substantially wider than the nearby historical hole Z-43, which cut 6.1 meters of copper-gold mineralization.

Results from six holes are pending and the updated mineral resource for Zackly is slated for completion in the coming weeks.

PolarX said there is evidence that a mineralized structural corridor running 6,000 meters west from Zackly to the Mars prospect may host several buried porphyry copper-gold deposits and this prospective corridor is a high priority target for future exploration.

Oweegee, which lies along the eastern boundary of Pretium's Brucejack property, has a long exploration history that includes airborne geophysics, ground sampling and drilling. One hole drilled there in 2007 cut 138.67 meters averaging 0.189 g/t gold and 0.074 percent copper, including a 17.14 meters section that averaged 0.468 g/t gold and 0.11 percent copper.

As soon as the agreement with Sojourn was finalized, Millrock geologists began a comprehensive stream sediment sampling and targeted soil sampling program across the Oweegee Dome property.

Sojourn said the results of this program turned up anomalous silver, lead and zinc in the areas of previously identified volcanogenic massive sulfide targets; as well as copper and gold near porphyry target zones.

"Millrock and Sojourn have identified numerous high-priority drill targets through systematic, property-wide exploration; an approach that had been previously lacking," said Millrock Chief Exploration Officer Phil St. George. "The targets are situated at the same stratigraphic level that has produced many other mines and deposits known to exist in the Golden Triangle District, and will be well worth drill testing."

Willoughby, which lies adjacent to IDM Mining's Red Mountain property near Stewart, also has a long exploration history, including two phases of drilling.

The 2017 program at Willoughby focused largely on prospecting the margins of glaciers that have receded substantially since the last exploration there nearly a decade ago.

This work turned up new zones of mineralization at some of the freshly exposed bedrock revealed by recent retreat of glaciers and snowfields.

Millrock said both properties are ready to drill.

As Sojourn funded exploration at Oweegee Dome and Willoughby, Millrock invested its own money on stream sediment sampling at Todd Creek, a property about 19 miles (30 kilometers) northeast of Stewart that is prospective for Eskay Creek-type, gold-enriched volcanogenic massive sulfide and gold-copper porphyry deposits.

The company said the 2017 program, which covered a 3.7-mile- by 10-mile-area, affirmed multi-element anomalies in areas of known base and precious metal mineralization along a six-mile stretch of the Todd Creek valley.

The coincident geochemical and geophysical anomalies at Surveyor are priority targets for follow-up exploration in 2018.

Millrock consultants familiar with historic work on the Todd Creek project report that this valley was filled with snow and ice in 2008, the last time which exploration crews were active on this project.

The MJ area is another high priority for follow-up at Todd Creek in 2018.

Millrock said it is currently negotiating an earn-in agreement with a funding partner for Todd Creek.

Mexico for the winter

With winter conditions limiting the ability to advance its northern properties, Millrock crews are carrying out exploration on its extensive portfolio in Mexico. 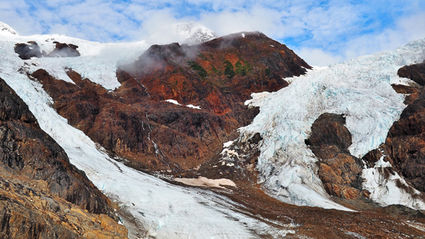 This alliance turned up La Navidad, a property that shows promise for hosting bulk-minable, oxidized gold deposits that could yield its gold with inexpensive heap leach recovery techniques.

Following mapping, sampling and geophysical surveys, the strategic partners drilled 12 holes at this property in December. Assays from this inaugural drill program are pending.

The strategic alliance also turned up El Picacho. Mapping, sampling and geophysics completed on this gold property last year turned up several prospects across this property that deserve a closer look.

Millrock said drilling of the best prospects at El Picacho is being contemplated later in the year.

In total, Millrock has generated 15 projects in Mexico.