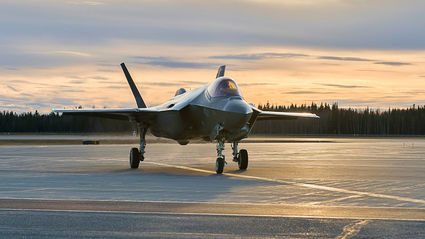 This U.S. Air Force F-35A Lightning II fighter is conducting cold weather testing at the Eielson Air Force Base in Interior Alaska. Aluminum, manganese and rare earths are among the many critical minerals that go into building these advanced aircraft.

For the fourth year running, Rep. Mark Amodei, R-Nevada, has put forward the legislation aimed at streamlining the process for permitting strategic and critical minerals in the United States.

"Critical and strategic minerals are essential to the technologies that make our daily lives and economy work. Unfortunately, when it comes to mining strategic and critical minerals domestically, duplicative regulations, bureaucratic inefficiency, and lack of coordination between federal agencies unnecessarily threaten our economy and jeopardize our national security," said Amodei.

With the National Strategic and Critical Minerals Production Act, or H.R. 520, the Nevada Congressmen aims to eliminate much of these inefficiencies that plague mine permitting in the U.S. and limit the total time to authorize a critical minerals project to 30 months, substantially shorter than the roughly seven to 10 years that it currently takes.

"Congressman Amodei's bill ... is an important first step in bringing the U.S. mine permitting system into the 21st Century," said National Mining Association President and CEO Hal Quinn. "In making key permitting systems more efficient, we also boost the country's economy, manufacturing renaissance and pave the way for much needed repairs to our crumbling infrastructure."

While previous renditions of Amodei's critical mineral legislation have gained traction in the House during each of the previous three Congresses, the proposed mining legislation has failed to get passed in the Senate.

On March 7, this year's version of the legislation passed out of the House Natural Resource Committee.

If the legislation can garner the necessary Senate votes, it will land on the desk of the President who is already taking action to break America's dependence on foreign minerals.

In December, President Trump issued an executive order calling on federal agencies to devise a strategy to ensure America has a reliable supply of critical minerals.

"It shall be the policy of the federal government to reduce the nation's vulnerability to disruptions in the supply of critical minerals, which constitutes a strategic vulnerability for the security and prosperity of the United States," reads the order.

"Having introduced critical minerals legislation that has passed out of the House the last three Congresses in a row – and watching that bill run straight into Senate paralysis – I appreciate the fact that the Administration has taken the lead on this issue and is moving the ball toward the goal line," said Congressman Amodei.

Trump's critical minerals executive order instructs Secretary of Interior Ryan Zinke and Secretary of Defense James Mattis to identify and publish a list of critical minerals, and develop a strategy to reduce the United States' import reliance for these increasingly important ingredients to modern personal and military devices.

The executive order defines a critical mineral as "a non-fuel mineral or mineral material essential to the economic and national security of the United States, the supply chain of which is vulnerable to disruption, and that serves an essential function in the manufacturing of a product, the absence of which would have significant consequences for the economy or national security."

The U.S. Geological Survey published a list of 35 minerals that it believes fit this description.

• Aluminum (bauxite), used in almost all sectors of the economy;

• Beryllium, used as an alloying agent in aerospace and defense industries;

• Cesium, used in research and development;

• Chromium, used primarily in stainless steel and other alloys;

• Fluorspar, used in the manufacture of aluminum, gasoline, and uranium fuel;

• Gallium, used for integrated circuits and optical devices like LEDs;

• Magnesium, used in furnace linings for manufacturing steel and ceramics;

• Potash, primarily used as a fertilizer;

• Rubidium, used for research and development in electronics;

• Tin, used as protective coatings and alloys for steel;

• Titanium, overwhelmingly used as a white pigment or metal alloys;

A majority of the minerals on this list are found in Alaska. 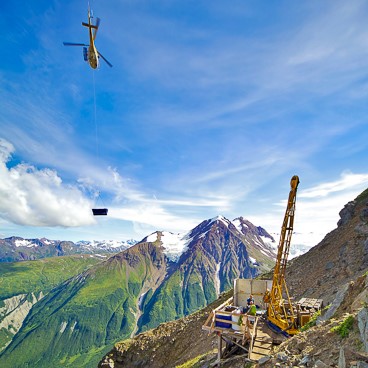 Best known for its copper and zinc, the VMS deposit at Constantine Metal's Palmer project in Southeast Alaska is roughly 25 percent barite, a mineral considered critical to the United States.

"The unique and resource-rich geology in Alaska makes the state an excellent candidate for finding critical minerals," said Congressman Don Young, R-Alaska. "This strategic decision by President Trump will ensure that the U.S. is more self-sufficient and that our military can operate without risk of losing access to these crucial minerals while helping create jobs and boost both the Alaskan and national economy."

In the meantime, Amodei hopes his persistence pays off and he can move his critical and strategic mineral legislation off Capitol Hill and onto the President's desk.

"If history is any indication, I fully expect this bill to successfully pass out of the House when it comes to the floor for a vote – as it has the last three Congresses in a row. "(I) urge the Senate to follow our lead once this legislation comes its way," said the Nevada Congressman.