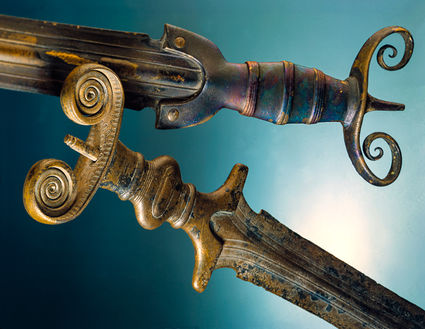 This pair of swords from 10th Century BC are examples of the strategic advantage bronze, a tin-copper alloy, provided civilizations during the Bronze Age, an era that spans more than 2,000 years of human history. In the Information Age, we continue to almost exclusively use tin in alloys, mixtures that keep tin on the list of critical minerals.

Primarily associated with cans, cups and roofs, tin may not be the flashiest metal on the market, but it has been a strategic metal that has defined human progress since the onset of the Bronze Age around 5,500 years ago and is on the list of minerals critical to the security of the United States even today, according to the U.S. Geological Survey.

With more than 100 known lode and placer tin occurrences, Alaska happens to be the best place to look for domestic sources of this important alloy metal in the United States.

"Today, Alaskan tin deposits are known to be widespread, occurring from the central Alaska Range north to the Brooks Range and across Interior Alaska ... Southwest Alaska and the Seward Peninsula," according to the 1997 publication, Mineral Deposits of Alaska.

And where tin is found in Alaska, several of the 34 other minerals the USGS considers critical are usually not too far away.

The first civilizations to discover that mixing a little tin with copper created bronze, a more durable metal for weapons and tools, had a strategic and economic advantage over their counterparts. This advantage was so powerful that we now consider the Bronze Age one of the most important epochs of human history, an era that spans more than 2,000 years.

Not unlike our Bronze Age forebearers, we continue to almost exclusively use tin in alloys, mixtures that keep tin on the list of critical minerals.

In 2017, the United States consumed roughly 90 million pounds of tin for bronze, brass and other alloys; cans and containers; solder; bearing surfaces and other applications.

None of this tin was mined in the U.S. Instead, roughly 75 percent America's tin supply was imported and the balance was the product of recycling.

The average price paid for this tin was around US$9.50/lb.

Alaska's tin potential has been documented for more than a century. In fact, the western tip of the Seward Peninsula had rich enough deposits of this alloying metal to encourage miners to establish Tin City, a small mining town about 90 miles northwest of Nome, in 1904.

While Tin City and the mines it hoped to support were short-lived, this area near the western tip of the Alaska Peninsula is still known for its rich tin deposits.

Other tin prospects found near Cape Mountain include Lost River and Potato Mountain.

Work in the 1980s estimated a portion of the tin-bearing granites there hosts some 6 million lb of tin in 240,000 tons of historical resource averaging 1.3 percent tin. Some of the tin deposits at Kougarok have an appreciable amount of niobium and tantalum, both on the USGS list of critical minerals.

Tin has also been produced from placer deposits in Interior Alaska. This production, however, has been limited and mostly as a product of gold mining.

The tin in at least one Interior Alaska stream – Boulder Creek in the Circle Mining District – is so prolific that it "plugs" the placer recovery plant, making it a nuisance for miners attempting to recovery the gold from this stream about 125 road miles northeast of Fairbanks.

While there has been no systematic testing of the placer tin content, a miner attempting to recover the gold in a particularly tin-enriched portion of the creek estimated the gravel contained more than 2 lb of cassiterite, a primary tin mineral, per yard.

An investigation carried out by James Barker for the U.S. Bureau of Mines indicates that the lode source of this tin mineralization is very close.

"Cassiterite occurs as fresh unweathered crystals up to 3/8 of an inch long, some of which are attached to gangue rock," he wrote in a 1979 report. "Tin is particularly concentrated in the coarser size fractions. The gold is also quite fresh, occurring primarily as thin irregular flakes. The balance of the concentrate consists of rounded nuggets of hematite, magnetite, and scheelite."

Scheelite is a tungsten mineral, which the USGS also considers critical.

One sample of fresh granite collected by Barker near Boulder Creek returned 20 parts per million tin and 22 ppm tungsten. The sample also contained gold and molybdenum.

Tin and tungsten have been found in many of the other creeks in the region – Bedrock, Deadwood, Independence and Half Dollar, to name a few.

The Lime Peak and Mount Prindle areas to the west of the Circle Hot Springs granitic intrusive feeding these creeks also has tin and tungsten mineralization.

The most widely known placer tin deposit in Interior Alaska, however, is the Tofty tin belt, a 12-mile-long area of tin- and gold-bearing gravels in the Manley Hot Springs district, another gold-rich area of Interior Alaska.

While it is unclear how much tin has been recovered from the streams of this mining district about 90 miles northwest of Fairbanks, much like the area around Tin City, gold miners were recovering placer cassiterite at the dawn of the 20th Century.

"Gold mining in the district developed rapidly, and as the productive area in the vicinity of Tofty increased it was found that tin and gold were generally associated and that the richer concentrations of the two minerals were generally coincident," Henry Eakin wrote in a 1914 report, "Tin Mining in Alaska."

Like Boulder Creek, the high tin concentrations plugging the riffles of their sluice boxes was a nuisance to the early miners attempting to recovery placer gold in the Hot Springs District. These miners, however, soon decided to try to cash in on the piles of cassiterite piling up on their claims.

In 1911, about 1,200 pounds of tin concentrates accumulated from cleaning out the sluice boxes were shipped to Singapore for processing.

"The ore was found to be of high quality, and the returns from the small shipment directed attention for the first time to the possible value of tin as a by-product," Eakin penned.

And in 1914, roughly 48 tons of tin was shipped from the gold mines in the Hot Springs district.

Over the years since, various miners have recovered cassiterite as a by-product of gold mining.

A search for the lode source of the tin found in the stream did not turn up appreciable amounts of cassiterite but samples collected by the Alaska Division of Geological and Geophysical Surveys did find intriguing quantities of other minerals now considered critical by the USGS.

About 60 miles north of the cassiterite-bearing streams at Tofty, Ucore Rare Metals has found that the rare earths-rich placer deposits on its Ray Mountains property contain appreciable amounts of tin and other critical minerals.

Concentrates from gravity separation of placer samples collected at Ray Mountains returned up to 50 percent tin; 10 percent rare earths; and 0.01 to 1 percent tungsten, tantalum and niobium.

A definitive lode source of the 100-meter-deep critical mineral-bearing gravels at Ray Mountains has yet to be identified.

One place where the lode source of tin has been found is in the Alaska Range south of Fairbanks.

Coal Creek, a 2,400-acre property just west of the Parks Highway roughly halfway between Anchorage and Fairbanks, is one such property that has garnered some interest in recent years.

Discovered by Charles Hawley in 1972, Coal Creek was staked for its tin-silver potential by Houston Oil and Minerals in 1980. Over the ensuing five years, this exploration company carried out exploration programs that included 5,240 meters of drilling in 42 holes.

A preliminary resource calculated for Houston Oil and Minerals in 1982, estimated the drilled portion of the Coal Creek deposit contained roughly 4.8 million metric tons averaging 0.27 percent tin, according to data published by the U.S. Geological Survey.

While the resource does not meet the rigor of current reporting standards, sampling of core stored at the Alaska Geologic Materials Center and four holes drilled by Brett Resources in 2006 confirms the tin-silver potential of this easily accessible property.

Tungsten and gold also have been identified at Coal Creek. Choice grab samples collected from the property in 1990 turned up 720 g/t tungsten, 65 g/t silver, 0.5 g/t gold and 4.86 percent zinc.

Like the other tin deposits in Alaska, Coal Creek has tin-bearing neighbors enriched with a suite of other critical minerals.

Ohio Creek, another Hawley discovery to the northwest, has yielded a wide variety of minerals and metals.

A study completed by the U.S. Bureau of Mines in the 1980s identified wodginite, a manganese-tin-niobium oxide; tungsten; gold; silver; palladium, a platinum group metal; and a suite of rare earths in the area.

As part of Alaska's Strategic and Critical Minerals Assessment project, the Alaska Division of Geological & Geophysical Surveys re-analyzed rock samples from the earlier study. A report published by DGGS in 2014 confirmed the earlier findings.

Strongbow Exploration Inc. acquired Coal Creek and commissioned a technical report on the property in 2015 but has not followed up with any significant exploration there.

The Kuskokwim Mountains of Southwest Alaska is another place known for its tin potential and Strongbow also holds a cassiterite-bearing property there.

This property, Sleitat, was explored by Cominco (now Teck Resources) in the 1980s, which discovered two zones of tin mineralization.

One hole drilled by Cominco cut 3.1 meters of 12.55 percent tin and 197.5 g/t silver. The overall deposit evaluated by the nine holes drilled by the company was much lower grade.

Using the information from Cominco drilling and surface sampling, the Bureau of Mines estimated the area of known mineralization at Sleitat encompassed roughly 25.9 million metric tons averaging between 0.22 and 0.37 percent tin, 17 g/t silver and 0.04 percent tungsten.

Three other prospects in the Kuskokwim region of Southwest Alaska – Bismarck Creek, Win and Won – are also prospective for tin.

Based on extensive surface sampling, it is estimated that the Bismarck Creek deposit contains 500,000 metric tons averaging 0.14 percent tin and 47.8 g/t silver.

Sampling at Win, located about 20 miles north of McGrath, yielded several high-grade samples of polymetallic mineralization. One 7.75-foot channel sample collected by the Bureau of Mines in 1992 returned 18.82 oz/t silver and 6.97 percent tin. 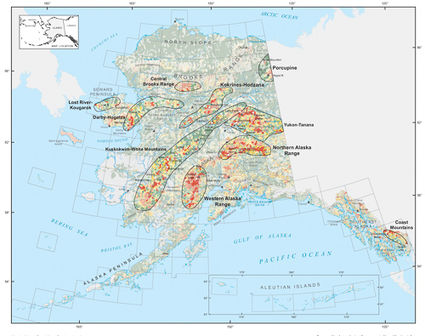 This map shows areas of Alaska that are prospective for the specialized granites that carry tin and a host of other minerals considered critical to the United States. The areas in red are considered to have the highest potential.

Despite the high-grade metals found at Win, no drilling is reported for this prospect.

The tin-bearing veins at the Won prospect, however, have been drilled.

Two holes drilled by Anaconda Minerals Company cut up to 6.9 percent tin and 3.3 oz/ton silver, along with antimony, lead, arsenic, copper, and tungsten over unknown widths.

The authors of a 2004 USGS report, "Metallogenesis and Tectonics of the Russian Far East, Alaska, and the Canadian Cordillera," the Win and Won prospects "contain some of the most important tin-polymetallic resources in the Kuskokwim Mineral Belt and perhaps in all of Alaska."

Like the other tin-enriched regions of state, a winning search for tin in Southwest Alaska will likely lead to the discovery of a suite of the minerals the USGS considers critical to America's security and economic well-being. This makes tin an ideal "gateway metal" for anyone exploring the Last Frontier's rich critical minerals potential.