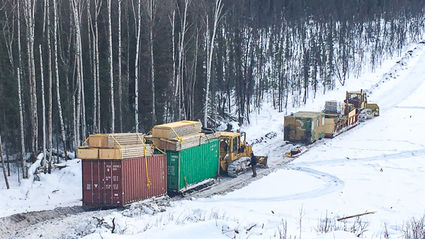 After trekking roughly 71 miles across Alaska's Interior on a winter trail west from Delta Junction, Australia-based White Rock Minerals Ltd. has delivered the drill, camp and other supplies needed to explore the zinc-rich volcanogenic massive sulfide deposits and prospects at its Red Mountain project in the Bonnifield Mining District.

With two zinc-rich VMS deposits that are open for expansion and 30 other targets with similar geophysical signatures across its roughly 35,300-acre property, the Down Under exploration company has a lot to be excited about up north.

To gain a better understanding of the Red Mountain potential, White Rock has plans for a busy 2018 summer season that includes 6,000 meters of drilling and a comprehensive geophysical program.

"Our drill program for the 2018 summer field season aims to further build on our geological knowledge of the mineralization, increase confidence in the resource base, expand the already globally significant resources at the existing deposits and discover new deposits," said Gill.

While the two main deposits at Red Mountain – Dry Creek and West Tundra Flats, or WTF – have more than 120 holes drilled into them, a deposit had not been defined to modern reporting standards until last year, when White Rock had a calculation completed that met the standards of the Australian Joint Ore Reserves Committee (JORC).

"Importantly, the two deposits identified within the company's extensive land holding immediately placed the Red Mountain zinc project as one of the highest grade and more significant deposits of any zinc company listed on the ASX (Australia Stock Exchange) and an important VMS asset within a global context," said Gill.

Dry Creek, situated about 2,750 meters southeast of WTF, hosts the balance of the metals defined so far at Red Mountain.

Upgrading and expanding these zinc-rich VMS deposits will be the focus of an initial 3,000 meters of drilling slated to begin by early June.

Where you find one volcanogenic massive sulfide deposit, there are usually othe nearby. White Rock sees evidence that the expanded Red Mountain property blankets such a VMS camp and plans to test some of the highest priority targets this year.

"In addition to drilling, White Rock will be refining the 30 earlier staged prospects across the Red Mountain property with additional sampling and ground geophysics," said Gill. 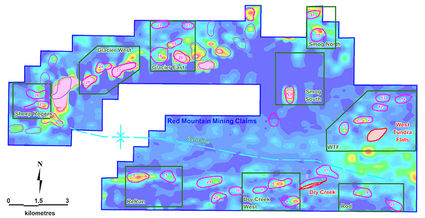 In addition to zinc-rich deposits, the company sees the potential for this investigation could turn up gold-rich VMS, which are often missed during early exploration because they are not as enriched in the base metals being sought.

"This provides an exciting opportunity for potential further discoveries at Red Mountain," the company said, referring to the gold prospectivity.

White Rock plans to pick the five most promising targets at Red Mountain for further exploration.

"We plan to drill the best of these regional targets towards the end of this drilling campaign," said Gill.

With the drill, camp and supplies already delivered to Red Mountain, White Rock has a good start on its plans to expand the known high-grade zinc deposits and explore the district potential of this expansive VMS project in Interior Alaska.