Company raises $28.7M; enough to get Arctic into permitting 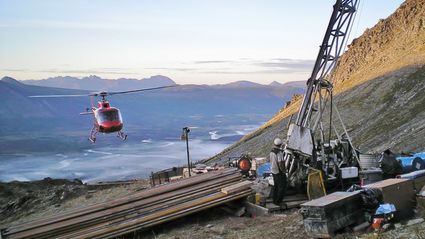 A helicopter approaches during the 2007 drill program at Arctic, a high-grade VMS deposit in the Ambler Mining District.

A US$28.7 million financing that closed today provides Trilogy Metals Inc.the funds to take major strides in achieving its goal of beginning to develop the vast mineral potential that the world-class Ambler Mining District in Northwest Alaska has to offer.

In a deal announced on April 16, a syndicate of underwriters led by Cantor Fitzgerald Canada Corp. –including Cormark Securities Inc., BMO Capital Markets and Roth Capital Partners – has agreed to buy on a bought deal, underwritten basis 24.78 million Trilogy shares at US$1.16 per share.

A group of large shareholders nabbed roughly 74 percent of the shares offered.

South32 Ltd. took approximately 40 percent of the shares, worth about US$11.5 million, which represents the top end of that company’s participation rights included in a deal to acquire 50 percent interest in Trilogy Metal’s project in the Ambler Mining District.

Other large buyers into the offering were Electrum Strategic Opportunities Fund, which acquired about 20 percent of the shares; The Baupost Group LLC, taking about 10 percent; and Selz Capital, which bought about 4 percent of the offered shares.

The roughly US$25 million being raised is adding to the already healthy amount of cash Trilogy has on-hand, which was roughly US$12 million when you include the US$10 million South32 Ltd. has deposited to continue exploration of the copper-rich Bornite deposit this year.

While this is not enough money to realize the first commercial quantities of copper, zinc, lead, cobalt, gold or silver from the Ambler District, it is sufficient to complete a feasibility study for Arctic and initiate permitting for this metals-rich volcanogenic massive sulfide deposit, slated to be the first mine developed in the district.

“The funds recently raised puts the company in a strong position to advance the Arctic project towards feasibility and permitting over the next three years,” said Trilogy Metals CEO Rick Van Nieuwenhuyse.

Arctic has been a prize that global mining companies have had their eye on since Kennecott Exploration Company discovered high-grade copper-zinc-gold-silver there in the 1960s. Its location – north of the Arctic Circle and 200 miles from the nearest road – however, has hampered development of this world-class asset.

While Arctic is likely to be the first deposit developed in the Ambler District, it is not the only world-class asset in this remote region of Northwest Alaska. A string of more than a dozen other VMS deposits and prospects are found along a 70-mile stretch of the Ambler Mining District and Bornite, an enormous high-grade copper deposit about 16 miles away from Arctic are also found here.

In 2012, Trilogy entered into a landmark agreement with NANA Regional Corp. that combines Arctic and the other VMS targets located on Alaska lands held by Trilogy with Bornite and other carbonate-hosted copper prospects located on adjacent NANA lands into one project known as the Upper Kobuk Minerals Project, or UKMP.

Upon a construction decision at UKMP, NANA has the option to acquire a 16 to 25 percent direct interest in the expansive mining project. If the Native corporations decides not to invest, it would receive a 15 percent net proceeds royalty from any mines developed on the 353,000-acre land package.

By bringing these valuable assets into one company and building key partnerships with local stakeholders, the state of Alaska and a global mining company, Trilogy has a formula that could finally lead to the development of Arctic and its metals-rich neighbors in the Ambler Mining District.

A prefeasibility study completed last month outlines plans for a mine at Arctic that is expected to produce 1.9 billion pounds of copper, 2.4 billion lb of zinc, 405 million lb of lead, 367,531 ounces of gold and 40.2 million oz of silver over an initial 12-year mine life.

The US$28.7 million raised provides Trilogy with the funds to refine this mine plan to the feasibility study level and get started on permitting the proposed mine.

“This keeps us aligned with the expected progress on advancing the Ambler Mining District access road through permitting and a construction decision,” said Van Nieuwenhuyse.

“Additional funds could be used to explore the Ambler VMS belt to look for additional polymetallic resources which could potentially extend the mine life at Arctic,” the Trilogy Metals CEO added.

Alaska Industrial Development and Export Authority, a quasi-state-owned entity established by the Alaska Legislature in 1967, is advancing permitting of the Ambler Mining District Industrial Access Road.

More widely known as the Ambler Road, this proposed 211-mile transportation corridor is the key to unlocking the world-class deposits in the Ambler Mining District.

Trilogy and AIDEA entered into an agreement in 2015 that paves the way for the state development authority to investigate various ways to fund the construction and maintenance of the Ambler Road and create the framework by which this investment would be paid back from mines developed across the rich mining district at the road's terminus.

The importance of this road has been understood at the national level for at least four decades.

In fact, U.S. lawmakers included special provisions for this access when they passed the Alaska National Interest Lands Conservation Act in 1980.

Section 2011(4) of ANILCA reads, “Congress finds that there is a need for access for surface transportation purposes across the Western (Kobuk River) unit of the Gates of the Arctic National Preserve (from the Ambler Mining District to the Alaska Pipeline Haul Road) and the Secretary shall permit such access in accordance with the provisions of this subsection.”

This provides direct instructions on permitting the roughly 25-mille section crossing the Gates of the Arctic park – most of the rest of the road would traverse state lands.

Ideally, the road and first mine would be completed about the same time. To keep the road side of this development on schedule, AIDEA submitted applications in 2016 for rights-of-way, permits and related authorizations needed for the road.

The public scoping phase of the Ambler Road wrapped up in January and a draft environmental impact statement for the industrial access is now underway.

U.S. Bureau of Land Management, the lead federal agency for the Ambler Road, anticipates the draft EIS will be completed next march and the final EIS is slated by the end of next year.

"Solid progress was made with the Ambler Mining District Industrial Access Project through the selection of the third-party contractor to assist BLM in the Scoping Phase of the Environmental Impact Statement process, and with the National Park Service Environmental and Economic Assessment study under ANILCA," AIDEA Chairman Dana Pruhs penned in the authority’s annual report, published earlier this year.

As the Ambler Road works its way through the permitting process, and the Arctic Mine project following shortly after, South32 continues to expand and upgrade the high-grade copper at Bornite, likely to be the second high-grade copper mine developed in the district.

Early last year, South32 cut a deal with Trilogy that would provide the Australia-based major the opportunity to acquire a 50 percent interest in the Upper Kobuk Mineral Projects for US$150 million.

To keep this option in good standing, South32 is investing US$30 million on exploration, primarily focused on Bornite, over a three-year span.

Prior to South32 coming on-board, Trilogy Metals had already outlined some 2.7 billion lb of copper in an open-pit resource for Bornite averaging roughly 1 percent copper; and another 3.7 billion lb in a deeper underground resource that averages about 2.9 percent copper.

South32 invested its first US$10 million on a 2017 drill program that took wide step-outs from the known copper mineralization at Bornite with the goal of finding the edges of this massive deposit.

The seven deep holes drilled last year traced Bornite more than 700 meters northeast of the current resource and over widths of at least 1,000 meters but failed in the quest to find the edges of this world-class deposit.

Instead, the program provides ample evidence that it is much larger than the more than 6 billion pounds of copper outlined in the current resource there.

As exploration continues to expand the high-grade copper mineralization near the Bornite Camp, Trilogy Metals will work on a feasibility study for the Arctic VMS deposit in the mountains to the north.

"We have essentially doubled the size of the mineralized footprint with an overall Bornite system now measuring 1,500 meters by 2,500 meters," said Van Nieuwenhuyse.

South32 has budgeted another US$10 million for a 2018 program that will include both infill and continued resource expansion drilling.

In addition to taking long strides towards advancing the Arctic Mine project into permitting and progress on the Ambler Road, the US$28.7 million raised is enough to last Trilogy beyond the South32 option period.

The US$150 million payment from South32, if that company exercises the option, would go a long way towards Trilogy’s share of capital needed to develop Arctic, which would likely be the first mine in one of the richest undeveloped mining districts on Earth.