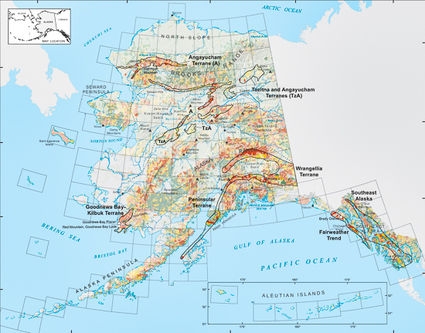 Prepared by USGS, in cooperation with Alaska DGGS, this map shows the potential for platinum group elements associated with mafic to ultramafic intrusive rocks in Alaska.

The six platinum group elements – platinum, palladium, rhodium, ruthenium, iridium, and osmium – are amongst the rarest metals on Earth. This scarcity, coupled with PGEs' uses in the automotive, petrochemical and electronics industries, has this group of metals firmly planted on the United States Geological Survey's critical minerals list.

"PGEs are indispensable to many industrial applications but are mined in only a few places," USGS inked in a 2017 report on platinum group elements. "The availability and accessibility of PGEs could be disrupted by economic, environmental, political, and social events."

Alaska is home to two historically significant PGE mines and is prime hunting grounds for future domestic sources of these rare metals.

Alaska is so prospective for PGEs that a category of deposits hosting these intriguing metals – Ural-Alaska-type ultramafic complexes – have been named after the state where they are found.

These PGE prospective deposits can be found along Wrangellia Composite Terrane - a series of associated assemblages that span a 1,250-mile-long arc sweeping from the Southeast Alaska Panhandle to Goodnews Bay along the southwest coast of the state.

The largest use for this suite of metals – especially palladium, platinum and rhodium – however, is as a catalyst to help scrub carbon monoxide, hydrocarbon, and nitrous oxide emissions from automobiles and petroleum refineries.

In addition to their industrial applications, the white color, strength, and resistance to tarnish of platinum alloys make them prized jewelry metals.

Furthering their role as precious metals, platinum, palladium, and rhodium are minted into coins and bars for investment purposes.

Platinum is currently selling for around US$930 per ounce; palladium is at about US$1,030/oz; and rhodium is fetching roughly US$1,930/oz.

With only one PGE mining operation in Montana, the United States relies on other countries – primarily South Africa and Russia – for roughly 90 percent of its new supply of this suite of precious industrial metals.

For an explorer seeking the extremely rare economically minable deposit of PGEs, a town by the name of Platinum seems to be a good place to start.

About 120 miles south of Bethel, Platinum is in the Goodnews Bay region of Southwest Alaska, an area that was the primary domestic source of platinum in the United States for about five decades.

Yup'ik residents of the area, Walter Smith and Henry Wuya, first discovered platinum in the streams draining Red Mountain in 1926.

This discovery led to a claim-staking rush followed by several small-scale mining operations. Eventually, Goodnews Bay Mining Co. consolidated the platinum producing claims in the area and operated a bucket-line dredge in the area from 1937 to 1978, accounting for most of the roughly 650,000 oz of platinum that has been mined from the streams in this area.

High PGM prices have sparked renewed interest in the Goodnews Bay placer deposits over the past decade. This interest has included using modern equipment and techniques to recover platinum left behind by the dredge.

In addition to additional PGMs remaining in the streams of this platinum-producing area of Southwest Alaska, USGS geologists believe there could be significant marine placer platinum deposits just offshore.

In addition to what might be found in the ocean downstream from this historical placer deposits in Goodnews Bay, there has been interest in finding the lode source upland from Salmon River and its platinum-bearing tributaries.

An Ural-Alaska-type ultramafic body is believed to be the lode source of this historical placer production.

Red Mountain is considered the likely source of the placer platinum deposits in the Goodnews Bay area.

Exploration at Last Chance, a prospect at the head of a platinum bearing creek draining Red Mountain, has turned up some promising results. Rock samples taken from an outcrop at Last Chance returned assay results up to 2.27 grams per metric ton platinum. Geologists have also discovered platinum- and palladium-enriched veins there.

As intriguing as the Goodnews Bay PGM potential is, other areas of Alaska are even more prospective, according to recent work completed by USGS and the Alaska Division of Geological & Geophysical Surveys.

While Goodnews Bay is known for its historic platinum production, the past producing Salt Chuck Mine on Prince of Wales Island in Southeast Alaska was a top palladium producer in the United States until being shuttered during World War II.

Though Salt Chuck was never put back into production after its wartime shutdown, a 7,000-meter-by-1,600-meter mafic-ultramafic igneous complex is prospective for the metals recovered at the bygone operation.

This site, however, has been on the U.S. Environmental Protection Agency Superfund list for the past several years.

Superfund – the informal name for the Comprehensive Environmental Response, Compensation and Liability Act (CERCLA) – is a federal program designed to fund the cleanup of contaminated sites.

In March of this year, EPA completed Superfund activities at Salt Chuck and is now seeking ideas to return the site to productive use through its Superfund Redevelopment Initiative.

One such prospect is Duke Island, located about 70 miles southeast of the historic palladium mine.

Group Ten Metals, the company that owns the Duke Island project, said the abundance of copper-nickel-PGE sulfide mineralization found there is unlike any known Ural-Alaska complex.

Of the four large zones of copper-nickel-PGE mineralization identified at Duke Island, only one, Marquis, has been drilled.

None of the 16 holes are thought to have been drilled deep enough to tap the contact with a feeder zone where the highest grades of mineralization at Duke Island is believed to occur.

Historical drilling at Brady Glacier outlined 100 million tons of rock averaging 0.5 percent nickel and 0.3 percent copper. Roughly 250,000 ounces of PGEs are estimated to be included in this drilled resource area.

Though Newmont officials deemed Brady Glacier the largest copper-nickel deposit in the United States during the company's investigation of the deposit in the 1970s, this PGM-enriched deposit is within the Glacier Bay National Park and Monument.

While this locale likely precludes any development in the foreseeable future, the rich deposit speaks to the PGE potential along the entire Southeast Alaska Panhandle.

From the Southeast Alaska Panhandle, the Wrangellia Terrane arcs through southwest Yukon and back into Southcentral Alaska, a stretch of this distinct geological body considered to be prime hunting ground for the suite of platinum metals.

The most advanced PGM deposit along the Wrangellia Terrane is Nickel Shäw (formerly known as Wellgreen) in the Yukon.

Nickel Creek Platinum Corp. (formerly Wellgreen Platinum) is currently working on the optimization of metallurgical recoveries ahead of an updated preliminary economic assessment for developing a mine at Nickel Shäw.

There are intriguing signs that similar PGM-nickel-copper-cobalt deposits could be lurking in the Alaska portion of the Wrangellia, such as the Man property about 165 miles southeast of Fairbanks.

With holes cutting 81 meters averaging 0.315 g/t platinum-palladium-gold, 0.17 percent copper and 0.25 percent nickel in the Eureka zone at Man indicate the great PGE potential of this property.

Pure Nickel, the former owner of Man, said that a review of drilling shows that all holes that cut the Eureka zone encountered disseminated sulfide mineralization with strikingly similar grades along seven kilometers (4.5 miles) in the central part of Alpha.

Despite the properties promise, Pure Nickel relinquished the state mining claims covering Man to save money during the recent downturn in mineral exploration markets.

A recent proposal to establish the Tangle Lakes Game Refuge on state land just south of the PGE-enriched areas at Man has discouraged further investigations of Man.

The PGE and nickel potential of this section of the Wrangellia Terrane stretching across Southcentral Alaska has attracted the attention of global miners such as Australia-based MMG Ltd.

In 2013 and 2014, MMG investigated three large blocks of state of Alaska mining claims that follow an arc south of the Alaska Range.

These claim groups include Amphitheater, which borders the Man property to the south and west; Butte Creek, located about 40 miles southwest of Amphitheater; and Talkeetna, a block of claims roughly 30 miles further along this PGE prospective arc.

The Peninsular Terrane, which stretches along the Chugiak Mountains in Southcentral Alaska, is a subsection of the Wrangellia Composite Terrane also known for its PGE potential.

Situated along the Richardson Highway about 75 highway miles north of the deep-water port city of Valdez, Genesis is an under-explored palladium-platinum-nickel-copper property with great infrastructure.

Sampling of one drill-ready reef style target at Sheep Hill on the Genesis property returned up to 2.4 grams per ton palladium, 2.4 g/t platinum, 0.96 percent nickel and 0.58 percent copper.

The property also hosts a separate style of chromite mineralization containing up to 2.5 g/t palladium and 2.8 g/t platinum.

Despite this surface PGE-copper-nickel mineralization, no drilling has ever been carried out on this project that is less than two miles from a paved highway and an electric transmission line.

New Age Metals Chairman and CEO Harry Barr told Mining News that this ease of access, superb infrastructure – along with the PGE-nickel-copper mineralization right at surface – makes Genesis the type of property that major mining companies are looking for.

New Age and its geological partner in Alaska, Avalon Development Corp., plan to compile the historical data on Genesis this year and based on the findings of this work complete the field work needed to get this intriguing PGE project ready for drilling.

"(A)fter the preliminary field work and additional ground proofing, our objective is to find an option-joint venture partner to further the development of this promising new drill ready project, with excellent base metal credits," said Barr.

In the meantime, New Age Metals is looking for other PGE properties in Alaska.

While the Wrangellia Composite Terrane is considered the best place in Alaska to hunt for platinum group metals, a number of prospects exist beyond this belt.

The Angayucham Terrane, a belt of rocks found along the northwestern slopes and south of the Brooks Range in Northwest Alaska is another area state and federal geologists consider to be highly prospective for PGMs.

Misheguk Mountain, a chromium occurrence about 45 miles east of the Red Dog Mine, is an Angayucham Terrane prospect with significant PGEs.

Assay values of 4.3 percent chromium and 0.22 percent nickel were obtained by the U.S. Bureau of Mines over a 50-foot sample reported in 1978. Individual samples collected from Misheguk Mountain returned up to 4.2 g/t platinum, 4.7 g/t palladium, as well as small amounts of rhodium, ruthenium, iridium, and osmium.

From the Seward Peninsula in western Alaska to the Fortymile district adjacent to the Yukon border, small amounts of placer platinum have been recovered as a by-product of gold mining. These anomalous occurrences underscore the potential of discovering PGMs across Alaska's vast gold-producing districts.

The Valdez Creek Mining District, about 65 miles southeast of Fairbanks, is one such region. According to a 1988 U.S. Bureau of Mines report, concentrates from 52 alluvial samples collected from placer gold streams in the district contained measurable quantities of PGMs.

No mafic or ultramafic rocks – the igneous rocks typical to Ural-Alaska-type ultramafic complexes – are known to exist in many of these areas where PGMs are found, opening up much of Alaska to new ideas of where to hunt for these rare and critical metals.

"What's intriguing is there are sniffs in a number of places. All it takes is for someone to come up with a model that makes sense, which could lead to a lot of exploration and/or discoveries," Dave Szumigala, a renowned Alaska geologist, told Mining News in 2012. "But, with the conventional models, these little hits here and there have not evoked an exploration target looking totally at platinum." 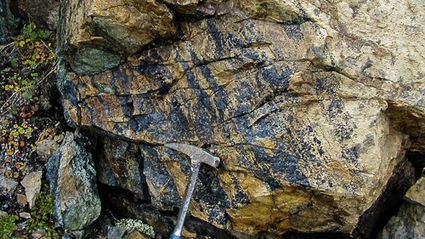 Already rich in Ural-Alaska-type ultramafic platinum group element targets, the potential of a new Alaska-type PGM complex could open up wider areas of the state for the search of this group of elusive industrial and critical minerals.