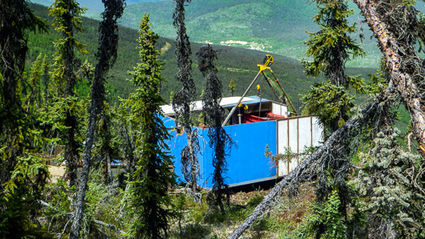 This first rig has drilled more than 5,050 meters so far this year on the Klondike District property near Dawson City, Yukon.

Klondike Gold Corp. Aug. 14 said it is expanding this year's drill program at its Klondike District property in the Yukon, including the addition of a second drill to test the Nugget zone.

The first drill continues to focus on expanding Lone Star gold, a sizeable lode gold zone that lies above the confluence of celebrated Bonanza and Eldorado Creeks.

The Lone Star drill program will continue to systematically test sections to outline the geometry, continuity, and extent of disseminated gold mineralization and gold-bearing quartz vein mineralization found there.

So far, this first rig has completed 5,050 meters of drilling this year and an additional 2,000 meters are planned this season.

A second rig, which will focus on testing the Nugget Zone, has been mobilized and is also expected to complete about 2,000 meters over the balance of the 2018 season.

When Klondike Gold initially drilled Nugget Zone, it was focused on gold-bearing quartz veins carrying higher grades over narrower intervals, such as one hole drilled in 2015 that cut 14.3 meters of 5.1 g/t gold there. The company has since recognized that gold is disseminated in the host rock adjacent to quartz veining. 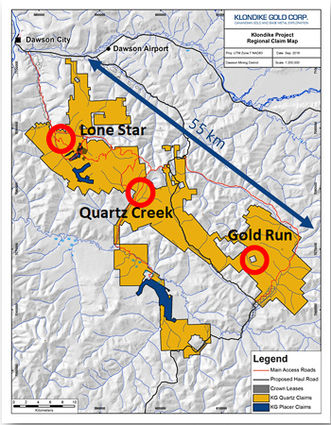 The objective of this year's drilling at Nugget Zone is to attempt to broadly outline the geometry, continuity, and extent of disseminated gold mineralization and gold-bearing quartz vein mineralization.

With positive results from its re-assessment of previous drilling, Klondike Gold has relogged 43 holes drilled in 2015 and 2016 – 37 from Nugget and six from Gay Gulch – and has submitted additional samples to be assayed for disseminated gold.

In addition to drilling and resampling, the company has completed a regional survey across the 527-square-kilometer (203 square miles) Klondike District property. This work included airborne geophysical surveys; soil sampling; structural and lithologic mapping; and prospecting.