From F-35 fighters to milk; a critical mineral we use everyday 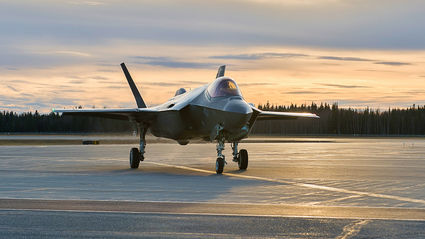 Alcoa won the contract to supply roughly US$1.1 billion worth of titanium for the U.S. military's F-35 Lightning II aircraft, such as this fighter at Eielson Airforce Base near Fairbanks, Alaska.

Titanium conjures images of the durable and lightweight metal used to build aircraft, replacement hips, high-end bicycle frames and even quality golf clubs. While its outstanding weight-to-strength ratio and corrosion resistance makes this critical metal ideal for these applications, roughly 93 percent of the world's titanium is used to impart a stark whiteness to many of the consumer goods we use every day.

"Titanium is different than most other metallic elements in that it is mined primarily to satisfy demands for a chemical product – titanium dioxide for pigment – rather than for the metal itself," the United States Geological Survey penned in a 2017 report on titanium.

Unlike many of the other 35 minerals and metals considered critical to the United States, no appreciable amounts of titanium have been mined in Alaska. There are, however, several places across the Far North state to look for this essential household and aerospace metal.

Titanium dioxide has three qualities that make it an ideal material for creating whiter whites in a surprisingly wide variety of products we use today – it is white, it is safe for human consumption and it has a very high refractive index, which means it scatters light extremely well.

"Titanium dioxide has properties of whiteness, opacity, and chemical inertness that make it especially suitable for use as pigment to impart a durable white color to paints, paper, plastic, sunscreen, toothpaste, and wallboard," the USGS inked in its titanium report.

Around 68 percent of the roughly 820,000 tons of titanium dioxide used in the United States in 2017 was added to paint. In fact, most high-quality white paints you buy in the hardware store today contain "titanium white" a pigment made from this highly reflective, white material.

Cosmetics, sunscreens, toothpaste and many other food products take advantage of the inert whitening, reflecting and opaque qualities titanium dioxide has to offer.

Because it is used in such a wide variety of products, the vast majority of us consume or use a product containing titanium dioxide every day.

While we typically don't think about titanium in our toothpaste or milk, many of us are much more familiar with its metallic form.

About 30 percent stronger than steel but only about half the weight, titanium metal is used a lot in high-performance sporting gear. Bicycle frames, golf clubs, tennis rackets and goalie masks are among such products that take advantage of this critical metal's weight-to-strength ratio.

The same properties titanium lends to sporting gear, coupled with the inertness that allows it to be added to milk, along with a superior corrosion resistance, makes it the metal of choice for prosthetics that go inside the body. Titanium hip and knee replacements are among the most well known of these medical uses.

"As the number one customer for titanium, the aerospace industry and the titanium industry are directly linked to each other economically," according to TMS Titanium, a leading supplier and distributor of titanium mill products in the United States.

When it comes to aircraft performance, the lighter the better.

While aluminum is about 60 percent lighter than titanium, it is only about half as strong, corrodes much easier and does not hold up to heat as well. Since it is equally as important not to break or melt down at 20,000 feet, titanium is the metal of choice for many aircraft parts.

For these reasons, the geological survey said there are no completely satisfactory substitutes for titanium.

In addition to being lightweight and strong on its own, titanium alloys with aluminum, iron, nickel, molybdenum, vanadium and other metals – which makes it ideal for a wide array of aircraft parts and military equipment.

The ability to withstand temperatures from subzero to above 1,100 degrees Fahrenheit, also makes titanium an increasingly useful metal for jet engine parts.

According to the USGS, an estimated 80 percent of titanium metal consumed in the U.S. during 2017 was used in aerospace applications; the balance was used in armor, chemical processing, marine hardware, medical implants, power generation, and consumer and other applications.

"Countries that have considerably large military budgets, like the United States, have a high demand for titanium and consider the availability of titanium a matter of national security," said TMS Titanium.

While titanium is the ninth most abundant element in the Earth's crust, for the most part it is too widely dispersed to be economically mined. There are a few titanium minerals, however, that contain higher concentrations of this element. About 90 percent of the world's titanium is found in one such mineral, ilmenite, made up of iron and titanium oxide.

About 100,000 tons of titanium mineral concentrates were produced in the United States last year. This production came from mining and tailings in Florida and Georgia.

This heavy reliance on imports, coupled with the broad applications – from toothpaste to stealth fighters – are the reasons titanium ranks among the 35 minerals the USGS currently considers critical to the economy and security of the United States.

The sparse quantities of titanium mined in the United States, however, belies the amount of resource found here.

Rich deposits of this critical mineral are found along the East Coast of the United States, a region known as the eastern North America titanium province. The deposits in this province extend from New York to the Gulf of Mexico, with the bulk of the resource in this highly populated region found in heavy-mineral concentrations in beach, bar, dune, and stream sands along the Atlantic and Gulf.

In total, about 111.9 million metric tons of titanium dioxide has been identified in 20 U.S. states.

Alaska is not among the 20 states that report a titanium resource but that could soon change. This is because Alaska Metal Health Trust, which was granted 1 million acres of land to earn money to provide mental health care in the state, is exploring titanium enriched beach sands along the Gulf of Alaska coast.

Located about 75 miles northwest of Yakutat, this potential resource being studied by the Alaska Mental Health Trust Lands Office is known as the Icy Cape Gold and Industrial Heavy Minerals project.

The mineral-rich beach sands found at Icy Cape were first discovered in 1899. At the time, though, the main interest was gold. Up until World War II, small hand operations along this stretch of beach, previously known as the Yakataga district, produced around 15,000 ounces of gold.

The iron and titanium oxide potential of these beach sands were first sampled by the U.S. Bureau of Mines in 1962.

The best of these samples contained 7.3 pounds of titanium per ton. Most, however, were less than two lb/t titanium.

In 1995, the Bureau of Mines revisited the beach sands. This work found the Yakataga beach sands contained ilmenite and rutile, both titanium minerals; and zircon, another mineral considered critical to the United States.

Since 2015, the Alaska Mental Health Trust has been systematically exploring this roughly 30-mile-long stretch of beach on the property now called Icy Cape. These programs have included high-resolution aeromagnetic geophysical surveys and drilling.

While a report detailing the results from this work has yet to be published, the Mental Heath Trust Lands Office has reported the mineral sands being investigated include garnets and platinum, in addition to the titanium, zircon and gold previously reported. This could provide an economically interesting mix of metals and minerals, three of which are on the current list of 35 minerals the USGS deemed critical to the United States.

In addition to investigating the heavy mineral sands on the now Icy Bay property, the Bureau of Mines also sampled the beaches in the immediate area of the town of Yakutat, which is 75 miles to the southeast.

After extensive sampling in 1962 and 1995, the Bureau of Mines calculated that a 14-mile stretch of beach at Yakutat hosts 57 million metric tons of sand averaging 3.4 percent ilmenite, zircon and rutile. This investigation also recognized the gold and platinum metals found in these beach sands but did not do enough analysis on these metals to estimate the concentration.

In total, the Bureau of Mines calculated that Icy Bay, Yakutat and Mount Fairweather host 450 million to 500 million metric tons of sand in modern shoreline deposits containing 0.5 to 3 percent valuable heavy minerals. This estimate does not include the garnets, which are used for abrasives and water filtration, platinum group metals or gold.

Beaches are not the only place you can find titanium in Alaska. Kemuk, a prospect in Southwest Alaska hosts what could be an enormous lode of this critical metal.

Humble Oil Company originally investigated this property for its iron potential, after identifying an extremely strong magnetic signature over a four-square-mile area there. This anomaly identified a large mafic and ultramafic – igneous rocks rich in magnesium and iron – body buried about 25 to 40 meters below the surface.

Humble drilled 16 holes into this iron- and titanium-rich body, some going as deep as 600 meters.

Based on this initial work, it was estimated that the Kemuk prospect hosted 2.4 billion tons of material averaging 15 to 17 percent iron, along with titanium and silicon.

A beneficiation test in the 1960s indicates the feasibility of producing a concentrate containing 65 percent iron, 2 to 3 percent titanium dioxide, and 2 to 3 percent silicon dioxide.

This project was revisited by Millrock Resources Inc. in 2010. The company, however, was less interested in the titanium and iron that the potentially even larger porphyry copper-deposit might represent.

Core from Humble's 1950s drilling – now stored at the Alaska Geological Materials Center in Anchorage – provided Millrock geologists with a peek at what lies below the surface at Kemuk.

The Millrock team postulated that Kemuk could be analogous to a similar igneous body lying next to the enormous Pebble porphyry copper-gold-molybdenum project about 100 miles to the east. 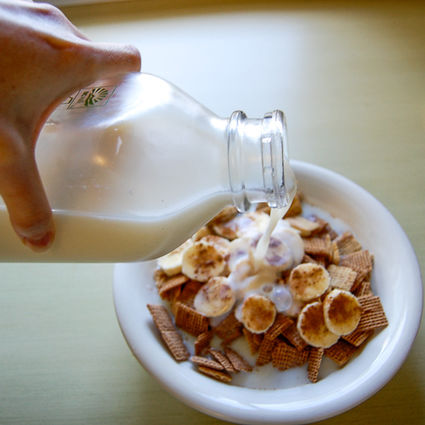 The whiteness and opacity of titanium dioxide provides this skim milk being poured over cereal with the creamy look of whole milk but without the fat.

Millrock Chief Exploration Officer Phil St. George was the first to recognize the porphyry potential at Pebble and is very familiar with the mineralization found there.

Staking a block of state mining claims covering Kemuk and the surrounding lands, Millrock began investigating the potential of this property it called Humble.

Kinross Gold Corp. funded a 2011 drill program carried out by Millrock to investigate a theory that a Pebble-like deposit lies next to Kemuk. Due to tough drilling conditions, however, this theory was not fully tested.

While it is unclear whether porphyry copper-gold deposit on the scale of Pebble is hidden near Kemuk, it is known that a large deposit of minerals already identified there could potentially be a domestic source of titanium and awaits further exploration.