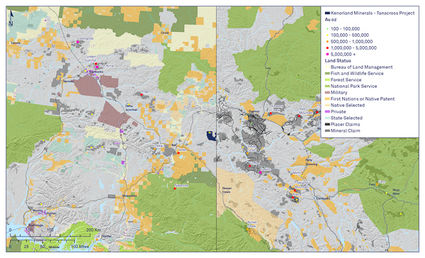 While exploration companies have staked large portions of the famed White Gold and Klondike districts in the Yukon, across the border in Alaska the lands remain largely unclaimed.

While claim staking and mineral exploration has rocketed in Yukon's famed White Gold and Klondike districts, this prolific action nearly comes to a halt at the territory's western border with Alaska. This has given rise to a tongue-in-cheek theory that there must be a major fault separating the mineral rich lands in western Yukon from the barren lands west of the border.

This "Border Fault" apparently does exist. It is not, however, a major geological structure separating Canada's westernmost territory from the northernmost of the United States. Instead, it is more of a socioeconomic divide between one of the top mining nations on the planet and a country that has done less to nurture its mining sector.

Flow-through financing available to companies exploring for minerals on the eastern side of the Alaska-Yukon Border Fault is one example of Canada's advantage.

The exploration company must spend the flow-through dollars raised on a qualifying mineral project in Canada within two years of closing the financing.

When you couple this incentive with an exchange rate that allows exploration funds to go further, it is hard for a Canada-based exploration company to make the jump across the border fault.

A couple of major developments, however, could spark new interest on the Alaska side of the Border Fault.

These developments come in the form of two of the world's largest mining companies – Freeport-McMoRan and Rio Tinto – quietly grabbing interests in copper-gold projects in Alaska's Tanacross region just across the border from Yukon's White Gold District.

Freeport-McMoRan has entered an agreement to option Tanacross – a porphyry copper-gold project that lies right against the Yukon border about 50 miles northeast of Tok, Alaska – from Kenorland Minerals, a privately held project generating explorer.

The porphyry potential of the Tanacross property has been known since 1970, when International Minerals and Chemicals Corp. identified copper-molybdenum-gold mineralization that led to the discovery of the Taurus porphyry deposit.

Over the ensuing decades, mapping, sampling and geophysics has demonstrated the 99,564-acre property now held by Kenorland has the potential to host a porphyry copper-gold deposit of the scale global miners are seeking.

"Geologically speaking, the property has the right ingredients to host a significant mineral deposit – it sits on the intersection of two major crustal structures, has a large geophysical and geochemical expression, and the mineralized intrusions are the right age," Kenorland Minerals President Zach Flood told Mining News.

One of the major crustal structures at Tanacross, the Big Creek Fault, is also a major feature for the world-class Casino porphyry deposit in the Yukon.

Like Casino, Tanacross is located at the intersection of a second major structure intersecting the Big Creek fault. Large deposits around the world tend to be found at these major intersections.

"The project is at the right stage to offer plenty of upside in terms of expanding known and discovering new mineralization – much of the historical drilling was quite shallow (less than 500 feet) and the grade that has been intersected in more recent drilling is significant and remains open," Flood told Mining News.

Kenorland, which acquired Taurus from Senator Minerals Inc. in 2015 and staked additional state claims, believes the deposit is indicative of the potential across the roughly 100,000-acre Tanacross property.

"The Taurus-Bluff area is a cluster of porphyry centers and dykes which has a lot of potential which we look forward to exploring, however, we wanted to see if there are any indications of other mineralized centers or systems on the rest of the property before focusing efforts on certain areas," he added.

The Kenorland Minerals president said that his team is fortunate to have fairly complete records of the exploration in areas immediately surrounding Taurus but the information becomes "quite fuzzy" as you venture away from the deposit.

Kenorland has set out to bring the bigger picture into focus.

"We've stepped back and approached it from a grassroots angle, systematically collecting basic geologic and geochemical information across the entire property. By doing that, we can potentially generate new target areas and prioritize existing ones," Flood said.

This systematic grassroots exploration has turned up intriguing geological, geochemical and geophysical similarities to the enormous Pebble porphyry deposit in Southwest Alaska.

While comparisons to the largest undeveloped copper-gold-molybdenum deposit on the planet might seem like hyperbole, the fact that Freeport-McMoRan, which owns one of the largest operating gold-copper mines on Earth, has entered into an option agreement at Tanacross gives some credence to this assessment.

"I think it shows the district deserves another shake," said Flood.

Freeport is not the only world-class miner giving the Tanacross region another shake in 2018. Kennecott Exploration, the exploration arm of Rio Tinto, has optioned the Oreo Mountain project about 10 miles southwest of the Tanacross property from another privately held explorer, Tubutulik Mining Company.

David Hedderly-Smith, owner of Tubutulik Mining, is as familiar with the geology on both sides of the Border Fault as anyone.

"The Tanacross quadrangle and the Yukon to the southeast host over a dozen porphyry copper targets that warrant work right now – I've worked in the area numerous field seasons for several companies and clients since my first season in Alaska (in 1971!)," Hedderly-Smith told Mining News.

Over this nearly five decades of exploration, Hedderly-Smith and his crews have collected well over 10,0000 soil samples from across this region and the geologist says nothing compares to the geochemical anomaly he has identified at Oreo Mountain.

"The Oreo Mountain prospect has a simply spectacular geochemical signature for a porphyry copper system in the Yukon-Tanana Uplands with soil samples running up to over 800 parts per million copper, 100 ppm molybdenum and two ppm silver," Hedderly-Smith penned in a report aimed at attracting a company to explore Oreo.

This strong geochemical signature is bolstered by an intriguing magnetic high geophysical anomaly.

Hedderly-Smith believes these signs point to the potential of a Casino-sized deposit at Oreo Mountain.

"Oreo Mountain is almost certainly another porphyry copper-molybdenum system in the Yukon-Tanana Uplands and very well could be another giant," he inked in his fact sheet for the property.

Typically, a project at this early stage would be explored a few years by a junior. If this investigation turned up a deposit with world-class potential, then a company like Rio Tinto would cut a deal to acquire all or part of the future mine project.

As a testament to the exploration potential of this raw project, Kennecott Exploration forewent this normal hierarchy and cut a deal to option Oreo Mountain from Tubutulik Mining.

"They are there because Oreo Mountain has the potential to host a significantly large copper-molybdenum-silver-gold porphyry system and is very close to Alaska's road system," Hedderly-Smith told Mining News.

In fact, Oreo Mountain is less than 20 miles north of the Alaska Highway and has a historical (RS2477) trail leading to the property, providing an established route to build a road to the property.

Interestingly, if you follow the winter trail another 10 miles further northeast you end up at Kenorland's Tanacross project.

According to reports received by Mining News, Kennecott completed reconnaissance exploration at Oreo Mountain in September.

It is not just the world's largest mining companies that have taken a renewed interest of the potential just west of the Border Fault. One Yukon-focused junior picked up property on the Alaska side of the socioeconomic divide.

Recognizing that mineral-rich geology is not bound by international borders, K2 Gold Corp. staked 123 mining claims along the Alaska side of the border about 25 miles south of Kenorland Minerals' Tanacross property.

Known as McArthur Creek, this new eastern Alaska project covers roughly 18,300 acres in the Moosehorn Range, a cross-border region that has produced more than 100,000 ounces of placer gold.

"While historical exploration has been concentrated on the Canadian portion of the range, the Alaskan side of the range has seen very little modern exploration," K2 Gold penned in it second quarter report.

With three gold projects in western Yukon – Wels, Storck and Ladue – K2 Gold is familiar with the geology of this stretch of the Tintina Gold Belt, a 125- by 750-mile gold-rich province that arcs from northern British Columbia, through the southwest corner of Yukon, and across Alaska.

"Exploration thus far on the Canadian side of the border seems to indicate that there is an extensive orogenic style mineralized gold system in the range. The McArthur Creek project represents a large, prospective district scale opportunity in an area that has seen limited exploration to date," said K2 Gold Vice President of Exploration Jo Price. 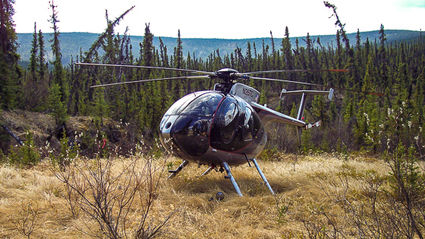 A helicopter finds an open place to land at Oreo Mountain during Tubutulik Mining's 2007 exploration of the gold- and copper-rich Tanacross quadrangle in eastern Alaska.

While K2 Gold only carried out early stage exploration at McArthur Creek this year, it is the first junior mining company exploring the Yukon to jump across the border.

"Alaska seems to be getting more attention in general, not just this area, but all of Alaska," he told Mining News. "There have been some big moves in the state recently, and probably more to come."