Pretium Resources Inc. Jan. 9 reported that it produced 376,012 ounces of gold at it Brucejack Mine during 2018, the first full calendar year of full production at this high-grade gold operation in northwestern British Columbia.

Commercial production commenced at the Brucejack Mine in July 2017, with ramp-up continuing into the first half of 2018 and steady-state production achieved in July.

While the mill outperformed its 2,700-metric-ton-per-day capacity during the first nine months of operation, the gold grades being fed into it were lower than expected. To rectify this, Pretium implemented a grade-control program to optimize stope shapes resulting in reduced dilution and optimized grade to the mill. This program has improved short-term grade prediction with drilling, sampling and local modelling.

"As we have discussed in the past, the high variability of the gold mineralization throughout the Valley of the Kings deposit is a key characteristic of the Brucejack Mine and gold production is managed with grade control, the sequence of the mine plan and the availability of stopes for optimal grade blending," said Pretium Resources President and CEO Joseph Ovsenek. "As we continue to generate significant cash flow, we will build on what we have learned mining the gold mineralization at the Valley of the Kings over the first six quarters of production to further refine our grade control program and mining methods in order to reduce dilution and optimize grade to the mill."

As a result of this work, mill grades improved from 9.1 grams per metric ton gold during the first quarter of 2018, to an average of 12.9 g/t gold for the balance of the year.

In December, Pretium received the provincial permits needed to increase the amount of ore fed into the mill at Brucejack to 3,800 metric tons per day, or roughly 40 percent.

Pretium estimates it will cost less than C$25 million to complete the minor mill upgrades needed to support the increased production. The company plans to minimize downtime by implementing these improvements during regularly scheduled maintenance shutdowns of the mill.

At the close of 2018, the company announced the closing of a US$480 million loan to refinance its existing construction credit facility. In conjunction with the closing of the loan, Pretium paid US$237 million to repurchase an 8 percent gold and silver stream sold as part of the financing package for the development of the Brucejack Mine. 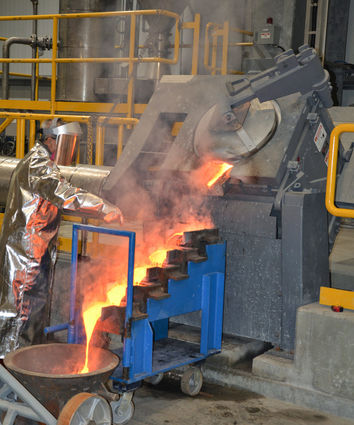 An average of roughly 1,030 oz of gold per day was poured into bars at Brucejack during 2018.

"We ended 2018 on a successful note with the closing of the bank debt facility, repurchase of our precious metals stream, payout of our construction credit facility, receipt of amended permits to increase production to 3,800 tonnes (metric tons) per day and production of over 376,000 ounces of gold, all in our first calendar year of production which included six months of ramp up," said Ovsenek. "Our successes can be attributed to the hard work of our team and the consistent profitability of the high-grade Brucejack Mine – the cornerstone of our plan to build Pretium as a tier one Canadian gold producer."

A specific timeline for ramp-up to the 3,800-metric-ton-per-day production rate; updated mineral resource and mineral reserve estimates; and production and cost guidance for 2019 are expected later in the first quarter.