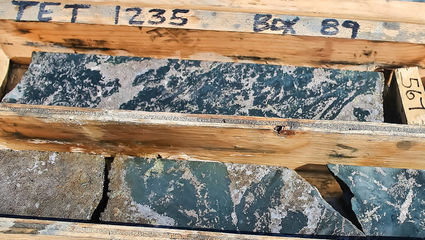 This core is from a 4.5-meter section of skarn mineralization drilled into the Main Peak Gold deposit in 2012 that averaged 68 g/t gold, 10 g/t silver and 0.36 percent copper.

Contango ORE Inc. Jan. 23 announced that the Peak Gold mine project near the crossroads town of Tok in Eastern Interior Alaska is officially up for sale.

The Peak Gold project is owned by a joint venture between Contango ORE (60 percent) and a subsidiary of Royal Gold Inc. (40 percent).

Royal Gold, which manages the work under the joint venture, has retained Scotia Capital Inc. to conduct a joint process for the sale of the Peak Gold properties in Alaska.

Given the high gold grades and robust economics calculated for developing a mine at this road-accessible project, the Peak Gold partners should not have any problems finding suitors, if they have not already identified the buyer.

A preliminary economic assessment published last October envisions an open-pit mine feeding a 3,500-metric-ton-per-day mill that is forecast to produce 1.09 million ounces of gold and 2 million oz of silver over an initial eight-year mine-life.

The after-tax net present value (at a 5 percent discount) of this operation is calculated to be US$393 million and the after-tax internal rate of return is 29.1 percent.

The cost to produce an ounce of gold, based on the initial capital investment, is calculated to be an exceptionally low US$428/oz of gold recovered. With the sustaining capital included, this cost is only US$470/oz gold.

While mining the Peak zones is intriguing, these high-grade skarn deposits represent only a fraction of the highly prospective land package held by the Peak Gold joint venture.

"The project considered in the PEA is a very small area of the consolidated land package of about 35,000 square kilometers (850,000 acres) we control in Tintina Gold Belt that runs through Alaska and the Yukon," Royal Gold President and CEO Tony Jensen informed shareholders late in 2018.

This larger land package is highly prospective for other skarn deposits similar to the Peak deposits; as well as porphyry or epithermal deposits containing gold, copper, silver, zinc and potentially other metals. 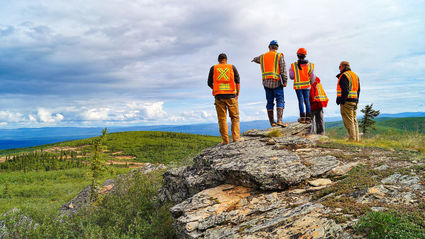 Avalon Development President Curt Freeman provides Royal Gold representatives a geological overview of the high-grade skarn mineralization found in the Peak Zones, which are among more than a dozen highly prospective targets that have been identified across the 850,000-acre Peak Gold property.

CORE's 60 percent interest in the Peak Gold project plus cash on hand, which was US$11.7 million at the end of September, constitute substantially all of the Texas-based mineral exploration company's assets. CORE has retained Petrie Partners, LLC and Cantor Fitzgerald and Co. to advise on its strategic options. The Peak Gold partner said it is primarily interested in a sale of CORE stock in exchange for cash or liquid publicly traded shares.

Royal Gold, which owns roughly 12.7 percent of Contango ORE's shares, said it is considering all alternatives with respect to its own investment in the Peak Gold joint venture.