Alaska mines down, US mines up; import reliance still an issue North of 60 Mining News – March 8, 2019 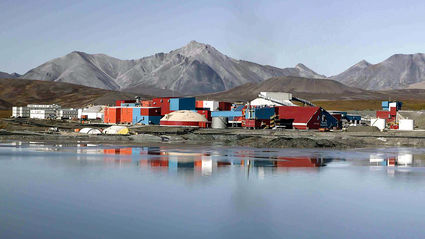 The Red Dog Mine in Northwest Alaska produced 1.29 million pounds of zinc, 217 million lb of lead, along with silver and germanium byproducts during 2018.

The value of non-fuel metals produced in Alaska and the United States during 2018 were similar to 2017, according to Mineral Commodity Summaries 2019, an annual report published by the U.S. Geological Survey.

Alaska mines produced roughly $3.44 billion worth of non-fuel minerals last year, down nearly 3 percent from the US$3.53 million in 2017. This slight drop is largely due to lower output from the two largest mines in the state – Fort Knox and Pogo.

The roughly 1.4 billion pounds of zinc produced at the Red Dog and Greens Creek mines accounted for more than half of Alaska's mineral value in 2018. The roughly 750,000 oz of gold produced at Fort Knox, Pogo, Kensington, Greens Creek and dozens of placer gold mines across the state accounted for roughly another 25 percent. Silver and lead account for most of the balance.

Nevada, the top mining state in the nation, produced US$7.88 billion worth of non-fuel minerals in 2018. This output was dominated by gold and copper.

Roughly $82.2 billion of non-fuel minerals was produced in the United States during 2018, a roughly 3 percent increase over 2017

"Industries – such as steel, aerospace and electronics – processed nonfuel mineral materials and created an estimated $3.02 trillion in value-added products in 2018, which is a 6 percent increase over 2017," said Steven Fortier, director, USGS National Minerals Information Center.

USGS continues to highlight America's dependence on foreign countries for many minerals vital to manufacturing and defense.

According to this year's report, the United States continues to rely on foreign sources for some raw and processed mineral materials. In 2018, imports made up more than half of U.S apparent consumption for 48 nonfuel mineral commodities, and the U.S. was 100 percent net import reliant for 18 of those.

According to the data compiled by USGS, China continues to be the largest supplier of these mineral commodities to the U.S., followed by Canada.

While the number of mineral commodities on which the U.S. is 100 percent reliant is down from 20 a year earlier, it still poses a risk as countries vie for many of the materials needed for green energy, high-tech and military devices.

Sen. Murkowski, who chairs the Senate Energy and Natural Resources Committee, said Congress needs to help the White House to find ways to increase domestic production of the minerals currently being sourced elsewhere.

The actions taken by the Trump Administration include an executive order that outlines a strategy to bolster domestic supplies of minerals and metals critical to the economic and strategic security of the United States.

Following this order, USGS put together a list of 35 critical minerals, metals and element groups. This list ranges from widely known metals such as cobalt and graphite, to the more exotic elements like vanadium, germanium and rare earth elements.

Alaska has known occurrences of 30 of USGS' list of critical minerals, metals and element groups - according to information compiled by North of 60 Mining News. These include past producing mines, current production and potential future sources of these critical minerals. 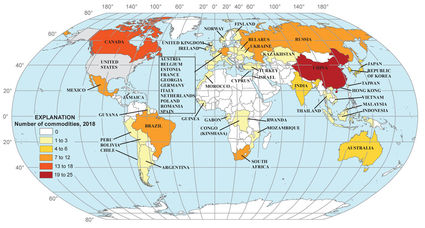 Of the 14 critical minerals that the U.S. is 100 percent import-reliant, at least 12 – arsenic, fluorspar, gallium, graphite, indium, manganese, niobium, rare earths, rubidium, scandium, tantalum, and vanadium – have been identified in deposits and occurrences across Alaska.

Going beyond critical minerals, USGS' Mineral Commodity Summaries is the earliest comprehensive source of information on more than 90 mineral commodities that are important to the U.S. economy and national security.

"The Mineral Commodity Summaries provide crucial, unbiased statistics that decision-makers and policy-makers in both the private and public sectors rely on to make business decisions and national policy," said Fortier.

The full report is available for viewing and download at https://minerals.usgs.gov/minerals/pubs/mcs/2019/mcs2019.pdf

CORRECTION: The value of minerals produced in the United States was corrected to $82.2 billion. The previous version incorrectly stated the value at $82.2 million.