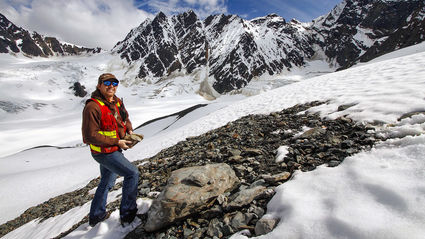 Constantine Metal Vice President of Exploration Darwin Green examines an outcrop of barite-sulfide boulders rich in zinc and copper at Mount Henry Clay, one of several VMS prospects on the company's Palmer property near Haines, Alaska.

While not the flashiest of the 35 minerals on the United States Geological Survey's critical list, barite plays an essential role in America's energy sector.

Barite derives its name from barús, the Ancient Greek word for heavy, owing to an exceptionally high specific gravity for a non-metallic mineral. It is this weight that makes barite a key element to the oil and gas sector and lands the mineral on USGS' critical list.

"More than 90 percent of the barite sold in the United States was used as a weighting agent in fluids used in the drilling of oil and natural gas wells," USGS penned in its annual report, Mineral Commodity Summaries 2018.

While the U.S. Geological Survey withheld information on domestic barite production in 2018, it is estimated that about 86 percent of the roughly 3 million metric tons of barite used in the United States last year was imported.

Constantine Metal Resources Ltd. would like to shift this balance by producing a high-quality barite at Palmer, an advanced staged exploration project in Southeast Alaska that is better known for the zinc, copper, silver and gold also found there.

China, which currently produces more than a third of the world's supply of barite, supplied roughly 63 percent of this critical mineral shipped to the United States during 2018. The balance was supplied from India, Mexico and Morocco.

The mineral also lends its weight to mud flaps, which helps to keep them from "sailing" when the trucks and other vehicles they are mounted to are traveling down the highway.

While most of barite's industrial uses take advantage of its weight, its ability to significantly blocks x-ray and gamma-ray emissions adds another layer of uses for this critical mineral.

Being advanced by a joint venture between Constantine Metal Resources (51 percent) and Dowa Metals & Mining Co. Ltd. (49 percent), the Palmer project is better known for the base and precious metals also found there.

"Barite constitutes about a quarter of the rock mass of the defined mineralized zones and ... has the potential to materially enhance the value of the already high-value mineralization," said Constantine President and CEO Garfield MacVeigh.

This work demonstrates that 91.1 percent of the barite at Palmer can be recovered in a clean high-grade concentrate with a specific gravity of 4.44.

American Petroleum Institute, a trade association that establishes and maintains standards for the global oil and gas sector, prefers a 4.2 specific gravity for barite used in oil and gas drilling. Due to few deposits in the United States able to produce this heavy a barite, API lowered this minimum specific gravity requirement for barite to 4.1 in 2010.

Contaminants in barite can cause problems while drilling, especially abrasive particles that can ruin bits.

In addition to a specific gravity well above requirements, Constantine reports that the testing shows that a barite concentrate from Palmer meets all API and U.S. Environmental Protection Agency specifications for oilfield drilling grade barite, including particle size and purity, and appears to be a market-ready product.

With the metallurgical results showing quality barite can be recovered from Palmer, Constantine has commissioned experts in the market to assess wholesale barite prices for different North American oil basin markets.

Preliminary estimates completed in 2018 identified a range from US$170 per short ton to US$225 per short ton.

The market analysis being done for Constantine will also include an analysis of transportation options and cost to access the most likely of these markets.

Palmer's proximity to the Pacific Rim deep-water port at Haines, is expected to have a significant competitive advantage to delivering barite in North America.

Alaska, with its oil and gas fields on the North Slope and in Cook Inlet, would be a good market for Palmer barite.

On top of its locational advantage, the barite at Palmer would also benefit from being produced as a co-product of the copper, zinc, lead and precious metals also found there.

Much of the barite found in the deposit would be extracted with the ore at a future Palmer Mine and then need to be stored as either waste rock or tailings. By adding the extra step of producing a saleable barite product, Constantine and Dowa could get paid for this critical mineral that is already being handled.

"This may have very positive implications with the potential to both enrich gross metal value per tonne (metric ton) and provide significant environmental and operational benefits by reducing waste," said MacVeigh.

Anarraaq consists of a barite body, estimated to be as much as 1 billion metric tons, and an 18 metric ton zone of massive sulfide with 19.4 million metric tons of inferred resource averaging 14.42 percent zinc and 4.2 percent lead.

While an NI 43-101-compliant resource estimate has yet to be reported for this deposit, the widely spaced holes drilled prior to 2017 suggest this exploration target has somewhere between 80 million and 150 million metric tons of material averaging around 13 percent zinc and 4 percent lead.

Though the seasonality of the Arctic port that currently delivers zinc and lead concentrates from Red Dog would currently restrict shipments of barite from the district, this regions proximity to the west end of Alaska's oil-rich North Slope provides interesting market potential for the massive deposits of barite found in this minerals-rich corner of Northwest Alaska.

In fact, the southwest corner of the National Petroleum Reserve-Alaska, a 23.6-million-acre oil-rich region of the North Slope is only about 30 miles northeast of Red Dog.