No viable substitute for critical chromium

Stainless-steel ingredient mined in Alaska during both World Wars 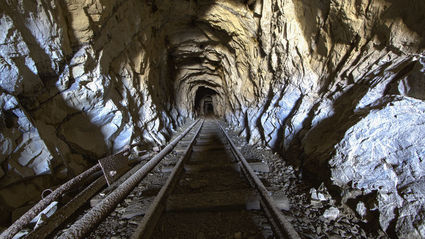 Sunlight reflecting off snow outside the portal lights up the underground workings at Chrome Queen, a Southcentral Alaska mine that provided the United States with a domestic supply of chromium during World War II.

A vital ingredient in stainless steel and superalloys, chromium is considered by the United States Geological Survey as "one of the nation's most important strategic and critical materials."

Rich chromite deposits on Alaska's Kenai Peninsula were able to ease some of these concerns by providing a domestic supply of chromite, the only mineral of chromium metal, to help fill America's increased demand for chromium during both World Wars.

Alaska is second only to Montana when it comes to the best states to explore for future domestic needs of this important strategic and critical mineral.

Best known for being the primary ingredient of the smooth, mirrorlike plating on automobiles, chromium is a highly prized alloy due to the hardness and corrosion resistance it lends to other metals.

By far the largest use of chromium is in stainless steels, which typically contain 10.5 to 32 percent of this critical alloying metal.

While shiny bumpers, hubcaps and tailpipes are obvious applications of chromium's properties, yellow school buses and stripes down the center of American highways are lesser known yet highly recognizable uses of this element's pigment properties.

Roughly 85 percent of the world's chromium is used for stainless steel and chrome plating, and the metal has no equal when it comes to the anti-corrosive and hardness qualities.

While the U.S. consumes roughly 6 percent of the world's chromite ore production, none of this chromium mineral is mined domestically. Instead, America relies on foreign sources for approximately 71 percent of its supply of chromium, the balance comes from the domestic recycling of stainless steel.

The U.S., which is not among the "other countries" that produced chromite, consumed roughly 550,000 tons of chromium, worth an estimated US$1.1 billion during 2018.

Domestic recycling supplied about 160,000 tons of this chromium. The balance was imported as chromite, refined chromium and chromium-containing scrap.

South Africa accounted for roughly 38 percent of the chromite and refined chromium metal imported into the United States last year. Kazakhstan (8 percent) and Russia (6 percent) were other suppliers of chromium.

"The price of ferrochromium reached historically high levels in 2008 and then declined in 2009 with a weakening world economy. During the same time period, China's role as a chromium consumer has grown with its expanding stainless-steel industry," USGS penned in its chromium report.

Looking around the United States for domestic sources of chromium, the USGS investigated both known types of chromite deposits – stratiform (layered) deposits such as the rich deposits mined in South Africa and podiform (pod shaped) deposits that developed in oceanic crust below the sea floor and have been pushed up by tectonic forces.

It is the podiform variety found around Red Mountain – situated near the southern end of the Kenai Peninsula in Southcentral Alaska – which provided the U.S. with a domestic supply of chromium during World Wars I and II.

In total, about 26,000 tons of ore containing 38 to 43 percent chromium oxide was produced from Red Mountain from 1942 to 1958, and about 1.6 million tons of ore is estimated to remain in deposits historically investigated there.

Roughly 2,000 tons of ore was mined from the tidewater deposits at Claim Point and results of drilling and surface sampling indicate 295,000 tons of 17.8 percent chromium oxide ore remain at this area on the southern tip of the Kenai Peninsula.

Together, roughly 27,800 tons of ore averaging 42 percent chromium oxide, having a chromium-to-iron ratio of 2.75-to-1 was mined from the chromite deposits at Red Mountain and Claim Point.

While Red Mountain and Claim Point are the best-known chromite deposit areas in Alaska, they are far from the only ones found here. In fact, an investigation carried out by the U.S. Bureau of Mines in the early 1980s identified 94 podiform chromite deposits along a 600-mile stretch of the Border Ranges Fault that arcs 600 miles southwest from McCarthy to the southwestern tip of Kodiak Island.

Excluding all deposits more than 10 miles from tidewater or existing roads and ones containing low-quality chromite, 41 hardrock deposits identified along Alaska's Border Ranges Fault during the BOM study are estimated to host 2.2 million tons of chromium oxide. 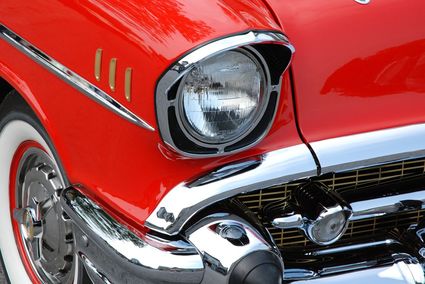 Shiny bumpers, hubcaps and tailpipes are the most recognizable applications of chromium's properties.