Dust on the beach at Nome creates Rush 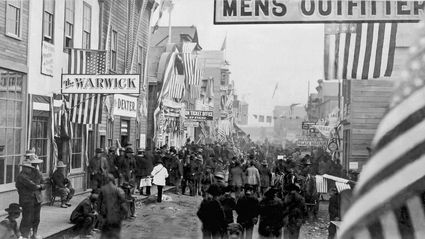 The Dexter Saloon on the left of Front Street in Nome was owned by Wyatt Earp and his partner Charles Hoxie. Built in 1899, Dexter was the city's first two story wooden building and most luxurious saloon in the booming mining town.

Alaska, the Last Frontier, it is home to some of the most influential pioneering and mining discoveries in history. A rich wilderness still rife with unexplored and untapped potential. It is here we will delve into one of the most peculiar and interesting settlements and learn just how it came to be.

At the southern part of the Seward Peninsula, the bulbous landmass sticking out on the left side of Alaska, lies the town of Nome.

For thousands of years before the introduction of Western culture the lands around Nome were the hunting grounds of the First Nations People, the Inupiat. This was an area where subsistence and heritage was upheld and unchanged since pre-historic times. There is even evidence that an Inupiat settlement, Sitnasuak, existed where Nome lies today.

Nome has a rich history speckled over the last century, from its founding to its influence during World War II there are even elements of popular culture that has connected Nome to the world today.

So, let's start at the beginning, how did Nome come to be?

The name Nome is something to this day that is greatly debated. Some say it was a typographical error from a British cartographer who copied an ambiguous annotation on a nautical chart.

During a voyage up the Bering Strait a British naval officer had written "? Name" next to the unnamed cape. The mapmaker misread the annotations as "C. Nome" or Cape Nome and that name was used on the chart.

Another theory is that it could potentially come from a misunderstanding of an Inupiaq word, Naami, meaning "Where at?"

Lastly it could have been named by Nome's co-founder, Jafet Lindeberg, a Norwegian immigrant. Nome appears as a toponym in several places in Norway. A toponym being a place named after a topographical feature of the land.

However further research found that Lindeberg had actually chosen the name as Anvil City as a toponym for a large anvil shaped rock above the discovered claim.

Before the name Nome was chosen the settlement was firstly named Anvil City. It wasn't until a committee held on Sept. 13th, 1899 that the designation of the camp was then changed to Nome.

Whatever the case may be, Nome became and Nome remains.

It all began on Sept. 20, 1898, when three men, later coined as the "Three Lucky Swedes," discovered rich deposits of alluvial gold on Anvil Creek, a tributary of the Snake River near Cape Nome.

The magnitude of the strike and the ease with which the coastal gold fields could be reached from the states by sea, would, within two years, give rise to the largest city in the territory and almost double the population of Alaska.

To understand just how this many people travelled thousands of miles to reach such a remote and uncharted area we have to go back to the last days of the Klondike.

Previously, in Before the Klondike there was Forty Mile, I laid out the first "Discovery" that triggered a phenomena that rippled throughout North America and even into countries all over the world.

As the days of Forty Mile dwindled the clamor for gold continued and tens of thousands of fortune seekers followed the money. Thus, was born the Klondike Gold Rush.

Hence from Forty Mile came the birth of Dawson City and yet in three short years it too dwindled. In 1899 the incredible population of Dawson City had gone from a monumental 40,000 to 8,000 in a year.

Thousands of disappointed stampeders were still living in Dawson in the summer of 1899. Some were eking out a living working for established mines, others struggled to make a living doing odd jobs in Dawson. Their dreams of golden wealth dashed, most were either too poor or too ashamed to return home.

The Anvil Creek strike was good, but it probably would not have outshone the Klondike gold fields, except that it led to an amazing discovery. Many of the stampeders who arrived too late to stake claims along the mouth of the Snake River set up tents on the beach, where they saw an astonishing sight. There was gold on the beach. Miners swarming over the strike termed it a "poor man's paradise."

For the average prospector, the beaches had distinct advantages over the Klondike gold fields. They could be reached easily by ship travel, did not have to haul 2,000 pounds of goods over narrow snowy mountain passes, and most importantly, because the beach could not be staked, claims were open to everyone.

All these men and women needed were shovels, buckets and a rocker to separate gold from sand. Stampeders from all over the United States joined those from Dawson and the rush was on again.

Prospectors set about staking claims along Anvil and several other tributaries of the Snake River. By the end of 1899, Nome had a population of 10,000.

As word of the gold reached the outside world, thousands of people poured into Nome during the spring of 1900, even aboard steamships from the ports of Seattle and San Francisco. A tent city on the beaches and on the treeless coast stretched for 30 miles (48 km), from Cape Rodney to Cape Nome. In June of that year, Nome averaged 1,000 new fortune seekers daily.

Even the early winter arrivals in 1899 found that most of the immediate region had been staked, and ugly disputes over claims burst into a threat of violence by mid-summer.

An attempt was made at a miners' meeting at a local saloon to have all the claims staked up to that time invalidated to permit a general re-staking of the creeks.

The anger of the American miners assumed a patriotic guise, as they alleged that staking of many of the first claims, including the discovery ground, by aliens was illegal. Second Lieutenant Oliver L. Spaulding, Jr., commanding officer of the army troops detailed to the area, averted mob action by clearing the saloon and ordering that original locators would work their claims.

Discovery of gold on the beach created a respite, although Nome was to see violence, litigation and scandal in high places regarding ownership of mining claims within the first two years of its robust life.

Meanwhile, the disgruntled miners rushed to the beaches, and within the next two months 2,000 men took out more than $1 million in fine gold dust from the black ruby sands.

Many late-comers tried to "jump" the original claims by filing mining claims covering the same ground. The federal judge for the area ruled the original claims valid, but some of the claim jumpers agreed to share their invalid claims with influential Washington politicians.

Alexander McKenzie took an interest in the gold rush and secured the appointment of Arthur Noyes as the federal district judge for the Nome region for the purpose of taking control of gold placer mines in Nome. McKenzie seized mining claims with an unlawfully procured receivership granted by Judge Noyes. McKenzie's claim-jumping scheme was eventually stopped by the federal Ninth Circuit Court of Appeals.

The following 10 years would not be kind to Nome and would continually chip away at the residents who now called Nome home. With a population reaching almost 20,000 people by 1909, Nome was the highest populated city in Alaska.

It had become a military outpost during World War II and was the last stop on the ferry system for planes flying from the United States to the Soviet Union for the lend-lease program. The former Marks Military Air Force Base is now the current Nome Airport.

Gold mining is still a major source of employment and revenue for Nome presently. Mining's contribution to the town was estimated at $6 million dollars a year in 1990.

Now you can find most modern amenities there. Airport and seaport, television and radio, schools and even higher education facilities from the University of Fairbanks.

Due to the attempts of McKenzie it provided the plot for a best-selling novel The Spoilers (1906), which was made into a stage play, then five times into movies, including two versions starring John Wayne: The Spoilers (1942 film) (co-starring Marlene Dietrich) and North to Alaska (1960, the theme of which mentions Nome.)

Wyatt Earp, of Tombstone, Arizona fame, stayed in Nome for a while. In September 1899, Earp and partner Charles E. Hoxie built the Dexter Saloon, the city's first two-story wooden building and its largest and most luxurious saloon out of more than 60 saloons that sprung up in the gold rush town.

Nome is also famously known for the serum run of Balto the dog, in what would become known as the Great Race of Mercy. In 1925, dog sled driver Gunnar Kaasan transported diphtheria serum through harsh conditions with his lead dog Balto. A statue of Balto resides in Central Park, New York.

And in 1973, Nome would become the final destination for the Last Great Race on Earth, known as the Iditarod to Alaskans. It is now an annual tradition that uses the latter half of the serum run as a trail with a manned team of dogs travailing 938 miles (1,510 kilometers). 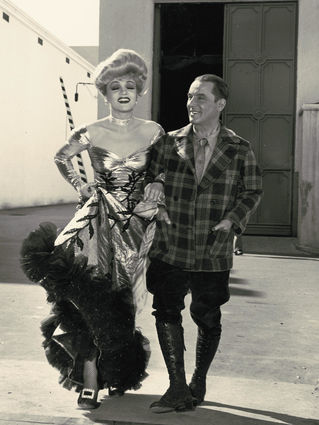 Actress Marlene Dietrich and renowned Yukon bard Robert Service on the set of Spoilers, a 1942 movie about the Nome Gold Rush.

The enormous influence of a remote Alaska mining town seems peculiar but that is just the enormity with which the words "gold rush" incite in people. It is a kind of similar romance to medieval or western times.

The pioneering era was brief as we quickly transitioned into the Industrial Revolution, but it can be imagined the effect the gold brought towards that development.

Without the resources discovered, would things have been the same?

Mining has played such an integral part to our culture. Our daily lives are founded upon and continually built on by the resources that are painstakingly collected. As we move on to greener technologies we may find less and less reliance on certain industries but mining will continue to be around for as long as there is earth to dig.