The hope of a nation within Tin City 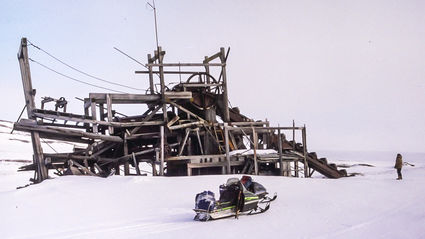 This dredge is a reminder of the early 20th century placer tin mining carried out in the Lost River area near Tin City, Alaska.

In the westernmost reaches of Alaska lies "Tin City," a mining settlement that all but disappeared except for a lonely radar station looking out over our seas and skies today.

Located on the Seward Peninsula's Bering Sea coast, about 90 miles northwest of Nome and five miles southeast of Cape Prince of Wales, Tin City was founded with aspirations as simple and as grand as the name had hoped for it.

An all but forgotten camp that had implications far larger than it probably ever intended and provided a strategic location years after its development to protect the United States from the Soviet Union during the Cold War.

This is a brief look into Tin City, a place yet to fulfill its potential and become the mining town it was meant to be.

In 1900, the US Geological Survey verified the discovery of tin at the western extremities of the Seward Peninsula. W.C.J. Bartels is credited with discovering an Alaskan tin lode in 1902 and so established a tin mining company in 1903.

But before delving further into what became of Bartels and his eventual Tin City, some light must be shed on global tin markets of the time to show just how important a tin discovery on American soil was.

During the 19th century, Great Britain controlled most of the world's tin output from Cornwall and Malaya. They held a near monopoly on the production of tinplate.

American industries were dependent on tin for a wide variety of purposes, such as tinplate, alloys, solders, foil, collapsible tubes and chemicals involving tin itself.

The U.S. lacked the tin, mines and smelting facilities to turn ore to metal as well as tin mills necessary to supply its voracious industries with tinplate.

It might not be considered so now but tin was as much an important political piece on the world stage that America was aspiring to step on at the dawn of the 20th century as it was a valuable mineral resource.

There was such a large push for self-sufficient tin that it had become a fervent dream to break away from the dependence on British imports.

A piece written during the height for "American tin" summarize that passion.

"For a long time, the mining of tin and manufacturing of tin plate have been the only industries for which the American people have been subservient to foreign nations... Our new declaration of industrial independence has been furnished-is final and complete; it is commensurate in importance to the great political declaration of 1776," D.H. Nourse penned in 1891.

Faced with a strong demand and certain political support, prospectors combed the U.S. for tin and by 1905 this strategic metal was found in no less than 17 different states, from Alabama to Wyoming.

However, there were several fiascos involving this highly sought-after metal. Companies met with litigations, shafts were dug deep only to find it disappeared further down and eventually erroneous claims made by hopefuls led to all but shallow concentrations.

As American imports of tin exceeded 30,000 tons in 1900, the pressure was on for a new kind of rush. This time, one backed by nationalism.

In the midst of this push for American tin, Bartels makes his Alaskan discovery and makes a push to establish in the U.S. territory.

In October 1903 Bartels set out for New York from Nome with a claim of having found tin ore worth at least $100 million in sight. (More than a kingly sum in that time as that would equate to over $3 billion today.)

Hoping to gather up the machinery needed to mine this immense lode he sought a smelter large enough to handle the workload of several thousand tons.

He had first intended to build a five-stack smelter, together with stamp mills and a concentrator, hoping for an output of fifty tons of refined tin daily.

Great quantities of smelting and mining machinery were purchased as well as large cargoes of anthracite coal to have it shipped from New York around Cape Horn to Dutch Harbor, to be stored until the ice on the Bering Sea broke.

According to the New York Times of 1903, Bartels had plans to build a large windmill to generate the power needed to operate the tramways and electric drills for such a colossal operation.

Samples brought back were believed to contain traces of uranium and tungsten and so an investment of $500,000 (nearly $15 million today) was put into Bartels Tin Mining Company.

Imaginations roamed freely in the Alaskan "wonderland of wealth," with tin mines described as possibly the most productive and profitable in the world.

There was even a humorous slogan regarding the potential tin as, "enough tin to can the earth."

So, we come to a few scattered huts and a post office that expectantly bore the name Tin City established at the base of Cape Mountain in 1903.

By 1907, two companies operated out of the village and a 10-stamp mill was located there.

During its production up until 1914 roughly 536 tons of metallic tin had been mined, most coming from dredges installed only three years prior that were recovering placer tin from the streams. There was no mention of smelting being done in Tin City, however, another source stated that the output, being far from the promise of canning the Earth, was shipped abroad, first to Swansea and then to Singapore.

The U.S. remained as dependent as ever on imported tin on the eve of World War I.

It is strange to find that while the claims were patented, after a short few years they were all but shut down.

Tin City, bearing the hope of American industrial independence was all but forgotten and the efforts of Bartels fell into obscurity.

As countless stampeders had spread throughout Alaska and Canada following the metal madness, World War I drained America of probably its most valuable of resources, people. As the war escalated and moved from I to II not much else happened for many decades in Tin City.

It was not strategic metal but strategic location that put Tin City back on the map.

In September 1950 the U.S. government began construction of the Tin City Air Force Station, previously named the Cape Prince of Wales AFS. Situated on the westernmost tip of the Seward Peninsula, as well as the most westerly point of land on the entirety of the North American continent, this facility was built to provide an early warning system of potential attack by the Soviet Union.

The Army Transportation Corps was tasked with the project, with the code name of Mona Lisa. Transport of the supplies and equipment was a task in itself as the only method of sending such a large bulk was by barge or Navy Landing Ship, Tanks (LSTs).

All this while the Bering Sea was not completely frozen.

Further still, once the supplies were landed, a road needed to be built to transport them the three miles to the proposed construction site.

After nearly three years, Tin City AFS was completed and would operate through arduous and highly inhospitable conditions until it would be decommissioned in 1979.

The stranded station changed hands and was upgraded as time continued onwards, until finally it was redesigned to a Long Range Radar Site. Maintained only by a minimum of personnel.

As part of "Operation Clean Sweep," initiated by Pacific Air Forces in 1998, abandoned Cold War stations in Alaska were remediated and the land was restored to its previous state. Years of neglect had caused the facilities to lose any value they might have had when they were closed.

Today very little of the former Tin City AFS remains. Controlled by Air and Space Operations based at Elmendorf the site is maintained by a civilian contract group called ARCTEC Alaska Inc. They access the site by a former support airstrip, now known as the Tin City LRRS Airport and provide maintenance and support when needed, to the radar system.

So, wait ... that's it? What became of the potential tin lodes of Alaska and the promise of industrial independence they offered?

They most likely remain, untapped and waiting to be cracked open for any willing explorer.

Tin is listed by the United States Geological Survey as a critical mineral. Meaning it is necessary for the defense and economy of American interests. These minerals or metals can change depending on the need strategically, on whatever factors that entails, or the surplus or deficit of said material.

Most commonly thought of as the main ingredient in tin foil and bean cans, what possible strategic use could tin possibly have? 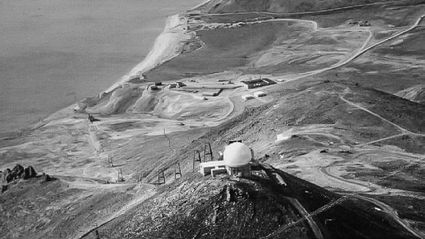 Looking down on Tin City Air Force Station, a facility built in the 1950s to provide an early warning of potential attack by the Soviet Union.

While you might not know it, tin is used almost entirely in the creation of alloys. A blending of metals that produce different materials. One of the most historically important alloys you've likely heard of, bronze. It even has an entire historical period named for its influence on civilization.

Today, tin is still used in bronze but is also an increasingly important ingredient of high-tech materials like indium-tin oxide, a protective coating on almost every flat panel display made. You know, your phone's touch screen?

It is due to its high versatility that it ever remains a much needed and never satisfied metal.

Bartels with his Bartels Tin Mining Company was possibly on to something. It seems regretful that such a potential for industrial independence was lost and Tin City was something more akin to Tin Camp.

Who knows? Maybe someone may just come across this story as Bartels had in his time and finish what he started, establishing a true Tin City at the western edge of North America.