Over a century of mining in Dublin Gulch

A 125-year saga of sourdoughs seeking gold at the northern edge of Canada's frontier; the rise of Yukon's largest gold mine North of 60 Mining News – July 31, 2020 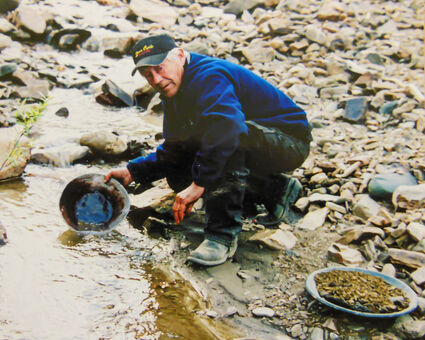 Ted Takacs, a longtime placer miner in the Dublin Gulch area, pans for gold during his elder years.

From sourdoughs dipping pans into creeks at the northern edge of the frontier to enormous haul trucks dumping ore on a heap leach pad, the story of Dublin Gulch is a 125-year saga of trials and triumphs that culminates in the rise of Eagle Gold, the largest gold mine ever to be built in the legendary Yukon Territory.

Like many of the tales of Yukon and Alaska's gold rush days, the Dublin Gulch journey begins with Jack McQuesten, oft called the father of the Yukon, and his partner Arthur Harper, who would establish a trading post at the mouth of the Stewart River in 1886.

It was from this outpost, that regular incursions of European prospectors began scouring the region in search of placer gold in the bars of the Stewart River and its tributaries. These pioneers would eventually make their way to Dublin Gulch.

Like many of the tales of modern gold mines, the placer gold in the streams of the Dublin Gulch area led to the discovery of high-grade veins rich enough to dig by hand and eventually the rise of large-scale mining that takes advantage of economics-of-scale and modern technologies to economically extract minute gold dispersed in large tonnages of rock.

This is the tale of Victoria Gold Corp.'s Eagle Gold Mine.

"For well over a century, generations of prospectors and miners sought to unlock the mineral potential of Dublin Gulch", said Victoria Gold President and CEO John McConnell.

In the closing two decades of the 19th century, before the first government officials would arrive, in the tradition of gold-seekers of California, the most simplistic and difficult of methods for discovery were still being employed.

Deprivation, isolation and starvation were all that met these hardy explorers, with impoverished and makeshift hovels that lacked stoves for heat or windows for light. Their livelihoods only improving when supply lines had been somewhat established.

As findings improved, more prospectors trickled into the Yukon, year after year. After the discovery of gold was found along the Stewart River, better diggings attracted them to the Fortymile, then Sixtymile, and then to the Circle district in Alaska.

Yet in August of 1896, the gold found in the Klondike valley was of such quantity that it sparked one of history's most significant gold rushes and led to the formation of a territory known as the Yukon in 1898.

While the discovery of Dublin Gulch was made slightly before the Klondike, the more famous Yukon district and the fervor for the extremely gold-rich streams found there drew most prospectors away from Dublin Gulch.

The first to lay claims on the creeks of Dublin Gulch would be Thomas Nelson and Thomas Haggart. They too, however, were drawn to the Klondike.

Afraid that their earlier claims at Dublin Gulch might be staked by newcomers, they headed back, along with Haggart's brother Peter and Warren Hiatt. A dispute, however, would arise on the trek to Dublin Gulch, splitting the party.

Peter Haggart and Hiatt were the first to arrive, making their claim on June 23, 1898. Thomas Haggart, however, holds the claim of first discovery of gold in Dublin Gulch.

The growing word of gold in the Yukon would proliferate, and many characters would come and go, betting it all and losing it all the same.

Many claims would lapse and would be restaked, countless companies would rise and fall, and dozens of men would lose their fortunes to others through litigations or subterfuge.

Placer mining, often called the "poor man's" mining method would continue off and on for decades, dwindling during World War I and becoming reinvigorated once more in the hopes of finding scraps or new discoveries.

Slipshod sluice boxes cut from hollowed out logs, wooden pegs to replace expensive nails and even flattened tins for bearings and axles for water wheels, desperation fed these men in the hopes of taking home "dust" to line their pockets.

Yet for a weeks' worth of dust amounting to nearly US$400 dollars in 1899, it's hard not to imagine the lengths someone would go for a similar amount today, roughly US$12,500.

At first a remote and isolated tributary, first worked by hand, what followed would be increasingly large-scale and sophisticated technologies, while continuing to be a steady producer of gold eventually led to hardrock mining.

There is gold in those hills

Quartz prospecting accompanied the placer activity in the shadow of Dublin Gulch, yet it would be close to a hundred years before the hardrock potential would come to be fully realized.

Hardrock or quartz mining was an altogether different matter than placer as all stages of the work would demand a greater investment of time and money in order to advance the development of a property, but the rewards, if successful, would be enormous.

According to "Dublin Gulch: A History of the Eagle Gold Mine" by Michael Gates, of which this article is largely attributed to, the earliest staking in the Dublin Gulch area for quartz was reported to have occurred in 1897 at the head of Johnston Creek, a tributary of McQuesten River.

Dozens of claims would pop up in attempts of further quartz mining, yet it would not be until 1910 when an investment of roughly a quarter million dollars in developing hardrock properties would these claims start seeing payoffs.

An article written by the Dawson Daily News at the time noted that most of the investment came from people living in the Klondike, "they are showing their faith by reinvestment."

It was looking so favorable for hardrock prospecting on Dublin Gulch that men were reported to be quitting their jobs so that they could work on the hardrock propositions.

Constant reporting by the Dawson Daily News continued to add to the enthusiasm, and fervent efforts would continue until August, 1914, when the first of the World Wars would pull away most of the men to fight in the Canadian Expeditionary Force overseas.

Interest in Dublin Gulch would see a decline as discoveries after the war further up the McQuesten valley and rich silver veins on the north side of Keno Hill became known.

The dwindling interest would not snuff out Dublin Gulch and it would continue on even throughout the 20s.

For the next several decades, however, tentative interest would remain in select groups, but things would not heat up again until close to forty years later.

Although there were speckled efforts by hopefuls with placer miners, it was not until 1968, that a block of 116 contiguous claims was restaked.

However, no worthwhile results were discovered and so the properties would continue to change through a multitude of hands and no further exploratory work was undertaken.

Through the winding and shifting of this area into the complexities of corporate today, in a search for tin and tungsten, and the rises and falls for the price of an ounce of gold, it would not be until 1991 that Dublin Gulch would once again see relit interest.

Attention on the property shifted to exploring for veins similar to the mineralization found at the Fort Knox gold deposit near Fairbanks, Alaska.

No records of drilling or exploratory work happened between 1997 and 2004 and the property remained with a company called New Millennium until July 2002 ,when First Dynasty would change its name to Sterlite Gold Ltd, only to then be acquired by StrataGold and finally land in the hands of someone who had been following the area over the course of twenty years.

Following the gold price collapse, StrataGold CEO Terry Tucker managed to find investments and pulled together the different players and the package back together again.

As gold had now jumped in price from $273 per ounce in 2000 to $836 in 2007, things were changing, and the prospects of realizing the latent potential of Dublin Gulch was becoming much more enticing.

It was at this turning point that Victoria Gold entered the scene and things would only get better.

Largest mine in Yukon history

After the Fort Knox deposit was developed, it was immediately recognized that Dublin Gulch had a similar geological formation and gold potential.

Victoria Gold Vice President Paul Gray, who joined the team in 2010 to do some consulting work, poured over data compiled from decades of Dublin Gulch exploration.

Based on this work, Gray found that by the late 1990s previous explorers had definitely identified a mineable lode of gold, but the price of gold was too low at that time.

By the time Victoria Gold acquired Dublin Gulch, the price of an ounce gold was nearing US$1,000 per ounce, nearly three times the price when exploration idled there in the 1990s. By 2011, the price of gold peaked above US$1,900/oz, strengthening the case for developing a mine at the large Eagle gold deposit at Dublin Gulch.

Conventional business models in the industry is for smaller mineral exploration companies to define the ore deposit and sell the property or the company to larger mining company, but Victoria Gold decided instead to develop the Eagle Gold Mine from start to finish.

After investing $130 million in studies, permitting, and diamond drilling, on Aug. 18, 2017 development of the Eagle Gold Mine was officially kicked off, or rather shoveled over.

With construction completed in 2019, Eagle Gold Mine at Dublin Gulch is already having a tremendous impact on the Yukon Territory.

During development, before any gold was even poured, $150 million was injected into the Yukon economy and businesses through contracting and services.

"On the surface, it was a series of significant decisions that ushered this project on its way to fruition, but behind every one of those decisions was the company's virtue of making sure it would add value to the lives of people involved," Yukon Premier Sandy Silver penned in the forward of Dublin Gulch: A History of the Eagle Gold Mine.

Further still, the royalties and taxes will further stimulate the remote area and continue to let it flourish and prosper.

Epitomizing the true Yukoner way of mining, the Dublin Gulch project has been in good standing and good relations with the areas original people, the First Nation of Na-Cho Nyak Dun, fastidiously working with them to collaborate and accommodate to work towards a common goal.

With the Eagle Gold Mine reaching commercial production on July 1, Na-Cho Nyak Dun and the larger Yukon community are realizing the benefits of Yukon's newest and largest mine. 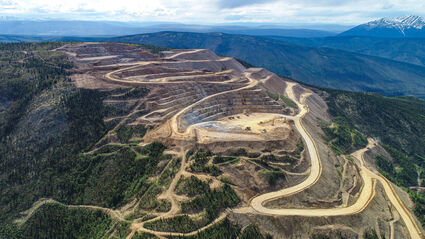 "It took years of careful consultation and negotiation between Victoria Gold and the First Nation of Na-Cho Nyak Dun to work out a solid social license between our two parties," First Nation of Na-Cho Nyak Dun Simon Mervyn wrote. "We didn't always agree, but we were patient and eventually ironed out the details that worked for both sides. We have worked with Victoria for many years establishing a mutually beneficial relationship, to the point where Victoria Gold now exemplifies the model for companies wishing to work in our traditional territory."

Roughly half of the nearly 400 workers at Eagle are Yukoners, which is a significant boost to a territory with a population of less than 40,000 people.

With the influence of the greater history of mining practically being born in the Yukon, a tribute to the efforts of the hundreds, if not thousands, of men and women who sought their fortunes and established a foundation for future generations to continue that legacy is hardly adequate in a brief article, therefore Dublin Gulch: A History of the Eagle Gold Mine is available in Yukon Bookstores; at the Eagle Gold Mine site; and on Amazon at https://www.amazon.com/Dublin-Gulch-History-Eagle-Gold/dp/1550179403.