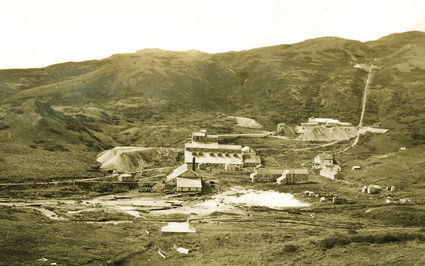 The Apollo Mine in 1914. Established in 1886, this historic mine on Unga Island in the Aleut region of Southwest Alaska was the first hardrock gold operation in the state.

Aleut Corporation is committed to promoting economic opportunities for its more than 4,000 shareholders, while preserving the traditional culture and values developed from living in a ruggedly beautiful stretch of Alaska.

The Alaska Peninsula and 167 named Aleutian Islands extending more than 1,000 miles off Southwest Alaska that make up the Aleut Corp. region form a border between the Pacific Ocean and Bering Sea. This geologically young island arc is part of the Pacific Ring of Fire, a tectonically active and mineral-rich belt that runs from the southern tip of South America to New Zealand.

Despite the 45 known volcanoes and frequent earthquakes spurred by the Pacific Ocean plate diving under the North American plate, coupled with being the birthplace for some of the wildest storms known to man, this harsh and beautiful stretch of Alaska has been home to Aleut people for thousands of years.

The Aleut region, which arcs west from the community of Sand Point to Attu, also hosts a pivotal and oft overlooked chapter of Alaska's mining history. It is home to Apollo, Alaska's first hardrock gold mine.

In addition to high-grade epithermal gold deposits such as those historically mined at Apollo, the dynamic geology that formed the Alaska Peninsula and Aleutian Islands is highly prospective for other types of mineral occurrences, such as the large porphyry systems that are an importance source of the world's copper supply.

Rose Ragsdale, a contributing journalist for Mining News, witnessed the rugged beauty of Unga Island and what remains of the legendary Apollo Mine during a visit to the nearby community of Sand Point in 2002.

"Unga Island offers breathtaking natural scenery, but abandoned buildings scattered across the lower elevations of a 170-square-mile expanse of sandy beaches, grasslands and rolling hills flanked by rugged cliffs give mute testament to the island's rich gold and coal mining history," Ragsdale reflects on this oft overlooked chapter of Alaska's past. "It is not surprising that this chillingly beautiful, but remote part of the world offers a potential treasure of sizable mineral deposits."

To survive for more than nine millennia in this rugged environment required the Aleut people to have the best clothing, dwellings, transportation and food. The ability to make highly effective clothing, boats and other essential out of the seemingly limited materials the Aleutian region has to offer speaks to the ingenuity, resourcefulness and skills of the Aleut people.

Kamleikas, "rain gear" Aleut women made from the intestines of sea mammals, allowed hunters to stay warm and dry while harvesting the sea lion, whale, salmon, halibut, cod, crab and shrimp that is the foundation of Aleut diet.

While information on the discovery of gold in the Aleut region is scarce, by 1886 the Apollo Mine was in operation there. Not only does this make Apollo the first commercial hardrock gold mine in Alaska, this Unga Island operation was in production before the Fortymile discovery that sparked the rush to mine placer gold in the state.

In recent years, Redstar Gold Corp. has been exploring a nearly 100-square-mile property that blankets two high-grade gold trends – Apollo-Sitka and Shumagin – that each cut roughly six miles across Unga Island, which is just south of the Alaska Peninsula.

Apollo-Sitka hosts the historic Apollo Mine and Shumagin is a parallel high-grade gold trend about 2,000 meters to the northwest.

Redstar has agreements that consolidate the Aleut estates with patented mining claims over the historic Apollo Mine and adjacent state of Alaska mining claims.

While Redstar has successfully shown that gold extends beyond the historic mining areas on Unga Island, the company has not explored there since 2017.

CopperBank Resources Corp., which acquired the property in 2014, is carrying forward the exploration started by Full Metal.

CopperBank Executive Chairman Gianni Kovacevic is a strong advocate for copper as a "green metal" that will see exponential growth in demand as an increasing number of devices are powered by electricity.

"I do believe the demand for copper is going to increase in the next 20 years, or thereabouts, by about 50 percent. This is simply due to the intensive electrification of global energy – the way we generate it, the way we transfer it and the way we utilize it," said Kovacevic.

He believes Pyramid is well positioned to help deliver a stream of copper into this foreseen growing demand.

"The superior location and ownership structure further demonstrate that Pyramid is one of only a handful of established copper projects that is located on private property in the United States, with the added benefit of being located only four kilometers (2.5 miles) to all-year ice-free deep tidewater," said Kovacevic.

In addition to the potential to expanding Pyramid, CopperBank is investigating San Diego Bay, a promising but much earlier stage copper target on Aleut Corp. land about six miles to the east.

Limited exploration completed has turned up some interesting results at San Diego Bay, including rock samples with grades as high as 16 percent copper and more than one g/t gold. This work included surface work carried out by CopperBank in 2017.

CopperBank is considering bringing on a partner to further investigate this property on lands owned by Aleut Corp. (subsurface) and Shumagin Corp. (surface).

To help facilitate this, CopperBank and Aleut Corp. amended the agreements for Pyramid and San Diego Bay to reflect the different stages of exploration at these two projects.

"Pyramid and San Diego Bay each require different skill sets for their respective next steps. While we can continue to cost-effectively address future work programs from shared logistics, equipment and camp facilities, this updated structure will enable CopperBank to explore all options to unlock shareholder value in each project collectively or independently," Kovacevic said in 2018.

Partnerships on mineral-rich lands such as Unga, Pyramid and San Diego Bay is a way for Aleut Corp. to achieve its commitment to promote economic, cultural, and social growth for its shareholders. 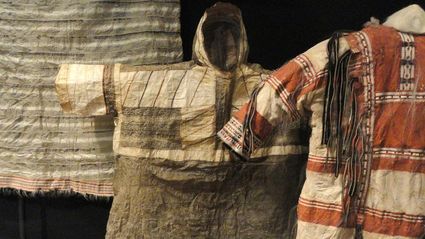 EDITOR'S NOTE: "Aleut's Ring of Fire mineral potential" is the seventh article in a 13-part series that investigates what the Alaska Native Claims Settlement Act means for Alaska's mining sector and its future. The remaining articles will dig deeper into each of the land-holding Regional corporations; the mining lands that they own; and the services they offer to the mining sector. As a life-long Alaskan that has written about mining here for more than a decade, it is my hope that this series will provide a better understanding of ANCSA and serve as a guide to mining companies seeking to do business in The Last Frontier. For further information on ANCSA see An Alaska Native claims primer for miners published in the February edition of North of 60 Mining News.