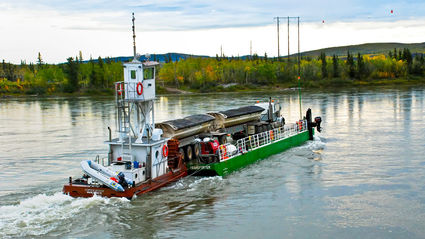 A truckload of copper concentrates from the Minto Mine is being barged across the Yukon River on its way to the Skagway Ore Terminal in Southeast Alaska.

Pembridge Resources PLC July 22 announced that it has cut a deal with Sumitomo Corp. for copper concentrates from its newly acquired Minto Mine in the Yukon.

Under this offtake agreement, Pembridge is to receive an advanced payment for at least 55,000 metric tons of copper concentrate produced by the Minto mine between now and the end of 2020.

Sumitomo will make this advanced payment in monthly installments based on 90 percent of the estimated value of concentrate produced that month, with final payment due on delivery to Japan.

The offtake is for 100 percent of the copper concentrate produced at Minto delivered on a cost, insurance and freight basis – an expense paid by a seller to insure against the possibility of loss or damage to a buyer's order while it is in transit to an export port named in the sales contract – until 55,000 metric tons are produced or the end of 2020, whichever comes later.

Last month, United Kingdom-based Pembridge announced it had negotiated a deal to acquire Minto from Capstone Mining Corp. for US$20 million in staged payments.

Capstone had wound down operations at Minto prior to the sale. Pembridge plans to have the mine back in operation by the end of this year.

Copper concentrates produced at Minto are trucked from the mine to the Skagway Ore Terminal in Southeast Alaska, where they can be loaded on ships to a refinery. In route to Skagway, the concentrate laden trucks must cross the Yukon River by barge or an ice bridge. During the spring and fall, when the ice is not stable enough to drive on, yet the river is not open enough for barges, concentrates must be stored at Minto.

The monthly advanced payments from Sumitomo will help Pembridge weather these shoulder seasons as it ramps up operations at its newly acquired mine. 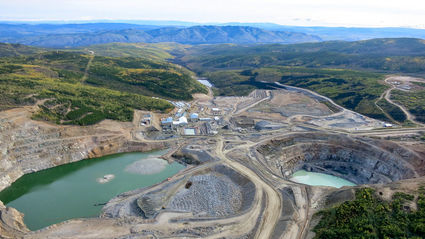 Pembridge said this initial agreement is part of a broader strategic relationship with Sumitomo, and the quantity and period of the offtake will be renewed and extended upon the completion of the prepay agreement.

"We are delighted to secure this agreement with Sumitomo Corporation, a group that shares our vision for Minto and Pembridge. With their extensive copper market experience, entering into this is an important event for Pembridge and our shareholders," said Pembridge Resources CEO David Linsley. "We look forward to developing a long-term relationship with our new partners as we seek to grow Pembridge through strategic acquisitions and development of the Minto Copper belt."