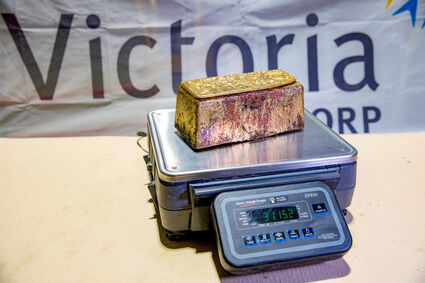 The first bar of gold poured at Victoria Gold's Eagle Mine in the Yukon weighed in at 1,001 ounces.

Victoria Gold Corp. poured the first bar of gold at its Eagle Gold Mine on Sept. 17, elevating the former gold exploration company to the echelon of gold producer.

"After all the blood, sweat and tears required to explore, develop, permit, finance and build a gold mine in Canada's North, it is extremely gratifying to pour the first gold bar at Eagle," said Victoria Gold President and CEO John McConnell.

According to a feasibility study completed prior to the start of development, this mine about 85 kilometers (53 miles) north of the community of Mayo, is expected to produce approximately 2 million oz of gold, or about 550 oz per day, over the next decade.

Considering the exploration success over the three years since the economic and engineering study was completed, Yukon's newest mine will likely continue to churn out gold bars well beyond 2029.

Victoria broke ground on pre-development activities at Eagle in 2017 and crews ramped up development of the open-pit, heap-leach pad and recovery facilities at the gold mine project in 2018.

By early July of this year, construction of Eagle Gold was complete and handed over to the operations team.

By early September, all the circuits had been tested and nearly 700,000 metric tons of ore had been stacked on the heap leach pad. The Sept. 17 pour was the first gold leached from this ore.

Crews have another 300,000 metric tons of mined ore stockpiled and is being used to accelerate the loading of the heap-leach pad.

"With this key milestone behind us, we are focused on building ore on the heap leach pad and exceeding expectations for all our stakeholders," said McConnell.

While Victoria Gold management may have shed some blood and tears during the exploration, permitting and financing of Eagle Gold, crews contributed only sweat during the construction and production ramp-up at the mine.

This achievement is especially commendable when you consider the large number of new hires that pushed mine development ahead of schedule, even through the cold and dark winter days in the Yukon.

When hiring its development and operations team, Victoria Gold focused on hiring locally.

Roughly 54 percent of the 251 operational employees hired so far are Yukoners, including several citizens from the First Nation of Nacho Nyak Dunn, whose traditional territory covers the land where Eagle Gold is located.