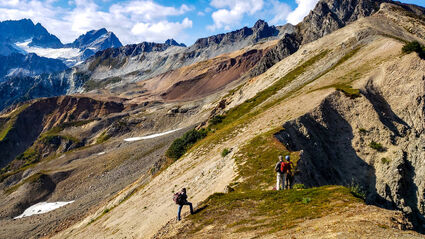 Geologists investigate the high-grade gold potential at Johnson Tract, a CIRI-owned property on the west side of Cook Inlet being explored by HighGold Mining.

With more than half of Alaska's entire population living within its region, Cook Inlet Region Inc., more commonly known as CIRI, is the most metropolitan of the 12 landholding Alaska Native regional corporations.

While CIRI has leveraged its urban position with retail developments such as Tikahtnu Commons, an enormous retail and entertainment center on the outskirts of Anchorage, the Southcentral Alaska regional corporation also has oil and gas, renewable energy and mining interests in and around Cook Inlet and beyond.

These mineral properties include the Johnson Tract property on the west side of Cook Inlet, one of the most exciting Alaska gold exploration stories of 2019.

And additional enticing mineral projects on CIRI lands will likely emerge in the near future.

"There has been cursory analysis of development potential on many of these lands and the company will continue to evaluate what properties might be ripe for exploration in the future," said Tyler.

Farewell, a base, precious and critical metals property in the western Alaska Range, is one CIRI-owned land package on the horizon.

Much like global metropolises, the CIRI region is the melting pot for Alaska's First People.

In addition to the Dena'ina and Ahtna Athabascan's who originally settled along the shores of Tikahtnu – the traditional Dena'ina name for Cook Inlet – Tlingit, Haida, Inpuiat, Yup'ik, Alutiiq and Aleut people from every corner of Alaska have moved to Southcentral Alaska over the past century. Many of these new Tikahtnu residents became CIRI shareholders following the 1971 passage of the Alaska Native Claims Settlement (ANCSA).

This diversity is reflected in CIRI's corporate vision – "A corporation rooted in the heritage and cultures of our shareholders, working toward a future where Alaska Native people thrive." – which looks beyond its own regional interests and to the wellbeing of all First People across the state.

Ensuring a future where Alaska Native people thrive, however, begins with CIRI's own success and ensuring that its shareholders flourish.

One measure of this success that CIRI is particularly proud of is the more than $1.12 billion in dividends distributed to shareholders over the years.

The Southcentral Alaska ANCSA corporation said its ability to pay out so much in dividends is rooted in "a team of young, forward-thinking people who sought to get a fair deal for their company" during CIRI's formidable years.

While being located at the hub of Alaska's economic activity is something CIRI has been able to leverage to its advantage, getting a fair lands deal in Alaska's population center was a formidable challenge for CIRI's early leaders.

Upon passage of ANCSA, CIRI was entitled to 1.25 million acres of land and 2.25 million acres of subsurface estate within its region. Much of the prime real estate around Cook Inlet, however, was already in private hands, tied up by state interests or were claimed by the federal government for things like military bases.

This left CIRI with "mountaintops and glaciers" as its choices when selecting the real estate promised to form the economic foundation for the corporation.

"A lot of the land that had been prescribed for our selection by the act had already been given away... (and) the Secretary of the Interior said that since there was no other land available, CIRI would just have to make its selections from mountainous and glaciated areas around Cook Inlet," Roy Huhndorf, president of CIRI from 1975 to 1995, recalled.

Undaunted, the early CIRI leaders fought hard for the resource-rich lands they felt they deserved under ANCSA. Both federal and state landowners were reluctant to cede properties around Cook Inlet, resulting in nearly five years of court battles and negotiations for CIRI's early leadership. This tenacity resulted in the Cook Inlet Land Exchange, one of the largest land swaps in U.S. history, which laid the foundation for CIRI success.

"CIRI's early leaders, those who negotiated the Cook Inlet Land Exchange, saw the need to move quickly and courageously," said Margie Brown, who worked in CIRI's land department from 1976 to 1995 and served as the corporation's president and CEO from 2005 to 2012. "CIRI's mission was, and is, to generate revenue to improve the social and economic status of its shareholders for generations to come."

The work needed to fulfill this mission, however, did not end with the land exchange.

After some strategic land selections in oil and gas-rich areas of Cook Inlet, CIRI's early leaders continued to show tenacity and savvy in ensuring that the ANCSA corporation (and the state) received its fair share of royalties from oil and gas production from its lands in Tikahtnu.

That strong financial foundation during CIRI's early years also helped to ensure the solvency of many of the other Alaska Native regional and village corporations around the state, thanks to special provisions of ANCSA known as sections 7(i) and 7(j).

"We are not the biggest 7(i) distributor, but we were the earliest, and a significant contributor to allowing corporations to actually stay in existence," says Brown.

In addition to giving their fellow ANCSA corporations an early financial boost, the early revenues from Kenai and other oil and gas fields in the Cook Inlet area provided a foundation for CIRI's success.

While the efforts of Brown and other early CIRI leaders was focused largely on securing oil and gas interests, they also picked up some interesting hardrock mineral properties.

One of these properties, Johnson Tract, has emerged as one of the most exciting mineral exploration stories in Alaska during 2019.

CIRI recognized the rich mineral potential of Johnson Tract during the ANCSA land selection process and claimed this gold-rich property in 1976.

This package of private lands is situated within the Lake Clark National Park.

As part of its land selection, CIRI was granted special rights, ratified by U.S. Congress and approved by the Alaska Legislature, that ensures transportation and port easements through Lake Clark National Park for the development of the rich mineral potential at Johnson Tract.

In 1981, Anaconda Minerals signed a joint venture agreement with CIRI to evaluate the precious and base metals potential identified across these tracts of land.

This was an enticing find, considering the high grades of multiple metals over such wide widths.

Westmin contemplated shipping ore mined from Johnson Tract to the operating mill at its Premier Mine in northwestern British Columbia. Both properties are near tidewater, which would have made shipping the high-grade ore to its already operating mill on the east side of the Gulf of Alaska fairly inexpensive.

Weak gold prices at the time, however, made the plan infeasible and Westmin's lease on this highly prospective property expired.

After being lost to obscurity for two decades, Johnson Tract reemerged on the Alaska exploration scene with a lease agreement signed earlier this year with Constantine Metal Resources Ltd.

"We are excited about the chance to explore and advance the project for the mutual benefit of CIRI and Constantine in a manner consistent with CIRI's cultural values," said Constantine President and CEO Garfield MacVeigh.

This commitment to cultural values and the company's record at its Palmer copper-zinc-gold-silver project in Southeast Alaska are important factors for CIRI.

"CIRI prides itself on projects that deliver economic benefits to our shareholders while respecting and preserving the land," said CIRI President and CEO Sophie Minich. "With Constantine's excellent reputation for responsible mineral exploration and development activities, we know we have chosen the ideal partner."

HighGold, which is led by longtime Constantine executive Darwin Green, will carry out a minimum of US$10 million of exploration and advance Johnson Tract to at least a pre-feasibility level over the initial 10-year term of the lease with CIRI.

While HighGold got off to a late start to the 2019 exploration season, the drilling and exploration they carried out confirmed the veracity of the previous exploration and demonstrated the even larger potential of the JT deposit.

"After this foreshortened field season, we have come away with an even greater sense of excitement about the exploration potential and have solid exploration targets in hand," said HighGold Mining CEO Green. "While the previous operator did careful and quality work, they were intensely focused on sourcing mill feed for their under-capacity Stewart, B.C mill with budgets that prioritized engineering studies over exploration. Because of this, the property remains severely underexplored with significant upside exploration potential."

Johnson Tract is not the only underexplored CIRI-owned mineral property with significant upside potential.

One of the most promising of these properties is Farewell, a property about 160 miles northwest of Anchorage where a wide variety of precious and base metals have been identified.

Both cobalt and nickel are vital ingredients in the lithium-ion batteries used to power electric vehicles and are on the list of metals that the U.S. Geological Survey have deemed critical to the United States.

Airborne geophysical surveys flown over this area in 2008 identified magnetic and electromagnetic anomalies associated with the metals found at surface, indicating a potentially large system rich in precious, base and critical metals.

CIRI owns both the surface and subsurface rights to this roughly 155-square-mile property beyond the Tikahtnu area.

Farewell is not the only CIRI-owned property with critical metals. In fact, the ANCSA regional corporation's Red Mountain land package near the southern tip of the Kenai Peninsula hosts a historic mine that provided the U.S. with a domestic source of chromium during both World Wars. 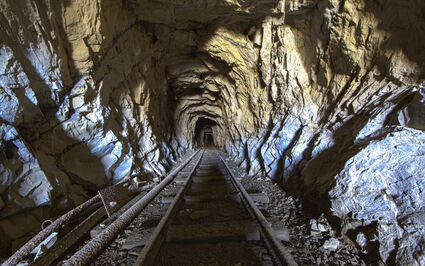 A shaft from mining at Chrome Queen, a historic mine on CIRI's Red Mountain property that provided the United States with a domestic source of chromium during both World Wars.

From 1943 through 1958, an estimated 26,000 short tons of ore averaging roughly 40 percent chrome oxide was mined from Chrome Queen and other mines at Red Mountain.

Past investigations have identified 33 deposits at Red Mountain that contain an estimated 1.5 million tons of chrome oxide.

A vital ingredient in stainless steel and superalloys, the U.S. Geological Survey considers chromium "one of the nation's most important strategic and critical materials." As such, chromium is on the USGS's list of 35 minerals and metals considered critical to America's economic and national security.

Whether it be critical metals within the CIRI region or base and precious metals beyond Tikahtnu, CIRI invites companies with excellent reputations for responsible exploration and development to take a closer look at the mineral-rich lands they have to offer.

"We welcome partnerships with companies with solid reputations as good operators who produce results," Tyler said.