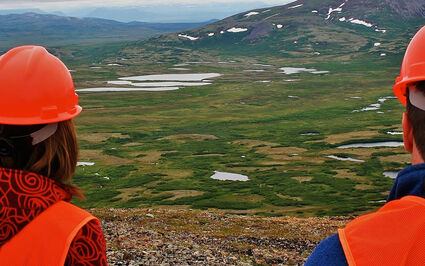 A view across the Pebble deposit area. Pebble Partnership has submitted a compensatory mitigation plan for wetlands that can not be avoided when developing a mine at this world-class copper-gold-molybdenum deposit in Southwest Alaska.

The Pebble Partnership Jan. 29 announced that it has submitted its final draft Compensatory Mitigation Plan to the U.S. Army Corps of Engineers (USACE) for the wetlands impacts associated with its plan to develop a mine at the Pebble copper-gold-molybdenum deposit in Southwest Alaska.

Compensatory mitigation refers to the restoration, establishment, enhancement, or in certain circumstances preservation of wetlands, streams or other aquatic resources as ways to offset any unavoidable impacts from building infrastructure, mines or other large projects.

Like all large development projects, the first step for designing a mine at Pebble was to avoid and minimize wetlands impacts. For example, the project changed the design of the proposed port facility and modified road alignments and bridge designs to further avoid or minimize impacts to waters and wetlands.

The next step for the Pebble team was to undertake a watershed assessment to determine potential mitigation projects that would consider the needs of the watershed for advancing and sustaining aquatic resource functions, such as the need for specific habitat restoration or water quality improvements. Following a comprehensive review of the watershed, the project team has proposed three initiatives as part of the draft mitigation plan it submitted to the USACE on Jan. 27.

The first initiative is a water quality improvement plan focused on improving wastewater management systems in three communities near the proposed Pebble Mine – Newhalen, Nondalton, and Kokhanok. The projects were identified and prioritized based on information provided in the Indian Health Service and Alaska Native Tribal Health Consortium databases and from discussions with the Lake and Peninsula Borough and affected communities.

The second initiative is for the removal of salmon passage barriers to rehabilitate up to 8.5 miles of salmon habitat. During the planning for this initiative, the project team worked with data provided by Alaska Department of Fish and Game (ADF&G) personnel to identify potential fish passage improvement projects and align the plan's objective with those of the Fish Passage Improvement Program, an ADF&G initiative aimed at identifying and rectifying barriers to fish passage. A key focus of the initiative is to rehabilitate stream habitat through the replacement of undersized or damaged culverts with new passages that fish can swim through.

The third initiative is focused on impacts in the Cook Inlet watershed and proposes to rehabilitate 7.4 miles of coastal habitat in Kamishak Bay. This will be done by removing marine debris – which can include things like containers of waste oil and other contaminants, as well as nets and ropes that can entangle wildlife – that has accumulated in large amounts on local beaches. The removal of debris will result in ecosystem service benefits to beach habitats in Kamishak Bay and the adjacent marine habitat currently used by marine wildlife.

"Our top priorities for mitigation focused on water and fish so we took a holistic approach to areas impacted by our project and wanted to improve upon existing environmental issues facing the communities closer to the project," said Pebble Partnership CEO Tom Collier. "Each initiative we are proposing tackles lingering environmental issues that might not otherwise be addressed due to local financial constraints and competing priorities in the area."

With the proposed mitigation plan submitted, it is now up to USACE to review the draft and set the final mitigation requirements needed for a permit to be issued for Pebble. If approved, the mitigation efforts outlined in the plan would need to be completed before development of the mine could begin.

Collier noted that the completion of the final draft Compensatory Mitigation Plan is one of several milestones the Pebble Mine project is expected to achieve in 2020.

Most importantly, Pebble Partnership is expecting USACE to publish a final Environmental Impact Statement for the proposed mine project, expected this summer, followed by a record of decision. 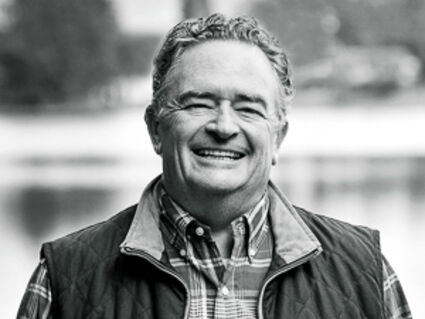 The record of decision will wrap up the federal permitting review of the Pebble Mine proposal. The project, however, will still need to obtain numerous state permits and authorizations.

"The Pebble deposit is on state of Alaska land and represents a significant opportunity for Alaskans," Collier penned in a Jan. 30 project update. "Our view is that it can be developed responsibly in accordance with all applicable local, state and federal permits. As these agencies continue their work reviewing the technical aspects of the project, the project team encourages Alaskans to keep engaged about the issues we face – and if you see something you like, please let others know."