No Canadian jurisdictions make investment attractiveness top-10 for first time in a decade; geology boosts Alaska to No. 4 North of 60 Mining News – March 1, 2020 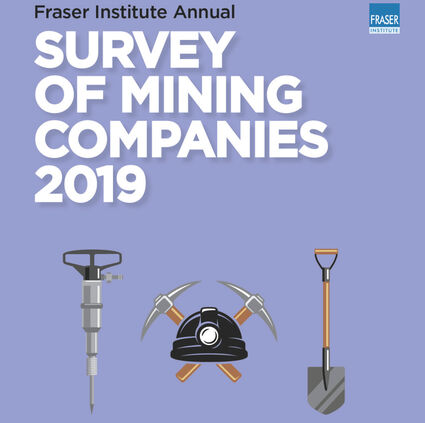 Fraser Institute has published its Annual Survey of Mining Companies, the most comprehensive report on government policies that either attract or discourage mining investors.

Canada's provinces and territories have fallen from grace in the eyes of the global mining community, according to the latest rendition of Fraser Institute's Annual Survey of Mining Companies.

For the first time in a decade, no Canadian jurisdiction ranks in the top 10 for "investment attractiveness" in the annual survey conducted by the Canadian public policy think-tank.

This report asks industry professionals from around the globe to score mining jurisdictions based on their mineral endowment and various policy topics important to mining. The investment attractiveness metric of the survey is a compilation of respondent's views on both geology and policy.

"The mining survey is the most comprehensive report on government policies that either attract or discourage mining investors," said Ashley Stedman, senior policy analyst at the Fraser Institute and co-author of the report.

The highest-ranking Canadian jurisdiction was Saskatchewan at 11th, which is down from 3rd last year; followed by Ontario at 16th, up from 20th; and Quebec at 18th, down from 4th.

The most attractive mining jurisdiction on the planet goes to Western Australia, according to the mining executives that responded to the survey.

It is this balance of attractive mining policy and rich mineral endowment that has kept Western Australia in the top five on Fraser Institute's Investment Attractiveness Index, a measure of both, for the past nine years.

"A sound and predictable regulatory regime coupled with competitive fiscal policies is key to making a jurisdiction attractive in the eyes of mining investors," Stedman said.

Except for Alaska, is was a tough year for the five jurisdictions covered by North of 60 Mining News. When it comes to attracting mining and mineral exploration investment, Alaska ranked 4th globally, up one spot from last year; British Columbia dropped one spot to 19th, Yukon dropped to 23rd, from 9th the year before; Nunavut landed at 26th, down 11 spots from 15th last year; and Northwest Territories fell to 35th, from 10th the year before.

When it comes to mineral potential, North of 60 Mining News' jurisdictions are consistently regarded as some of the richest on Earth.

In its annual survey, the Fraser Institute asks mining executives to set aside any policy considerations and provide their views of the pure geological endowment of the 76 global mining jurisdictions ranked on the latest survey.

Alaska perennially ranks highly on this part of the survey, dubbed the Best Practices Mineral Potential Index, and 2019 was no different. Respondents to the Fraser Survey ranked Alaska as 7th richest mineral province on Earth, behind Guinea, Western Australia, Indonesia, Finland, Australia's Northern Territory and Turkey.

"Alaska has been blessed by Mother Nature," Northern Star Resources President Bill Beament said in a recent interview with Mining News. "You have two of the largest undeveloped gold deposits in the world at the moment (Pebble and Donlin) and they are in a tier-one location."

The entire interview with Beament can be read in An Aussie perspective on Alaska mining, a 20 questions for 2020 interview in the current edition of North of 60 Mining News.

On the policy side of the equation, or Policy Perception Index, Alaska got the highest score it has seen in several years. This year, the Far North state was ranked 17th globally, up from 26 the year before.

Yukon (32nd); British Columbia (36th); Nunavut (44th); and Northwest Territories (50th) round out the policy rankings of the regions covered in Mining News.

The biggest policy-related issues for Alaska and the Canadian territories is infrastructure or, more accurately, the lack thereof.

Mining executives ranked Yukon's infrastructure at 48th. While well into the bottom half of the 76 world mining jurisdictions included in the 2019 Fraser Institute mining survey, this is still a much better grade than Alaska (61st); Northwest Territories (69th); and Nunavut (66th).

British Columbia, at 36th, ranks better than its northern neighbors in terms of infrastructure.

This lack of infrastructure is compounded by concerns over the environmental regulations that govern the development of mines and the infrastructure needed to support these operations.

Commenting on Alaska, the president of a small mining company said, "Companies are losing access to mineral resources due to excessive regulations and limited road access."

When it comes to "uncertainty concerning environmental regulations", Alaska is ranked 24th in the current Fraser Institute Survey of Mining Companies, or in the top third globally.

The only Canadian territory in the top half of the jurisdictions on this topic was Yukon, which came in at 37th, one place above the Democratic Republic of Congo (DRC).

"Regulatory duplication and inconsistencies in the Yukon is a major concern for investors," an exploration company president commented on Yukon.

Northwest Territories is 53rd and Nunavut is 54th in the world when it comes to uncertainty concerning environmental regulations.

Commenting on his experience in Nunavut, an exploration company president said, "Failure to coordinate decisions and outcomes by regulators hampers the permitting process."

British Columbia came in at 64th, between Indonesia and Venezuela, on this topic. Two interrelated policy areas that continue to significantly taint the views on investing in mineral exploration and mining in Canada's westernmost province are uncertainty concerning disputed land claims and environmental regulations.

It seems that the delays in approving a large oil pipeline across B.C., in particular, is weighing heavily on the minds of mining companies and investors considering whether to fund projects in the province.

"The unpredictability of the Trans Mountain project has made B.C. a feared investment jurisdiction for investors," an exploration president commented.

While the North of 60 Mining News jurisdictions are challenged by infrastructure, their rich and underexplored mineral endowments continue to capture the attention of mining companies from around the globe.

Despite Western Australia being the most attractive mining region on the planet, a growing number of Aussie mining companies are looking north to Alaska.

When you consider the roughly US$25 million South32 Ltd. plans to make in the Ambler Mining District and other exploration projects; Northern Star Resources Ltd.'s spending at the Pogo gold mine; and the exploration dollars at least five other Aussie companies are putting into the ground, at least US$100 million of exploration and development spending in Alaska is expected to flow north from Australia this year.

This is a major shift from the norm for Alaska's mining sector, which has traditionally been dominated by Canada domiciled companies.

When asked what is attracting Australian mining companies to Alaska, Beament told Mining News, "It has great geology and it is underexplored. When it comes to climatic conditions, topography and location, it has its challenges, hence why there is so much mineral potential."

It has been North American majors that have taken an interest in British Columbia and the Canadian territories.

Newmont, which emerged from its early-2019 merger with Goldcorp as the largest gold miner on Earth, has gold projects across the North. These range from a grassroots gold property near the Pogo Mine in Alaska to an equity position in the owner of a gold operation in Nunavut.

In between these geographical and mining stage extremes lies Newmont's Coffee Gold mine project in the Yukon.

Acquired by Goldcorp in 2016, Coffee is an advanced staged gold project in Yukon's White Gold District.

Newmont also bought Novagold Resources 50% percent stake in the Galore Creek porphyry copper-gold project in northwestern B.C., Teck Resources owns the other half, and is investing in GT Gold Corp., a junior exploring another Golden Triangle porphyry gold-copper discovery that is showing promise to be large and with respectable grades. 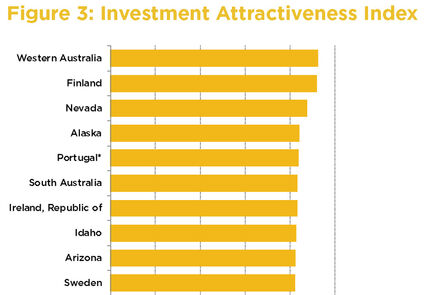 For the first time in a decade, no Canadian jurisdiction ranks in the top 10 for "investment attractiveness" in the Fraser Institute's Annual Survey of Mining Companies.

Agnico Eagle is particularly keen on investing in Canada's North, especially Nunavut. In addition to its two operating gold mines in Canada's largest territory, Agnico is investing in White Gold Corp.'s exploration in the Yukon and has two exploration properties in Alaska.

So, while B.C. and the Canadian territories have fallen from grace in the eyes of the global mining community, there is still major interest in the rich and underexplored mineral potential for which these jurisdictions are renowned.