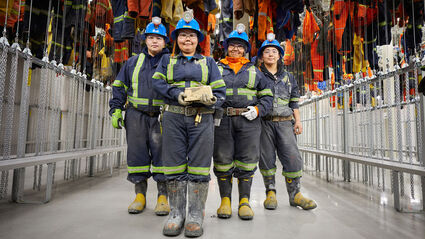 Nunavut-based workers hold a bar from the first gold pour at Meliadine, Agnico Eagle's newest mine in the territory. To prevent introducing COVID-19 to Nunavut via its mines, Agnico has sent all Nunavummiut workers home with pay.

The territories of northern Canada, so far, appear to have escaped the novel coronavirus pandemic that is currently sweeping the globe. This is due, in part, to the remoteness of the region. But it's also likely the result of extraordinary steps some mining companies are taking to keep COVID-19 out of the region.

Sabina Gold & Silver Corp., a Canadian junior aggressively seeking gold in Nunavut, for example, reported March 17 to delay the start of its 2020 exploration program targeting the Goose deposit at its Back River gold project in northwest Nunavut.

The junior mining company directed employees in its Vancouver office to work from home and opted to defer its drilling program and de-mobilize its Nunavut camp prior to the start of drilling this spring out of an abundance of caution.

"Additionally, given recent market disruptions largely driven by global impacts of the evolving COVID-19 crisis, the company has elected to decelerate its project development activities until the environment becomes more stable and better information becomes available," Sabina said in a statement.

"We believe that this is the responsible course of action for Sabina and aligns with our responsibility to our Northern stakeholders," said Sabina Gold President and CEO Bruce McLeod. "We are simply following advice from federal, provincial and territorial health authorities to do our part to flatten the curve of this virus. In addition, in times like these, people need to be with their families. Sabina is extremely fortunate in that the Back River Project remains well-funded and continues to be a standout development project that demonstrates exceptional economics and opportunity for growth. This is a fluid situation, and we will provide updates as appropriate."

McLeod also said, "Project development activities will not create any issues with existing permits or agreements, as we have a great deal of flexibility on the timeline of future development of the Back River gold project."

Sabina began 2020 with cash and cash equivalents of C$26.2 million.

Metal producers worldwide are suspending production, slowing project construction or curbing their operations to critical activities as governments impose restrictions to contain the spread of COVID-19. These companies are also cutting non-essential travel of office employees to protect them against getting infected.

Agnico Eagle Mines Ltd., operator of the Meliadine and Meadowbank gold mines in Nunavut, reported a change in its plans after the Government of Nunavut March 18 declared a state of public health emergency relating to COVID-19.

Fearing local introduction of the virus, residents of Rankin Inlet, Nunavut, reportedly blockaded a road to the Meliadine mine March 18, and briefly prevented workers flying in from southern Canada from reaching the mine.

Agnico Eagle met with local residents and government officials before taking steps to protect Nunavut residents from the exposure to the disease.

The company said it was sending all of its Nunavut-based workers at both mines and at its exploration projects in the territory home on paid leave for four weeks.

Also, miners who fly in from southern Canada will no longer deplane and enter the local airport. Instead, they will board a bus and be transported directly to the mines and stay there until they return home, according to Nunavut officials.

Agnico said the moves are intended to ensure the continued health of Nunavut residents.

In announcing the Sustainability Award, the PDAC said, "Agnico Eagle Mines is setting an example for the Canadian mining industry at its operations in Nunavut. The company's Community Relations, Education & People Development team has invested extraordinary energy and resources (in) developing its Inuit workforce and providing support for local communities."

Agnico Eagle March 25 announced it is temporarily shuttering its Quebec mines and scaling back activities at Meliadine and Meadowbank. Further details can be read in Agnico ramps down Quebec, Nunavut mines in the current issue of North of 60 Mining News.

Farther west, two diamond mines in Northwest Territories, Gahcho Kué and Diavik, reacted to the health threat posed by COVID-19 by also sending home their workers who reside in local communities on paid leave, while a third mine, Ekati, opted to altogether suspend its operations, temporarily.

The moves are part of comprehensive plans that include social distancing and hand washing that the mines have implemented to protect their operations as well as NWT communities.

Ekati's owner, Dominion Diamond Mines ULC, said it suspended operations at the diamond mine indefinitely though none of Dominion's employees had tested positive for the Coronavirus as of March 20.

"This preventative action was determined to be a necessary step given the rapid spread of the virus, the remote location of the Ekati mine's operations and the high frequency of air travel required for employees and support staff to access mining operations," Dominion said in a statement.

A minimal care and maintenance crew will stay on with Dominion to maintain the Ekati mine during this interim period.

Government of the Northwest Territories officials, meanwhile, said they put together an initial economic relief package valued at C$13.2 million to take effect immediately. The funds are intended to work in concert with federal incentives under Canada's C$27 billion COVID-19 Economic Response Plan announced in mid-March.

"The GNWT has been able to identify immediate steps we can take to waive fees, ease funding restrictions, and defer payments in order to reduce economic stress on territorial residents and businesses," said Caroline Wawzonek, minister of finance for the territorial government. "This is not a time for anyone to worry about bills or payments. Right now, we want to ensure that business who provide public services can do so safely and that employees who can stay home do so without worrying about economics."

Still farther west, the Government of Yukon closed the territory's border with Alaska on March 20 to all non-essential travel as a precautionary measure, in line with the directions on social distancing from Canadian health officials due to the pandemic.

Americans and Canadians, can cross the land border to do essential work or for other urgent or essential reasons, including workers in mining, healthcare and emergency response.

Anyone crossing the border, however, will still be subject to federal guidance on self-isolation and monitoring, Yukon officials said.

Victoria Gold Corp., owner of Yukon's sole operating mine, has activated a COVID-19 action plan at all of its work sites, including the Eagle Gold Mine in Yukon, Canada, in an effort to protect the health and well-being of its workforce and all Yukon communities.

"In light of the increasing number of cases throughout Canada and abroad, we have instituted strict Prevention Measures to protect our workforce and the local communities of the Yukon. Importantly, these Preventative Measures have, in part, enabled Eagle Mine operations to continue while mitigating the risk of COVID-19 to our employees, the community and all stakeholders," Victoria said in a statement March 24.

The moves come on the heels of a dreary near-term forecast for mining North of 60 this year, reflecting federal economists' predictions that exploration and deposit appraisal activity will decrease this year to lows not seen in recent years.

Under the spending projections, released by Natural Resources Canada Feb. 28, exploration in Northwest Territories would dip to C$52.1 million in NWT, down 21.4% from C$66.3 million in 2019, or its lowest level in a decade.

Citing the importance of stronger exploration to sustain the North's mining industry, and its contributions to employment, business and various tax and royalty benefits," Ken Armstrong, president of the NWT & Nunavut Chamber of Mines, said the chamber "has been discussing declining exploration investment with governments and other partners, and we are optimistic that with our collective efforts, we can take actions to help turn this around."