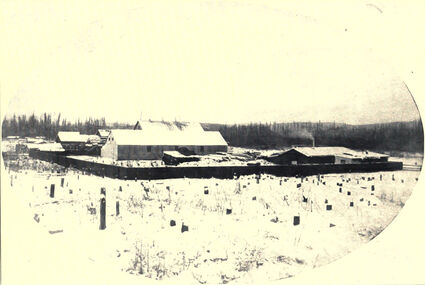 In 1902, Wise Mike Stepovich arrived at Barnette's Cache on the banks of the Chena River, an Interior Alaska trading post that would become Fairbanks, Alaska's Golden Heart City.

A true northern pioneer far from his Eastern European home, 'Wise' Mike Stepovich, settles in a new land and leaves behind a historic legacy in Alaska's Golden Heart City.

The history of Fairbanks is not unlike many other gold rush settlements, rife with rugged explorers, savvy tycoons and luckless vagabonds.

So, the melting pot of happenstance plays its hand again and begets a fascinating tale of a frontier city and a man far from home.

It is hard to say whether Stepovich would have ever made his mark in the annuls of Fairbanks history if Captain E.T. Barnette had not missed his mark while seeking to establish a trading post at Tanacross in 1901.

Unable to easily backtrack and ship his goods to his desired location, Barnette's fortuitous meeting with local prospector Felix Pedro led him to stay and set up shop and his trading post would then become the start of the Fairbanks of today.

One year later, word of the gold found just north what is now Fairbanks would cause a stampede of gold rushers seeking their fortunes, and one unexpected prospector would be counted among them.

Mike Stepovich was born into this world as Marko Stijepovic on a small hillside farm in Montenegro, a small country in the Balkan region of Eastern Europe, in 1874. At the age of 18, he stowed away aboard a ship bound for the United States, a westward adventure that would eventually bring him to Alaska.

Landing in Maryland, he made his way to Fresno, a California farm town with a community of immigrants of Balkan descent similar to his own. After spending five years as a farm hand, and along the way adopting the new spelling of his last name to Stepovich, news of the Klondike reached the western shores.

Immediately, Stepovich would quit his job and, purchasing a surplus of equipment, set off by steamer in hopes of selling supplies to the thousands of prospectors traveling north.

Arriving in Dyea, Alaska in 1897, Stepovich hired Tlingit porters to help haul his goods over Chilkoot Pass to the gold-rich Klondike.

Yet it was during this time, that a notorious outlaw by the name of Soapy Smith plagued the trails of the Chilkoot by demanding toll money from would-be victims for the right to pass. Not to be deterred by the highwaymen, Marko, now 23 years old, with his hired men evaded the blockade thus avoiding the outlaws.

It was from that moment on that Marko Stepovich would become known as his late moniker, 'Wise Mike' a name that would stick for the rest of his life.

Building a cabin and holing up for the winter, come spring, Wise Mike loaded his retinue onto a raft and drifted down the Yukon towards Dawson. During this trip, however, Stepovich would lose all his goods to the river, ultimately eliminating any of his plans and his livelihood.

Not to be undone, Wise Mike leaned on his years of experience as a farm hand, obtaining three draft horses that he used for freighting goods for the Klondike miners. After building up a sizable sum, he leased a warehouse from the Canadian government and began a salmon packing business.

Once more though, fortune would not smile on Stepovich and due to the lack of preservation, the salmon spoiled, and his business would fail in under a years' time.

He returned to freighting for prospectors and mining companies alike until, unfortunately, in early 1902 all but one of his horses became sick and died.

It was then in July that same year, news of the gold strike on the Tanana River began circulating in Dawson City. Without missing a beat, Stepovich packed up his one remaining horse and once again headed west on a steamship to Circle, Alaska.

In the fall of 1902, Stepovich arrived at Barnette's Cache, the very same Barnette who mistakenly ran ashore and set up his trading post on the Chena River about 15 miles south of Pedro Creek, the site of the gold discovery that founded Fairbanks.

With the trading post being accessible by steamboat from the Yukon, Barnette's Cache, would become the supply center for the emerging city. About the time that Wise Mike arrived, the area around Barnette's Cache was renamed to Fairbanks and the rapidly expanding region where gold was being mined and developed became the Fairbanks Mining district.

After failing once more in a potential business venture due to complications related to lack of U.S. citizenship, Stepovich leaned on his farming know-how – acquiring a property on Garden Island, where grass and grains were grown for people, milking cows and beasts of burden needed in the gold mining camps.

A year after his arrival, Stepovich began to prospect and stake mineral claims in the newly recognized mining district.

He filed his first mining claim on July 1903 near the mouth of Fairbanks Creek, at its confluence with Fish Creek. During the early years, he prospected for both lode and placer gold.

As time went on, Wise Mike would acquire more mining grounds in the Fairbanks and Fish Creek basins and when gold was discovered on Ester Creek in late 1905, many miners left their claims on Fish Creek to find wealth in the new placer gold strike in the Fairbanks district.

When claim assessment requirements were not recorded by those that left for new fields, they were considered abandoned under federal mining law and Stepovich re-staked some of them in his name – a common practice even today.

Wise Mike would later show the accuracy of his nickname as he was among a small group of Fairbanks miners that weren't just in it for the gold but also a strategic metal known as tungsten.

This metal, used in the production of steel, and due to the demand for tungsten during World War I, it became a very valuable resource and his fortunes continued to turn.

In 1915, Stepovich discovered tungsten mineralization in replacement zones in marble near a granite contact on the eastern flank of Gilmore Dome, site of the now iconic Fort Knox gold mine

And it was a prospecting friend that had told him that scheelite, the principle ore mineral of tungsten, had been identified in abundance in placers from that area and so for three years shafts were dug to acquire the mineral.

More than 2,000 feet of underground workings were driven by Mike and his mining crew to develop the zone.

The combination of hard rock tungsten, placer and lode gold mining, and real estate investments in Fairbanks had given the self-educated and hard-working Balkan immigrant well-deserved financial success.

Over a century of influence

During the World Wars and in the years that followed the price and strategic importance of Stepovich's tungsten deposits would rise and fall.

As WWI was coming to an end, the tungsten price crashed in 1918, and Mike was forced to close his hard rock tungsten operation and resume placer gold mining on Fairbanks Creek.

Yet in 1931, Mike would once again reopen the Stepovich lode and produce about ten tons of tungsten concentrates before prices fell again in 1932.

During WWII, however, Stepovich leased his tungsten lode claims on Gilmore Dome to Cleary Hill Mines Company. From the summer of 1942 to May 1944, Cleary Hill Mines produced a total of 2,196 units of tungsten oxide, nearly all from inclined shafts driven by Stepovich years earlier.

The entire production of the strategic metal was sold to the Metals Reserve Company, a subsidiary of the federal government-backed Reconstruction Finance Corp. in Washington D.C.

The importance of tungsten was not fully known before the first World War. Mines in first-world countries considered it an impurity of tin, which was vastly more economically important.

Yet chemists in Germany at the turn of the century did discover its importance and thus was born one of the most viable metals for warfare.

Thus, due to its strategic importance for metal plating and munitions, during the World Wars, if gold was discovered in a lode with tungsten, it would not catch a second glance.

Because of this, in 1942, Wise Mike was prevented from further mining. His equipment was confiscated by the War Department for government use in constructing military airfields and other infrastructure.

Stepovich decided that he would rebuild his way back in California, where he had started in the United States more than 45 years previously. He and his family then moved to Los Gatos.

Two years later, Marko 'Wise Mike' Stepovich would pass away due to a stroke at the age of 65.

Wise Mike entered the competitive and unforgiving environment of pioneering in North America and through more than 40 years of toil and setbacks, carved a place in history for himself as a capable and unrelenting man.

In 2014, Stepovich was inducted in Alaska's Mining Hall of fame and today, most economic geologists and many University of Alaska geology students that have worked in the Fairbanks area have likely visited the Stepovich lode at least once.

The gold mining activity pioneered by Stepovich has also continued to this day, as just north of the Stepovich lode, the giant Fort Knox gold-tungsten-bismuth deposit has yielded over 8 million ounces of gold to Kinross Gold Corp. and is the single largest producer of gold in the history of Alaska. 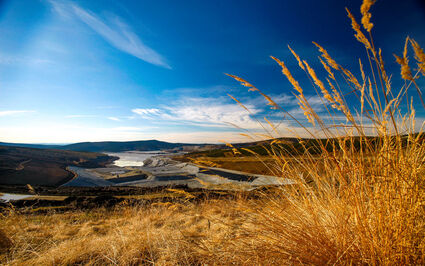 Looking over the Kinross Gold's Fort Knox Mine, which is located in the Gilmore Dome area where Wise Mike Stepovich found success tungsten mining during the World Wars.

Closer to the original Stepovich claim holdings, the Gil mineralized area, which was prospected and drift mined by 'Wise Mike' before WWI, has been found by Kinross to contain a promising deposit of hard rock gold that will continue producing until at least 2030.

Over a century later the influence that one man had on the economic history of Alaska is still being felt and his prospecting legacy will live on in the heart of Alaska.

EDITOR'S NOTE: North of 60 Mining News would like to recognize Thomas Bundtzen's excellent compilation of Wise Mike Stepovich's history for the Alaska Mining Hall of Fame. A much more comprehensive story of Stepovich's life and his Alaska legacy can be found at https://alaskamininghalloffame.org/inductees/stepovich.php. Great work Tom.