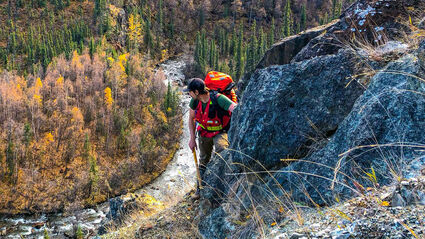 Tectonic Metals VP of Exploration Eric Buitenhuis investigates Seventymile, a large Alaska gold property the company is exploring under its partnership with Doyon.

In an unprecedented deal that offers a bit of good news for gold exploration in Alaska, Doyon Ltd. has invested US$1.5 million (C$2.1 million) to acquire a 16.1% strategic ownership of Tectonic Metals Inc., a junior exploration company currently advancing three gold projects in eastern Alaska.

An Alaska Native Claims Settlement Act (ANCSA) regional corporation, Doyon owns 12.5 million acres of land spanning Alaska's Interior, making it the largest private landholder in the state and one of the largest in the nation.

In-depth information on Doyon Ltd. and its mineral properties in Interior Alaska can be found at Doyons vast Tintina Gold Belt potential in the May 1, 2019 edition of North of 60 Mining News.

In 2018, Tectonic and Doyon signed milestone agreements that cover all the stages of a mineral property, from exploration through mine development and production. These discovery-to-production agreements for Seventymile and Northway provide surety to everyone, including a future partner who might want to mine the deposits of gold and other metals discovered.

Doyon's roughly US$1.5 million investment strengthens its partnership with Tectonic and provides capital during the COVID-19 outbreak, a global social and economic upheaval that has created turmoil for junior explorers and virtually every other publicly listed company.

"It's a joy to work on something positive like this in the midst of dealing with daily issues arising from COVID-19," said Doyon President and CEO Aaron Schutt. "The team at Tectonic has a proven track record in finding resources and working closely with First Nations in the North. Life, business and strong relationships such as Doyon's and Tectonic's will continue and thrive post-COVID-19. We are pleased to deepen the partnership with Tectonic and look forward to working with them for many years to come."

Under an agreement, Doyon acquired 10.47 million Tectonic units at C20 cents apiece, for a total investment of C$2.09 million. Each unit consists of one Tectonic share and half a purchase warrant, with each whole warrant allowing the holder to acquire an additional share for C40 cents until April 2022. These warrants are subject to an early expiration if Tectonic shares close at C56 cents or higher on the TXV Venture Exchange for ten consecutive trading days.

With this acquisition, Doyon owns a 15.9% equity interest in Tectonic and if the ANCSA regional corporation opts to exercise all its warrants, this stake in the gold explorer would increase to roughly 22.2%. Doyon, however, has agreed not to exercise any warrants that would push its Tectonic equity position above 19.99%.

For Tectonic, this financing provides 2020 exploration funds in a tough market and strengthens its bonds with a major landholder and stakeholder in Alaska.

"With Doyon as a significant shareholder, Tectonic is positioned to build value during one of the most challenging economic climates the world has ever experienced," said Tectonic Metals President and CEO Tony Reda. "We are honored and excited to have Doyon as a shareholder and partner as we continue our endeavor to be a pioneering mineral exploration company committed to high standards of environmental stewardship, early and ongoing community engagement and maximizing social and economic benefits to the communities in which we live and operate in."

For Doyon, the investment ensures continued advancement of two promising gold projects on its lands and provides it with shares of a young mineral exploration company with substantial upside potential.

"This investment in Tectonic reflects Doyon's goal of responsible economic development in our region by exploring for natural resources while also protecting and enhancing our land," said Doyon CFO Patrick Duke.

Doyon CEO Aaron Schutt and Tectonic Metals CEO Tony Reda talk with Steve Darling from Proactive Vancouver about Doyon's investment in Tectonic and the strengthening partnership between the companies.

It is expected that the Doyon investment will provide Tectonic with funds for a robust 2020 exploration program on the two Doyon properties and Tibbs, a high-grade gold project on state of Alaska mining claims within the Doyon region.

More information on Tectonic and its three Alaska properties can be found at Tectonic goes public makes gold discovery in the Dec. 1, 2019 edition of North of 60 Mining News.

Considering the explorations success so far, as well as the closer ties between Doyon and Tectonic, it is likely that additional deals between these companies are coming.

"This landmark deal is just one step of many continuing to unfold that strengthens the partnership between Tectonic and Doyon as we explore the rich mineral potential of Alaska together," said Reda.