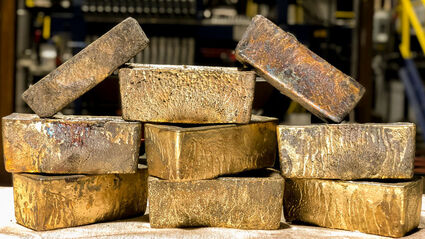 A stack of gold bars poured at Victoria Gold's Eagle Mine. The strong production at this new mine and soaring gold prices is sparking new interest in Yukon's rich mineral potential.

Ten years ago, Yukon Territory witnessed a minor stampede of mineral explorers, hoping to cash in on new gold discoveries in the White Gold District south of Dawson City.

A decade later, gold hunters are again targeting prospects across the northern Canadian territory, drawn by the recent successful startup of a new gold mine at Victoria Gold Corp.'s Dublin Gulch Property east of Dawson City in central Yukon as well as discoveries of other rich aurum deposits in Yukon.

Despite restrictions aimed at preventing the spread of the COVID-19 virus, Victoria and a few juniors have resumed their hunt this summer, pursuing intrusion-related gold properties along the prolific Tombstone Gold Belt, a swath of mineral-rich terrain within the Tintina Gold Belt that stretches from northern British Columbia across southeastern and central Yukon to southwestern Alaska.

Reporting Aug. 6 that its phase 1 drilling program will initially focus on the recently acquired Clear Creek property, Sitka said it would target intrusion-related east-west trending sheeted quartz vein systems at the Saddle and Eiger zones, where gold-in-soil anomalies were defined by earlier exploration.

The Saddle zone is defined by a 1,000- by 400-meter zone of greater than 150 parts-per-billion gold in soils, with a core zone measuring 500 meters by 250 meters of greater than 350 ppb and up to 3,740 ppb gold. The Eiger zone is defined by several gold-in-soil anomalies of greater than 150 ppb and up to 4,384 ppb within a 500-meter by 400-meter area. The drill holes are designed to test for gold mineralization at depth below and distal to historical data that includes reverse circulation holes and trenching. Historical highlights include drillhole intercepts of 22 meters of 1.24 grams-per-metric-ton gold and 88 meters of 0.65 g/t gold that bottomed in mineralization and trench results that include 2.11 g/t gold over 24 meters.

The RC Gold project is situated mid-way between the Eagle Gold mine and the shuttered Brewery Creek Gold Mine, where Golden Predator Corp. is currently working to re-start production,

"Drilling at RC Gold marks an exciting milestone for Sitka," said Cor Coe, the junior's chief executive officer. "Over the past year, we have consolidated a very impressive, district-scale land package in Yukon that is ripe for discovery with multiple new gold targets that have yet to be drilled and existing showings that have great potential for further expansion."

Noting that the Eagle Gold mine, which recently achieved commercial production, is located only 40 kilometers (25 miles) east of the RC Gold project, Coe, a former vice president of exploration at Golden Predator, said Yukon is a very favorable jurisdiction for mining, and is currently experiencing renewed interest from both junior and major mining companies.

"Sitka is well-positioned within this new wave of activity in Yukon, where management has a long history of exploration, discovery and development," he added.

Sitka Gold also reported Aug. 18 that it acquired the OGI property, located just off the Dempster Highway, about 50 kilometers (33 miles) east of Dawson City and one kilometer (0.62 mile) north of the Brewery Creek mine. This expands Sitka's land position within the Tombstone Gold Belt to roughly 356 square kilometers (137.4 square miles). The target at OGI is an intrusion-related gold deposit and also a SEDEX-style, stratabound zinc-lead-silver deposit, similar to Howards Pass and many other zinc-rich base and precious metal occurrences within Yukon's Selwyn Basin.

Victoria Gold, meanwhile, made an early, unscheduled US$10 million repayment of interest and principal toward its senior secured debt.

"We are advantaged to be in the final stages of ramping up the Eagle Gold Mine to full production of over 200,000 oz of gold annually at a time of record-breaking gold prices," Victoria President and CEO John McConnell said in early August. "The substantial free cash flow provided by the wide profit margins we are achieving has put us in a position to accelerate debt repayment."

At Dublin Gulch, Victoria has continued exploration this year of its Raven prospect in the Potato Hills Trend with step-out diamond drilling and surface trenches at high-grade, near-surface gold showings and reported favorable results. Gold assays from 1,094 samples and the first five step-out drill holes include high-grade gold intersections in every one of the holes. The results range from 34.60 grams per metric ton gold over 0.6 meters to 2.25 g/t gold over 10.3 meters, along with long intercepts of gold mineralization from surface, including 0.43 g/t gold over 199.5 meters and 0.42 g/t gold over 240.8 meters.

Victoria's 2020 campaign at Raven, so far, has included 17 diamond drill holes totaling more than 4,040 meters, more than 2,500 meters of surface trenches; 2,026 soil samples from Dublin Gulch East; access construction to the Lynx target and establishment of a Lynx camp. A third diamond drill rig is focusing on drill testing of Dublin Gulch East targets, including Nugget, Whiskey Wrinkles and Lynx. Exploration is planned to continue into the fall.

Only 20% explored, Golden Culvert covers 84 square-kilometers along a 24-kilometer (15 miles) of a mineralized trend. The all-season Cantung Mine Road runs through the property. 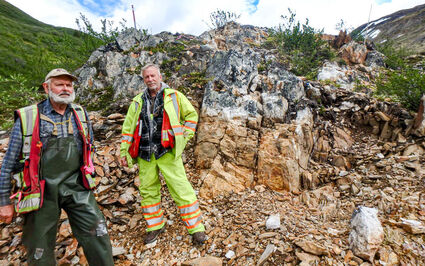 Prospector Gary Lee, who co-discovered gold mineralization at Golden Culvert, and Stratabound Minerals President and CEO Kim Tyler at the Golden Culvert Discovery vein. Sampling of this outcrop has returned assays as high as 22.8 g/t gold.

In the current drill program – the second phase of its 2020 exploration campaign – Stratabound aims to complete infill definition drilling within the previously drilled and trenched area to define an initial NI 43-101 resource estimate, and drill beyond the open-ended strike length to about 800 meters and below the 150-meter vertical depth previously drilled from surface.

Earlier this summer, the junior collected 116 soil and 157 rock samples and conducted ground geophysics and geological surveys on property-wide targets across the underexplored 24-kilometer (15 miles) strike length extending from both sides of the project's Main Discovery area that has been the focus of close-spaced, detailed work conducted to date.

"We are more mine developers and operators by experience than explorationists and, as evidence continues to support it, we view the Golden Culvert through the perspective of moving it from advanced exploration to a development stage gold mining project," Kim Tyler, Stratabound's president and CEO, said in announcing the 2020 drill program.