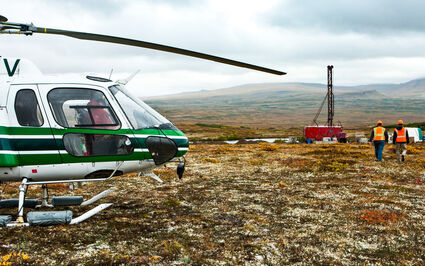 Environmental Investigation Agency posed as deep pocketed investors in an undercover operation to get Pebble executives to reveal a plan for a much larger mine at the Southwest Alaska copper project.

A pitch to deep-pocketed investors about the potential to develop a world-class mine at the Pebble copper project in Alaska turned out to be a clandestinely videotaped sting operation that compromised the integrity of Pebble Limited Partnership CEO Tom Collier.

A pair of operatives for the Environmental Investigation Agency, a United Kingdom-based environmental group, posed as representatives of a Hong Kong-based investment firm with links to a company owned by the Chinese government and secretly videotaped conversations with Collier and Northern Dynasty Minerals President and CEO Ronald Thiessen.

Masquerading as deep-pocketed foreign investors, the actors worked to entrap the two executives into stating there is a defined plan to expand Pebble beyond the 20-year mine life currently being permitted under a federal process being led by the U.S. Army Corps of engineers.

The environmental investigative group says the secret recordings it released on Monday, dubbed the Pebble Tapes, sometimes contradict Collier's public statements about the scope of a mine at Pebble.

"These tapes show that potential investors are given an entirely different vision for this massive mine than the government and the public," said EIA Executive Director Alexander von Bismarck.

Thiessen said that Pebble Partnership have no current plans for mine expansion and if a decision is made in the future to extend the life of the mine, Pebble owners would need to once again go through an extensive permitting process.

"The mine development proposal currently being evaluated by the USACE, and for which we expect a final record of decision this fall, provides for 20 years of mining at an average daily throughput of 180,000 tons, and processing of 1.3 billion tons of mineralized material," Thiessen said. "What we have said consistently, and is reinforced in the 'Pebble tapes' released this week, is the operator of the Pebble mine may decide at some point in the future to propose additional phases of development, but there exists no formal plan to do so today."

Perhaps the most damaging comments made by Collier, however, relate to his and the Pebble Partnership's relationships with elected officials and federal representatives in Alaska, including Gov. Mike Dunleavy, U.S. senators Lisa Murkowski and Dan Sullivan, and senior representatives of the US Army Corps of Engineers, the regulatory agency leading the federal permitting process for a mine at Pebble.

Finding Collier's comments and embellishment of Pebble Partnerships offensive to political, business and community leaders in the state and for this, Northern Dynasty apologized profusely to Alaskans and accepted the resignation tendered by Collier on Sept. 22.

"The unethical manner in which these tapes were acquired does not excuse the comments that were made, or the crass way they were expressed," said Thiessen. "On behalf of the company and our employees, I offer my unreserved apology to all those who were hurt or offended, and all Alaskans."

With Collier stepping down, Pebble Partnership's original CEO John Shively has resumed his role as the company's top executive.

A former commissioner of the Alaska Department of Natural Resources, senior executive with NANA Regional Corp., and current director of the Alaska Railroad Corp., Shively says Pebble is too important to the region and the state not to proceed, and for every effort not to be made to develop the project responsibly in the best interests of all Alaskans.

"My priority is to advance our current plan through the regulatory process so we can prove to the state's political leaders, regulatory officials and all Alaskans that we can meet the very high environmental standards expected of us," he said.