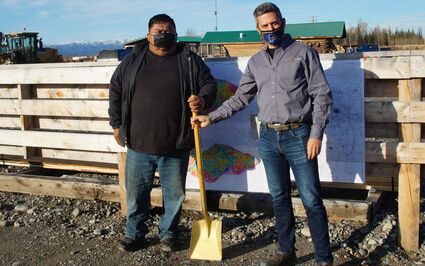 Village of Tetlin Chief Michael Sam and Kinross Gold Fort Knox Mine General Manager Jeremy Brans during a partnership ceremony at the Peak Gold project in Alaska on Sept. 29.

Kinross Gold Corp. has agreed to pay US$93.7 million to buy a 70% stake in the Peak Gold project near the crossroads town of Tok in eastern Alaska, an acquisition slated to deliver high-grade feedstock to the mill at Kinross' Fort Knox Mine near Fairbanks.

"The relatively high-grade, low-cost Peak Gold project is an excellent addition to our portfolio, as it allows us to leverage our existing mill and infrastructure at Fort Knox and strengthens our medium-term production and cash flow profile," said Kinross Gold President and CEO Paul Rollinson. "The project is also expected to add to our strong record of socioeconomic contributions to our host communities in Alaska, one of the top mining jurisdictions in the world."

With ore grades decreasing at Fort Knox in recent years, Kinross has shifted gold recovery at this Interior Alaska operation increasingly toward heap leach gold and planned to shut down the mill in the near term. Blending of higher-grade ore from Peak Gold, which lies alongside the paved Alaska Highway about 250 miles southeast of Fort Knox, will extend the life of the mill and increase the operation's gold output in the coming years.

Based on this resource, Kinross expects to produce 1 million oz of gold-equivalent, which includes the value of both the gold and silver recovered, from Peak Gold ore over a 4.5-year mine life, or roughly 222,000 oz per year.

The lack of need for a mill and tailings facility on the Tetlin property where the Peak Gold deposits are located will reduce the environmental footprint and simplify the permitting process.

As a result, Kinross expects to have Peak Gold ready to deliver ore to the Fort Knox mill in 2024. This is expected to significantly boost the gold production, and provide additional jobs and economic opportunities in Alaska.

"Kinross has been responsibly operating and contributing to the state's economy and communities for almost a quarter of a century, and with Gilmore, and now a new project, we are very excited about our future in Alaska," Anna Atchison, manager of external affairs at Fort Knox, told Mining News.

Prior to Kinross' buy-in, Peak Gold was being advanced under a joint venture between Contango ORE Inc. (60%) and Royal Gold Inc. (40%).

To acquire a 70% operating interest in Peak Gold, Kinross acquired all of Royal Gold's interest in the JV, plus 809,744 Contango ORE shares held by Royal Gold, for US$49.2 million.

In addition, Kinross agreed to buy half of Contango ORE's JV ownership for US$44.5 million, which includes US$32.4 million in cash and the 809,744 Contango ORE shares it acquired from Royal Gold.

The shares Kinross shuttled between the former Peak Gold JV partners represent about 11.9% of Contango ORE's outstanding shares prior to the transaction.

The cash portion of Contango's payment for a 30% stake in Peak Gold includes a US$1.2 million prepayment for a new royalty on silver revenues from the project.

"We believe we have sufficient cash to meet our near-term funding obligations for Peak Gold and to explore for new resources. I am very excited about the future for CORE, including its new partnership with Kinross," Van Nieuwenhuyse added.

Kinross' 70% JV interest only includes the lands leased from Tetlin Village, which hosts the Peak Gold deposits and several other prospects and occurrences.

Kinross said that it has held productive meeting with the people of Tetlin and members of the village council are highly supportive of Kinross joining the Peak Gold partnership.

"We look forward to the safe and responsible development of the project and the positive benefits it is expected to generate for our community," said Village of Tetlin Chief Michael Sam. "We also look forward to further building a relationship with Kinross, a company with a strong track record in Alaska, and are pleased to see further investment plans for the project."

The new majority owner of the Peak Gold JV plans to collaborate with the people of Tetlin to come up with a name for the Peak Gold project that recognizes the culture and values of the people that own the land where the mine is to be developed.

In order to further develop the resource base at Peak Gold, Kinross is preparing to begin an infill, geotechnical and metallurgical drill program there.

The company is also planning to focus on targets across the larger land package identified by previous sampling, mapping, and geophysics.

Initial permitting activities are also expected to get underway soon and Kinross expects to complete permitting and a feasibility study by the end of 2022.

Based on the expected heap leach recoveries detailed in a 2018 feasibility study, the added mill production from Peak Gold ore could boost Fort Knox gold output well above 400,000 oz per year from 2024 through 2027, which would taper off with less heap leach gold until 2030.

Kinross estimates initial capital costs for the Peak Gold mine will be US$110 million and calculates that the all-in sustaining costs per ounce of gold-equivalent recovered will be US$750.

In addition to bolstering its cash position to roughly US$35 million, bringing on a top tier gold mining partner with short term production plans for Peak Gold, and receiving a silver royalty interest in the production, Contango ORE also gains 100% interest in 170,000 acres of state mining claims that were once part of the Peak Gold JV.

The state mining claims were moved out of the JV and transferred to Contango ORE prior to the transaction.

These claims include several advanced stage exploration targets – Hona, Eagle and Triple Z – that have been well defined by exploration carried out by Contango ORE and others.

During the 2019 field program, the Peak Gold JV carried out reconnaissance rock sampling and mapping to follow up on grades as high as 9.9 g/t gold in pan samples collected from streams draining the Hona prospect. These efforts identified extensive sulfide mineralization over 5,000 meters of strike with gold, copper, and silver mineralization. Rock samples collected from the area returned assays as high as 12.5 g/t gold, 10.1% copper, and 494 g/t silver.

Both holes encountered gold-silver-copper mineralization, with the most encouraging intercept being 17 meters of 0.41 g/t gold, 5.4 g/t silver and 0.33% copper in the second hole.

CORRECTION: This article has been updated to describe Tetlin Village Council as a tribe instead of an Alaska Native corporation. 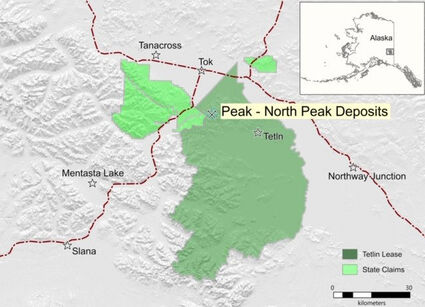