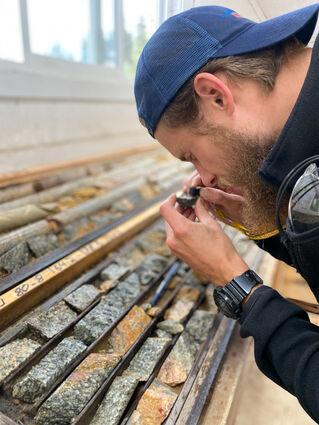 Granite Creek Copper's first phase of 2020 exploration included relogging and resampling of core from drilling carried out by previous explorers of the Stu property.

When Granite Creek Copper Ltd. decided to refocus its energies on finding copper in Yukon Territory in October 2018, it swung into action, aggressively tackling its vision of becoming a leading copper exploration company. Just over two years later, the junior has acquired the advanced Carmacks Copper Project and is hoping to establish a mineral resource estimate on its larger Stu Project next door.

To begin its transition, the junior changed its name from Granite Creek Gold Ltd. to reflect its new direction and graduated from the NEX Exchange to the TSX Venture Exchange by completing a C$1.8 million financing and purchasing the 111 square-kilometer (42.85 square miles) Stu copper-gold-silver project from Yukon prospector Bill Harris. The Stu property is located 210 kilometers (130 miles) north of Whitehorse and 47 kilometers (29 miles) north of Carmacks.

Granite Creek also teamed up with other companies in the Metallic Group of Companies, a collaboration of precious and base metals exploration companies, with a portfolio of large, brownfields assets in established mining districts adjacent to some of the industry's highest-grade producers of silver and gold, platinum, palladium, and copper.

In early 2019, Granite Creek acquired an extensive private database compiled from work performed by previous operators on the Stu property, dating back to the 1980s.

The Stu property is on trend with Pembridge Resources Ltd.'s' high-grade Minto Copper-Gold Mine to the north and Copper North Mining Co.'s advanced-stage Carmacks copper-gold-silver project to the south. Stu also has excellent access to infrastructure with the nearby paved Yukon Highway 2, along with grid electrical power within 12 kilometers (seven miles) of its border.

Shortly afterward, Granite Creek acquired a 30% interest in Copper North Mining Corp., owner of the Carmacks Copper Project, which is adjacent to the Stu property to the south.

Despite the challenges presented by the Covid-19 pandemic in 2020, which included costly operating requirements and drilling equipment shortages, Granite Creek made substantial progress in exploring the Stu property. A phase 1 exploration program, launched in mid-July, included re-logging and re-sampling of historic core, multi-element soil sampling to determine the precious metal response in soils, and the refinement of target sites for potential follow-up diamond drilling later in the year.

The explorer found that past operators at Stu selectively sampled only 20-30% of the core obtained in drilling the highly prospective Zone A in 1980.

Granite Creek located a significant portion of the highest-grade core and completed an extensive program of re-logging and re-sampling, including analysis of core that had not been previously sampled.

"We were able to go back and resample the bulk of that core," Johnson said in October. "We also suspect the process used in the '80s missed a lot of precious metals, at least, that's our hope."

The company took multiple measurements consisting of near-infrared spectral analysis, magnetic susceptibility, conductivity, and x-ray fluorescence on more than 1,400 meters of core systematically collected over entire holes. The samples were shipped to the assay lab for full multi-element analysis, including fire assay for gold.

"Basically, we did a 1,400-meter drill program without turning any steel, and we're pretty pleased with that," Johnson told investors.

He said the company found significant gaps in the earlier analysis and hopes "to convert trace indicators into a resource."

Granite Creek will use data from this program to further its understanding of structural controls, alteration, and metal distribution within the mineralized zones on the Stu property, Johnson added.

In October, the explorer mobilized a diamond core drill rig and crew to the Stu copper-gold project for the company's inaugural drilling and trenching program. The program is following up and expanding upon drilling completed on the high-grade A Zone in 1980. Once completed, the Granite Creek results will be tabulated with results from the summer re-logging and re-assay program to form the basis of a 2021 resource delineation drill program. Core samples from the initial holes have been sent to Bureau Veritas for assaying, with results expected in the latter part of November and over the ensuing weeks.

"With the data obtained from the current program added to historic drilling on the Stu project, we will be in a strong position to launch a resource definition drill program in 2021," Johnson said in an Oct. 29 statement.

Granite Creek also agreed to acquire all outstanding shares of Copper North Mining in a transaction slated to close on Nov. 30. The deal gives the junior control of a large land package, including the advanced-stage Carmacks copper project and the Stu copper-gold project, within the Minto copper district.

"We're now working to get a better understanding of the Minto Copper Belt," Johnson told investors in October.

Granite Creek said it expects synergies from the combination to include: 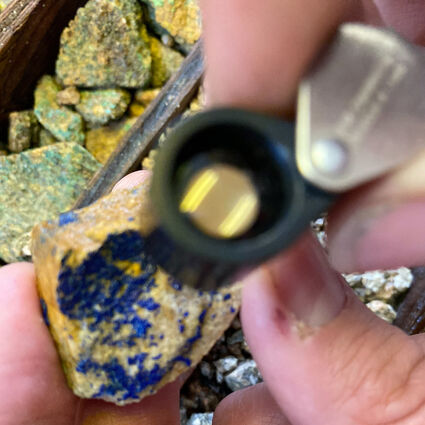 Copper mineralization in core from historical drilling at Stu.

• Improving the potential to quickly build resources on the combined land packages, including mineralized zones near and potentially overlapping existing claim boundaries between the projects; and

• Strengthening and consolidating management and technical teams, including resources made available through the Metallic Group.

Johnson said Granite Creek feels good about its approach to Yukon exploration because it gives the company multiple exit strategies.