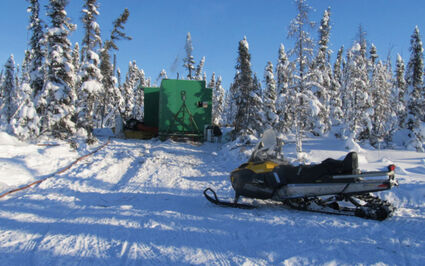 Yellowknife-based NorthTech Ltd. set up a rig for the first hole of 2021 drilling at the Tardiff zone on the Nechalacho rare earths project in Canada's Northwest Territories.

On track to begin the initial phase of rare earth production at the Nechalacho project in Northwest Territories later this year, Vital Metals Ltd. has launched a drill program to prepare for the second stage of REE mining at the project along the shores of Thor Lake.

Nechalacho is a rare earths and critical metals enriched project that has been explored extensively by Canada-based Avalon Advanced Materials Inc. This work outlined near surface REE mineralization in the T-Zone and Tardiff zones, and the larger but deeper Basal zone.

Cheetah Resources Pty Ltd., a private Australian company acquired by Vital, paid C$5 million for ownership of the near surface resources at T-Zone and Tardiff.

Vital, however, will be the first to mine rare earths and other critical elements from Nechalacho.

This mining is slated to begin this year at North T, a subzone that hosts 105,000 metric tons of resources averaging 8.9% (9,345 metric tons) total rare earth oxides.

Vital plans to use an ore sorting machine as a low cost and simple means to significantly upgrade the ore.

This upgrade intermediary product will be upgraded at Vital’s rare earth extraction plant in Saskatchewan before being shipped to REEtec, a Norway-based company that has developed a completely new and game changing process for manufacturing high purity rare earths.

Earlier this month, Vital and REETec signed a definitive offtake and profit-sharing agreement for the production of 1,000 metric tons of rare earth oxides per year from concentrates shipped from Nechalacho and provides the option to increase the volume to 5,000 metric tons REO per year.

"The signing of this agreement will enable REEtec and Vital to work together to supply separated rare earth oxides, which are competitive to products produced anywhere else in the world into the electric vehicle and wind turbine markets," said Atkins.

More information on this agreement can be read at An international REE partnership in NWT in the February 3 edition of Metal Tech News. https://www.metaltechnews.com/story/2021/02/03/tech-bytes/an-international-ree-partnership-in-nwt/459.html.

Tardiff, which lies above the Basal zone, also contains zircon and niobium grades that are comparable with other polymetallic rare earth projects.

While testing the lower Basal zone, Avalon drilled multiple holes fanned out from widely spaced drill pads. While this provided good coverage of Basal, the focus of Avalon's work, this strategy resulted in tight clusters of holes just below each pad at Tardiff. 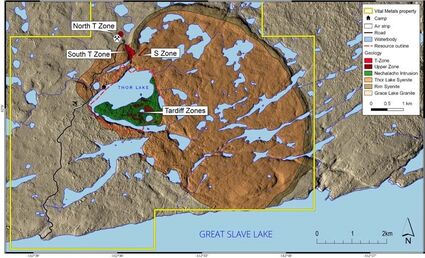 To fill in and upgrade the resource between the pads, Vital plans to complete about 1,800 meters of drilling in 30 holes focused primarily on higher grade subzone of Tardiff with 3.2 million metric tons of resource averaging 2.4% REO. The company also plans to evaluate the expansion potential at T Zone with holes targeting South T and S, zones adjacent to the Nechalacho stage-1 pit at North T.

In addition to assays, the core will be used for metallurgical testing.

"The commencement of this drilling program marks the start of development activities for the larger stage-2 operation," said Atkins.

CORRECTION: This article has been updated to include the upgrade of REE concentrates at Vital’s rare earth extraction plant in Saskatchewan.